The flame of a gas burner helps inflate a hot air balloon as part of a re-enactment of the first Albuquerque International Balloon Fiesta in 1972 during a special event at Coronado Center in Albuquerque. (AP Photo/Susan Montoya Bryan)

Hundreds of hot air balloons are scheduled to lift off Saturday morning, marking the start of an annual fiesta that has drawn pilots and spectators from across the globe to New Mexico’s high desert for 50 years now.

As one of the most photographed events in the world, the Albuquerque International Balloon Fiesta has become an economic driver for the state’s largest city and a rare — and colorful — opportunity for enthusiasts to be within arm’s reach as the giant balloons are unpacked and inflated.

Three of the original pilots who participated in the first fiesta in 1972 and the family members of others are among this year’s attendees. That year, 13 balloons launched from an open lot near a shopping center on what was then the edge of Albuquerque. It has since grown into a multimillion-dollar production. Crew members inflate a hot air balloon as part of a re-enactment of the first Albuquerque International Balloon Fiesta in 1972 during a special event at Coronado Center in Albuquerque. (AP Photo/Susan Montoya Bryan)

Pilot Gene Dennis, 78, remembers the snow storm that almost caused him to miss that first fiesta. He had to rearrange his flight plans from Michigan so he could make it to Albuquerque in time.

The weather was perfect when he got to New Mexico, said Dennis, who flew under the alias “Captain Phairweather.” He was quoted at the time as saying he had brought good weather with him.

He’s on the hook again, as pilots hope predictions for opening weekend are fair.

“Ballooning is infectious,” Dennis said, describing being aloft like drifting in a dream, quietly observing the countryside below.

This year will mark Roman Müller’s first time flying in the fiesta. He’s piloting a special-shaped balloon that was modeled after a chalet at the top of a famous Swiss bobsled run. One of his goals will be flying over the Rio Grande and getting low enough to dip the gondola into the river. Denise Wiederkehr McDonald, center left, prepares for a re-enactment of the first Albuquerque International Balloon Fiesta in 1972 during a special event at Coronado Center in Albuquerque, New Mexico. Wiederkehr’s father was among the original 13 pilots to take part in the first fiesta. (AP Photo/Susan Montoya Bryan)

“This is my plan,” he said, with a wide smile while acknowledging that it’s not always easy to fly a balloon.

One thing that helps, he said, is the phenomenon known as the Albuquerque box — when the wind blows in opposite directions at different elevations, allowing skillful pilots to bring a balloon back to near the point of takeoff.

Dennis said it took a few years of holding the fiesta to realize the predictability of the wind patterns allowed for balloons to remain close to the launch field, giving spectators quite a show.

Denise Wiederkehr McDonald was a passenger in her father’s balloon during the first fiesta. She made the trip from Colorado to participate in a re-enactment of that 1972 flight on Friday. Her father, Matt Wiederkehr, was one of the first 10 hot air balloon pilots in the U.S. and held numerous world records for distance and duration and built a successful advertising business with his fleet of balloons. 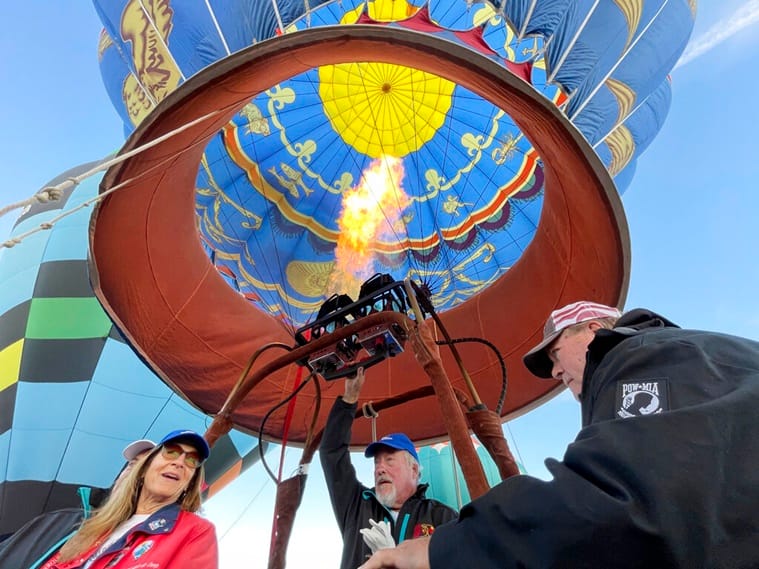 Wiederkehr McDonald, who went on to set her own ballooning records before becoming a commercial airline pilot, was wearing one of her father’s faded ballooning jackets and held a cardboard cutout of him as the balloon she was riding in lifted off.

She recalled a childhood full of experiences centered on ballooning.

“I remember the first time being down in the balloons with them all standing up and inflating and not being able to see the sky because it was all colored fabric. And then the other thing was the first balloon glow at night. Oh, my gosh,” she said. “There were a lot of firsts that I took for granted back then but really look back and appreciate so much now.” 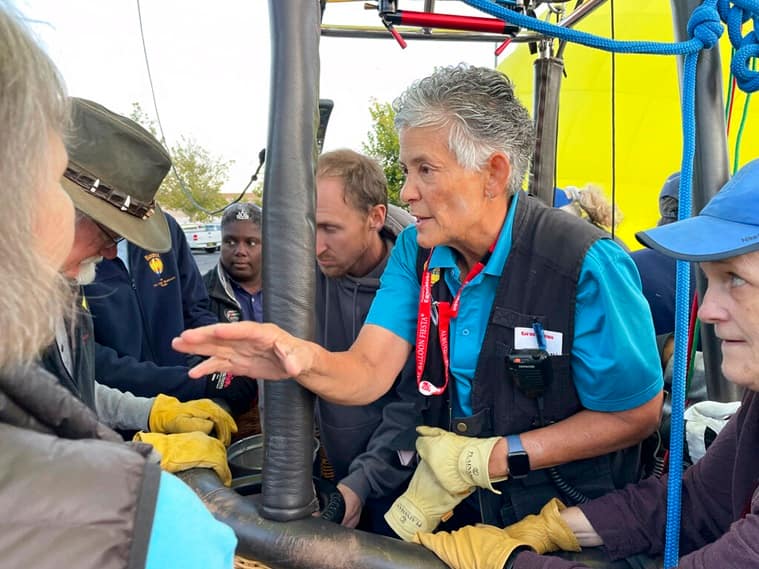 The fiesta has grown to include a cadre of European ballooning professionals. More than 20 countries are represented this year, including Switzerland, Australia, Brazil, Croatia, Mexico, Taiwan and Ukraine.

It also serves as the launching venue for the America’s Challenge Gas Balloon Race, one of the world’s premier distance races for gas balloons.