The 17 Indians, including eight women and nine men in mid-to-late 20s, are university students, techies, researchers, executives and greens with a common cause to save earth from ill-effects of greenhouse emissions, rapid urbanisation, excess consumption of natural resources and changing lifestyle. 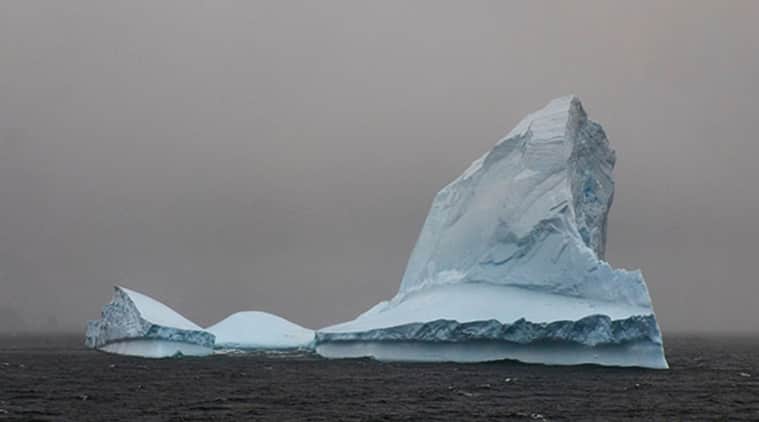 Cruising along the edge of the world, the ship reached the Deception Island, sitting on a dormant volcano and where the illegal whale industry once thrived. (Source: 2041 Foundation/IANS)

Seventeen young Indians have returned from Antarctica with breath-taking stories of its icebergs, icy winds, weather and inhabitants – penguins, seals, whales and sharks.

“It’s an out of the world experience. It’s like being to another planet, where nature opens up its treasures and beckons humans to discover the earth’s last great wilderness,” International Antarctica Expedition (IAE) member D. Chandrika said.

Chandrika cruised back to Ushuaia in Argentina on Friday from the 12-day adventurous trip, with 149 other members from 26 countries.

The 17 Indians, including eight women and nine men in mid-to-late 20s, are university students, techies, researchers, executives and greens with a common cause to save earth from ill-effects of greenhouse emissions, rapid urbanisation, excess consumption of natural resources and changing lifestyle.

Organised by the US-based 2041 Foundation under the leadership of veteran polar explorer and British environmentalist Robert Swan, the expedition studied the impact of climate change due to global warming for promoting renewable energy sources, sustainability and preserve the earth’s fragile ecosystem.

Swan, 60, the first person to set foot on North Pole and South Pole in 1989, set up the Foundation in 1991 to preserve Antarctica by promoting recycling, renewable energy and sustainability to combat affects of climate change. Setting off in ‘Ocean Endeavour’, the luxury ship navigated by 50 crew members, from Ushuaia, the world’s southernmost town, the expedition sailed on March 14 towards the Antarctica Peninsula crossing the stormy Drake Passage and entering the blue waters of the ocean with no land in sight anywhere. 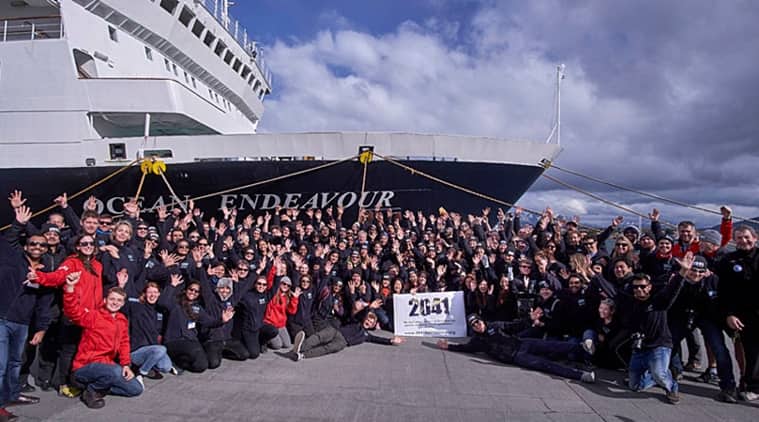 A team of 150 members from 26 countries on board Ocean Endeavour cruise before sailing to Antarctica from Ushuaia in south Argentina. (Source: 2041 Foundation/IANS)

“In the midst of the ocean, we spotted the first iceberg near Land Ahoy Island, making everyone hit the deck and brave the icy winds to watch the floating spectacle, with huge twisted forms of ice in many layers and markings, revealing their age and origins,” the 28-year-old astrophysicist from Pune recalled with awe. Cruising along the edge of the world, the ship reached the Deception Island, sitting on a dormant volcano and where the illegal whale industry once thrived. Covered with ash and other volcanic remnants, the desolate place is home to hundreds of penguins and seals amidst floating glaciers around the island.

“I found it surreal to walk next to those wild animals, which are not used to humans. They showed no interest in us or fear as they were in their own rightful place,” French photographer Josselin Cornou, a part of the 2016 expedition, posted in the official blog.

On the following day, the ship entered Port Forester Island through Neptune’s Bellows, where a volcanic crater’s walls were breached by the mighty sea. The island was discovered in 1819-20 by explorer William Smith.

The expedition also landed at Telefon Bay, a stunning landscape made of ash and snow. About 100 and odd members of different nationalities disembarked from the ship and headed in zodiacs to the snow capped island, swarmed by Gentoo penguins, a napping Weddel Seal and the territorial fur seals. “The lifetime expedition is educative as we saw the impact of climate change on Antarctica due to emissions from industries and power plants on other continents and the need to combat them with technologies like carbon capture and storage,” another IAE member, Aarthi Rao, a green activist from Hyderabad, said.

According to Swan, decorated the British Order of Empire, the purpose of the expedition was to engage and inspire the next generation of leaders to take responsibility to build resilient communities and save Antarctica. “We have seen hundreds of Humpback, Minke, Fin and even Orca whales on the Petermann Island, a low-laying island surrounded by blue icebergs. Every new creature revealed the beauty of these incredible animals,” Eitan Rovero-Shein, a 25-year-old Mexican, wrote in the blog with amazing pictures.

On the final leg of the expedition, some members, including Indians from a tropical land, plunged into the freezing waters at sub-zero temperature.