The rich history of Gond art and its evolution

Today's Gond art is not a mere tradition but has a very new and contemporary element attached to it. 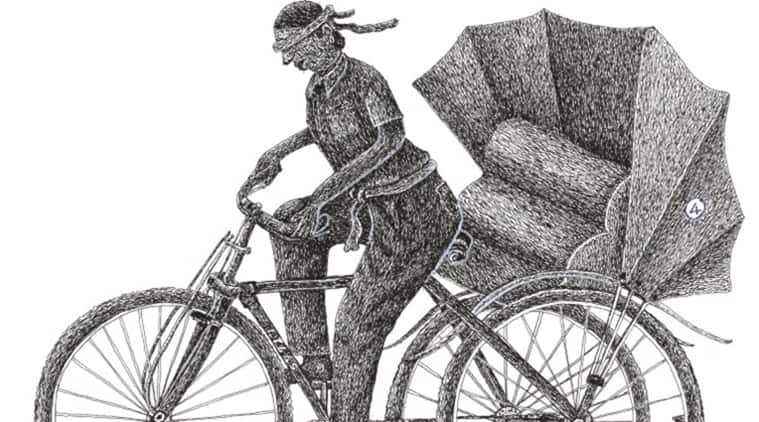 Artists have modified the Gond art form in their own way. For instance, they use dots and small dash to create forms. (Source: IANS)

A noted artist of the genre, according to Venkat Raman Singh Shyam, stylistically, today’s Gond art of a vast swathe of central India is not a mere tradition but has a very new and contemporary element attached to it.

“Today’s Gond art is not traditional; rather it is very new and contemporary,” the artist, whose visual chronicle, “Finding My Way” (Navayana, limited edition, Rs 10,000), comprises 170 sketches juxtaposed with the author S Anand’s text, told IANS.

“These days, artists have modified the art form in their own way. For instance, my uncle, Jangarh Singh Shyam uses dots (to create forms), I use the small dash. Other artists have their own patterns and designs,” Shyam, 46, explained.

“I can’t deny that even in 2000 BC, similar work existed in the the cave paintings including themes of environment, animals, their life etc., but what we are doing today is different and artists have different mannerisms of pursuing the art form.”

Before becoming a professional artist, Shyam took up several jobs to earn his livelihood. Circumstances had also forced him to ply a cycle rickshaw in Delhi.”It was the life of slavery that awaited me in Delhi”, said he. His autobiography vividly portrays his journey.

“I left the book of Karma behind but the rhythm of life isn’t hard to find. I began to ply a cycle rickshaw. The pinwheel responds to the call of the breeze, the rickshaw wheel to the strength of my feet”.

In addition, the most intriguing use of Gond art in the book is in the chapters with references to mythology.

“Forest is framed again through the eyes of Eklavya’s bow, from his bow springs a song, he shoots music, not arrows.”

“Sita can’t figure the riddle out and she asks her wise palace maid who tells her to accept Laxman’s challenge.”

The above mentioned two scenes, and many more mythological tales, have been excitingly juxtaposed with Shyam’s art that keeps readers glued to the book.

According to Shyam, Gond art hasn’t escaped the eye of art connoisseurs but is still undervalued.

“Sometimes, I feel Gond art is undervalued. People are finding, promoting and encouraging it but they are not giving it the kind of value it deserves,” he said.

“People always questioned my work saying that it didn’t seem tribal. They even said, that ‘your paintings are different from tribal art’. At that time, I got the idea how the story and culture of my society should be conveyed. It would have to be the book from which people can read and learn basic ideas about me, tribals and Gond paintings,” Shyam said.

“We had about more than 150 sketches. Anand and I realised that everything cannot be put together. Lots of pictures were there so we divided the book into five themes. This is an enjoyable book,,” the artist explained.

What is interesting is how the artist and the writer describe Shyam’s different experiences and episodes.

For instance, the book says of the Bhopal gas tragedy: “chemicals meant to kill insects had killed the humans who had concocted them”.

However, there is a predominance of black in Shyam’s work and he justified it thus: “Black is the mother of all colours. It is a powerful colour because if we blend a few colours, the mixture turns out to be black. It was the colour I began with as I used to paint walls with charcoal during my childhood.”

“Later, I realised that black and white are very friendly as a combination because black on white and vice versa is very properly visible. They celebrate each other,” he said.