100 years of Jallianwala Bagh Massacre: The night of the dead

The mayhem unleashed by the British troops on the unarmed civilians during a peaceful gathering at Jallianwala Bagh on April 13, 1919 remains a defining moment in the history of the Indian struggle for independence. Two Sikh historians compile accounts by 40 eyewitnesses, who lived to tell the tale. Locals show the bullet-holes in the southern wall of the Jallianwala Bagh towards the western side. (Source: Amandeep Singh Madra)

A woman who spent the longest night of her life sitting and crying besides the body of her husband as hundreds others bloodied bodies lay scattered around her; a father who struggled to find the body of his 13-year-old son who had gone out to play with friends but was shot in the head; another man who saw a 12-year-old boy lying dead still holding tightly a 3-year old boy, probably his younger brother, in his arms; and a British missionary who was so shaken by what he saw that he felt like “taking each Englishman to the site” and show them the mayhem that the British troops led by Brigadier General Reginald Dyer had unleashed at the Jallianwala Bagh on April 13, 1919.

These are among 40 testimonies of witnesses to the massacre and the preceding riots in Amritsar that form the base of a new book, “Eyewitness At Amritsar – A Visual History of 1919 Jallianwala Bagh Massacre”, that two London-based Sikh historians are set to bring out.

The 244-page book by Amandeep Singh Madra and Parmjit Singh, to be released on the 100th anniversary of the massacre, also contains 80 photographs that are being published for the first time. 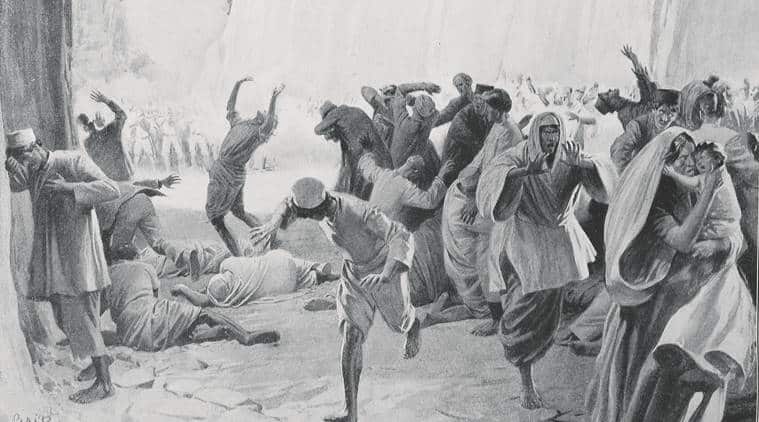 The photographs and accounts have been sourced from archives of Hunter Commission (formed by the British to enquire into the massacre). (Source: Amandeep Singh Madra)

The compilation of the accounts by the eyewitnesses – who are now dead but whose statements were recorded after the incident – and images is significant because even after a century, the government does not have the complete details of the victims, their next generation or other survivors.

Speaking to The Indian Express over phone from London, Madra said that the first-hand accounts and images have been compiled from several sources which “weren’t in the public domain”.

“There are at least 40 such accounts of eyewitnesses – people who lost someone from their families or survivors who saw the massacre – which are being published for the first time. These people were in or around the Bagh when British troops led by Dyer opened fire at the peaceful, unarmed gathering,” Madra said. “Some were in Amritsar city and saw what was happening since April 10. There were massive protests against British atrocities followed by riots in which some Britishers were killed too. The British atrocities then grew manifold and Indians were even made to crawl on roads to humiliate them. We cannot see Jallianwala Bagh as an isolated event. The anger against British was brewing in hearts of Indians. Though the people had convened in Bagh for a peaceful protest, the British saw in it a 1857-rebellion like situation. To suppress it, they unleashed mayhem and killed innocents,” Madra said.

He said the “book is unique as it is a visual journey through the massacre” with rare and unseen photos and accounts.

The photographs and accounts have been sourced from archives of Hunter Commission (formed by the British to enquire into the massacre), INC Commission (formed by the Indian National Congress leaders), private collections of the British and Indian families who lived in Amritsar, documents available in UK libraries, and even images that were “smuggled out of India to UK”, the historian said.

“None of the survivors or the witnesses whom we have quoted in book are now alive. We have sourced their statements, which they gave to the INC Commission or Hunter Commission. A debate on Jallianwala was held at the House of Lords. The British had locked down the Bagh, in fact the entire Amritsar city, after firing so that no one could come and see the horrifying aftermath of what they had done. It was after months that INC leaders such as Motilal Nehru and Jawahar Lal Nehru were able to reach there and take some photographs. Some matters is also sourced from descendants of a British soldier who was then posted in Amritsar and took photos,” says Madra. 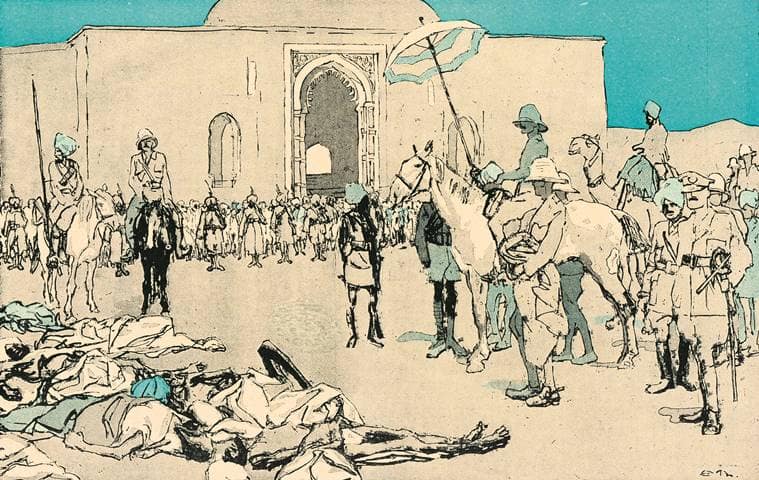 The book, among others, also quotes Rabindranath Tagore on the massacre. (Source: Amandeep Singh Madra)

The book also includes testimony of Dyer. “He showed no remorse or sympathy for what he did. He defended it as a ‘necessary police action’,” says Madra. “The cover image of the book is of the narrow entrance that Dyer too to storm into the Bagh,” he added.

The book also has contributions from Kim A Wagner, author of “Amritsar 1919: An Empire of Fear and Making of the Massacre”. The image search was assisted by Jasdeep Singh, community curator at National Army Museum in London.

The book, among others, also quotes Rabindranath Tagore on the massacre. “The result of the debates in both Houses of Parliament (UK) makes painfully evident the attitude of mind of the ruling classes of this country towards India. It shows that no outrage, however monstrous, committed against us by agents of their government, can arouse feeling of indignation in the hearts of those from (amongst) whom our Governors are chosen. The unashamed condonation of brutality expressed in their speeches and echoed in their newspapers is ugly in its frightfulness,” the Kabiguru had said. Mahatma Gandhi had said, “No doubt the shooting was “frightful”, the loss of innocent life deplorable. But the slow torture, degradation and emasculation that followed was much worse, more calculated, malicious and soul-killing, and the actors who performed the deeds deserve greater condemnation than General Dyer for the Jallianwala Bagh massacre. The latter merely destroyed a few bodies but the others tried to kill the soul of a nation”. 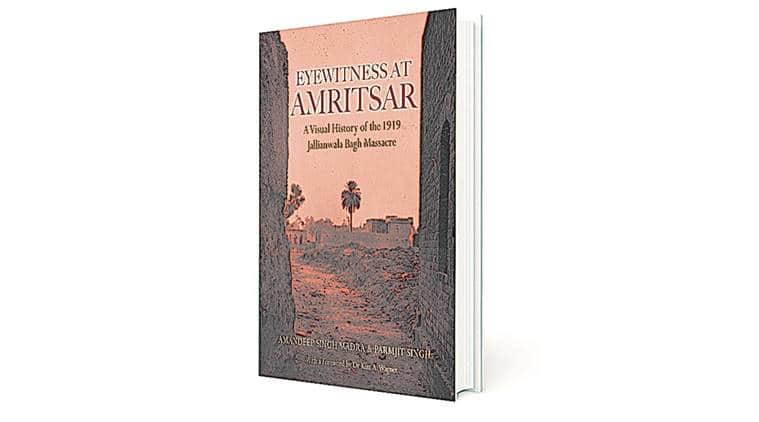 The images in the book include the photograph of 13-year old victim Madan Mohan; some images of local residents showing and inspecting bullet-holes in southern wall; a visual representation of the massacre created by artist Eduard Thöny for the German satirical magazine Simplicissimus in January 1920 – believed to be the first such artistic representation – and a German depiction of the massacre from 1939 under the headline “One of the many disgraces of British colonial history: the bloodbath of Amritsar” – all of them sourced from private collections.

IN WORDS OF THOSE WHO SAW IT

(Excerpts from the book provided to The Indian Express) 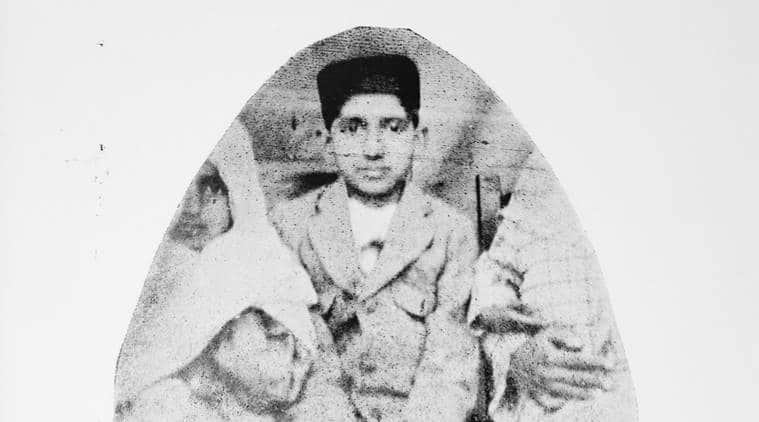 Madan Mohan (13), one of the victims who was shot in head. His father Dr Mani Ram recorded his witness. (Source: Amandeep Singh Madra)

“Jallianwala Bagh is at a distance of about three minutes’ walk and is the only open place near my house. My son, Madan Mohan, aged about 13 years, along with his playmates used to visit this open square for play almost daily. On the 13th April, 1919 he went there as usual and met his tragic end, having been shot in the head which fractured his skull, he bled and died instantaneously. I. with eight or nine others, had to search for about half an hour till I could pick up his corpse as it was mixed up with hundreds of dead bodies lying in heaps there, who met their respective ends under circumstances well known. This is how my innocent child of innocent age was murdered by those who allege they acted in the name of justice, law and order”.

Ratan Devi, who spent entire night by her husband’s body:

“After passing through that heap, I found the dead body of my husband. The way towards it was full of blood and dead bodies…By this time, it was 8 o’clock and no one could stir out of his house, because of the curfew order. I stood waiting and crying, seated by the side of my dead husband. I could not go anywhere leaving the body of my husband. I saw other people at the Bagh in search of their relatives. I passed my whole night there. It is impossible for me to describe what I felt. Heaps of dead bodies lay there, some on their backs and some with their faces upturned. A number of them were poor innocent children. I shall never forget the sight. I was all alone the whole night in that solitary jungle. Nothing but the barking of dogs, or the braying of donkeys was audible. Amidst hundreds of corpses, I passed my night, crying and watching. I cannot say more. What I experienced that night is known to me and to God”.

“I could not sleep or eat or even speak to anyone after what I saw. I wanted to go away, and be alone… It was a massacre, a butchery… I feel that if only I could take each single Englishman and show him out of my eyes what I have seen, he would feel the same as I”.

Girdhari Lal who saw massacre from a nearby rooftop:

‘The worst part of the whole thing was that the firing was directed towards the gates through which the people were running out. There were small outlets, four or five in all, and bullets actually rained over the people at all these gates. Shots were fired into the thick of the meeting. There was not a corner left of the garden facing the firing line, where people did not die in large numbers. Many got trampled under the feet of the rushing crowds and thus lost their lives. Blood was pouring in profusion. Even those who lay flat on the ground were shot, as I saw the Gurkhas kneel down and fire.’

Lala Guranditta who was shot twice in leg:

“After the soldiers had left, I looked round. There must have been more than a thousand corpses there. The whole place was strewn with them. At some places, seven or eight corpses were piled, one over another. In addition to the dead, there must have been about a thousand wounded persons lying there. Close by where I was lying, I saw a young boy, aged about 12 years, lying dead with a child of about 3 years clasped in his arms, also dead”.