Once Upon a Time in Bombay

Mahatma Gandhi with Sardar Patel and others at Birla House, Bombay;

A year into the Non-Cooperation Movement, Mahatma Gandhi announced the Tilak Swaraj Fund. The Fund, a homage to Bal Gangadhar Tilak on his first death anniversary, aimed at collecting Rs 1 crore to aid India’s freedom struggle and resistance to the British rule. A massive amount at the time, the skeptical were proved wrong when the money came in by the set deadline of June 30. Of the collected amount, Rs 37.5 lakh was donated by Bombay, which led him to refer to the city as “Bombay the Beautiful”.

The use of the expression surprised Mumbai’s Mani Bhavan Gandhi Sanghralaya President Usha Thakkar when she came across the reference during one of her researches. “He believed that rural India was the heart of the nation and often called cities ‘India’s plague ports’. I was curious as to what led him to call Bombay beautiful,” she recounts. The search led her to discover a plethora of lesser-known stories about the role Mumbai (then Bombay) played in the Mahatma’s journey and India’s freedom struggle.

These are now part of a book Thakkar, along with her colleague and researcher Sandhya Mehta, has penned on Gandhi’s relationship with Bombay. Titled Gandhi in Bombay, the book, published by Oxford University Press, released on January 9. “Around 1931, when Gandhi was in jail for the Salt Satyagraha, Bombay came to be the ‘keep of Gandhism’. This was acknowledged by many, including the Governor at the time. Yet, the city’s role in the freedom struggle is often not recognised enough. This book aims to remind people of it,” says Thakkar.

The book, say Thakkar and Mehta, is the culmination of a five-year research that took them to various archives, libraries and a Mumbai of yore. “The roles of Mani Bhavan, Birla House, Chowpatty and Gowalia Tank in the freedom struggle are well chronicled. However, there were numerous other, more important places that few people know of. Most of those don’t even exist today,” points out Mehta, citing the example of Seth Morarji Gokuldas Hall that stood near Gaiwadi in Kalbadevi and China Baug.

In the book, Kalbadevi and Girgaum feature repeatedly, point out the authors, for two reasons — they constituted the heart of Bombay at that time; and they were the traders’ hub. “Gandhi had two messages for people, of protesting against the British rule and of adopting ‘swadeshi’. These had to go hand in hand. The cloth traders were an important community to be tapped for that,” explains Thakkar.

Gandhi’s unconventional leadership held an appeal for everyone, including women. “It was uncommon for women to be part of such movements at that time. Many would be hauled and arrested, lathicharged, but they came in huge numbers,” says Mehta.

In a city that has a history of being partial towards the Left, Gandhi made an impression. However, Thakkar admits that despite attempts, he could not reach out much to the mill workers, who formed a large part of the city’s working class. “But there were followers. For

instance, mill worker Babu Genu Said protested against the foreign cloth. In December 1930, he stood in front of a truck carrying the material, refusing to let it pass. The British officer in-charge crushed him under the wheels. This resulted in protests and strikes,” explains Thakkar, adding that a road in Kalbadevi is named after him.

Even the glamour world of films was not immune to Gandhi’s appeal. The Hollywood films playing at Rialto (then located at Lamington Road) and Capitol Cinema at Victoria Terminus would show a documentary short on Gandhi before the screenings. “The documentaries were advertised more than the Hollywood show,” says Mehta.

In order to keep the narrative simple, Thakkar and Mehta divided the chapters according to the chronology of events. Thakkar says, “Bombay is where Gandhi landed upon his return from South Africa. It’s here he started his practise as a barrister and failed. He chose this city to launch the first nation-wide satyagraha in 1912 and also the Quit India Movement in1942. At the Town Hall, now Asiatic Library, part of his ashes were kept so people could pay their last respects. The city and the Mahatma have been inseparable.” 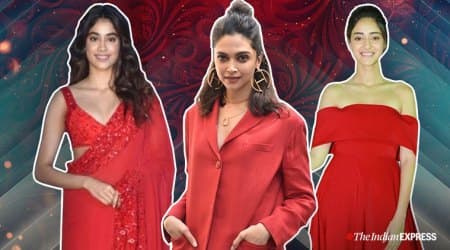 Pretty in red: When Bollywood aced the bright hue