2018 Man Booker Prize shortlist out: All you need to know about the six novels

This year, Daisy Johnson, 27, is one of the youngest in the running for the Man Booker Prize. The others include Anna Burns, Esi Edugyan, Rachel Kushner, Richard Powers, and Robin Robertson. 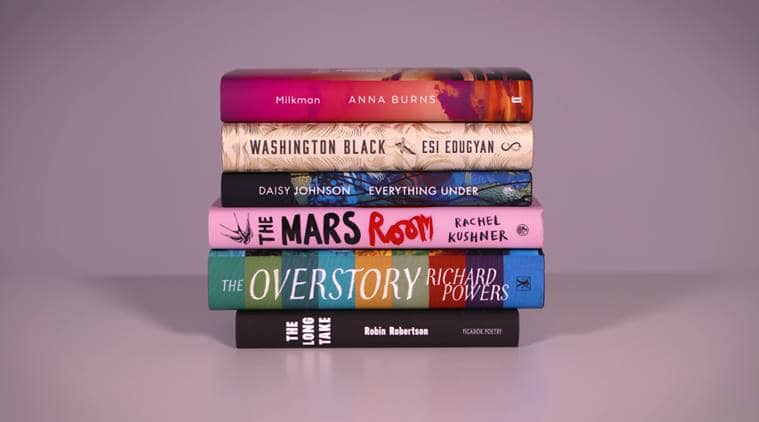 If you are looking for a good book to cosy up with, then look no more. (Source: TheManBookerPrize)

The shortlist for the 2018 Man Booker Prize has been revealed today and Anna Burns’ Milkman, Esi Edugyan’s Washington Black, Daisy Johnson’s Everything Under, Rachel Kushner’s The Mars Room, Richard Powers’ The Overstory, and Robin Robertson’s The Long Take made the cut.

Among the six shortlisted, three of them – Burns, Johnson, and Robertson are from the UK, whereas two, Kushner and Powers, are from America. Edugyan is a Canadian author.

Here’s why you should read these six novels:

Everything Under by Daisy Johnson

At 27, the youngest ever shortlisted author has gone from her day job as a bookseller to being a celebrated literary success.

Her book talks about Gretel, a child, who lived on a canal boat with her mother, and together they invented a language that was just their own. She hasn’t seen her mother since the age of sixteen, though and those memories have faded now. Gretel who works as a lexicographer, updating dictionary entries, begins to remember the private vocabulary of her childhood. Along with it, she remembers other things, too: the wild years spent on the river; the strange, lonely boy who came to stay on the boat one winter; and the creature in the water. In the end, there will be nothing for Gretel to do but go back. This is a novel by the youngest ever shortlisted author. (Source: Penguin)

The Mars Room by Rachel Kushner

The American novelist went behind bars in US prisons to research her tale of a former lap dancer serving a life sentence. In the book, she brings the character of Romy Hall to life who is at the start of two consecutive life sentences, plus six years, at Stanville Women’s Correctional Facility. The Mars Room presents not just a bold and unsentimental panorama of life on the margins of contemporary America, but an excoriating attack on the prison-industrial complex. The Overstory by Richard Powers

Set in the forests of the Pacific Northwest, Powers’ novel is inspired by his own rural home on the North Carolina-Tennessee border. In the book, nine strangers, each in different ways, get summoned by trees and are brought together in the last stand to save the continent’s few remaining acres of virgin forest. This novel by Richard Powers features on the shortlist of MBP 2018. (Source: RichardPowers.net)

The Canadian writer lost out to Julian Barnes in 2011. Her new novel, about a child slave, is based on a true story. From the brutal cane plantations of Barbados to the icy wastes of the Canadian Arctic, from the mud-filled streets of London to the eerie deserts of Morocco, Washington Black is the tale of a world destroyed and the search to make it whole again. It is a tale of a world destroyed and the search to find it again. (Source: PenguinRandomHouse)

The Long Take by Robin Robertson

London-based poet Robertson is the first to be shortlisted for the Booker with a verse novel. It follows a D-Day veteran, Walker, who suffers from post-traumatic stress disorder; and looks instead to the city for freedom, anonymity, and repair. As he moves from New York to Los Angeles and San Francisco, we witness a crucial period of fracture in American history, one that also allowed film noir to flourish. It is the first verse novel to be shortlisted for a Booker Prize. (Source: PanMacMillan)

This novel shows the protagonist as busy attempting to keep her mother from discovering her potential boyfriend and keeping everyone in the dark about her encounter with Milkman. But when her brother-in-law sniffs out trouble, and rumours start to swell, it starts getting interesting and dangerous for her. A tale of gossip and hearsay, silence and deliberate deafness, it is the story of inaction with enormous consequences. It is a tale of gossip and hearsay. (Source: Amazon)

So which one would you like to pick up for a read?