Top orchestras have no female conductors. Is change coming?

Now a group of women could be on the cusp of breaking barriers in one of music’s most stubbornly homogeneous spheres: the male-dominated world of orchestral conducting. For years, they have worked their way to the top of the classical music industry. They have confronted stereotypes that they are too weak to lead. They have shared advice about how to deal with sexist comments and even how to dress.

Now a group of women could be on the cusp of breaking barriers in one of music’s most stubbornly homogeneous spheres: the male-dominated world of orchestral conducting.

In the history of American orchestras, only one woman has risen to lead a top-tier ensemble: Marin Alsop, whose tenure as music director of the Baltimore Symphony Orchestra ended last month. Her departure has ushered in an unsettling era for the country’s musical landscape. Among the 25 largest ensembles, there are now no women serving as music directors.

Alsop, 64, said in an interview that she was surprised the statistics remain “so shockingly brutal.” When she assumed the top spot in Baltimore in 2007, she expected more women would soon be appointed at other orchestras.

They never were. Instead, she said, she met resistance when she tried to bring in more women as guest conductors.

Alsop said she feels the current moment could be different, since the #MeToo movement and a broad reckoning over severe gender and racial disparities in classical music are putting pressure on arts leaders.

“I hope that we’re past the tipping point,” she said. “It feels that way. But I’ve been naïve in believing that before.”

For women in conducting, there are reasons to be optimistic. Administrators at major ensembles in cities like Atlanta, Minneapolis and Cincinnati, as well as Baltimore, are vowing to ensure that women are serious contenders.

Search committees are looking at a mix of established artists and rising stars, according to interviews with 20 committee members, administrators, players and conductors. 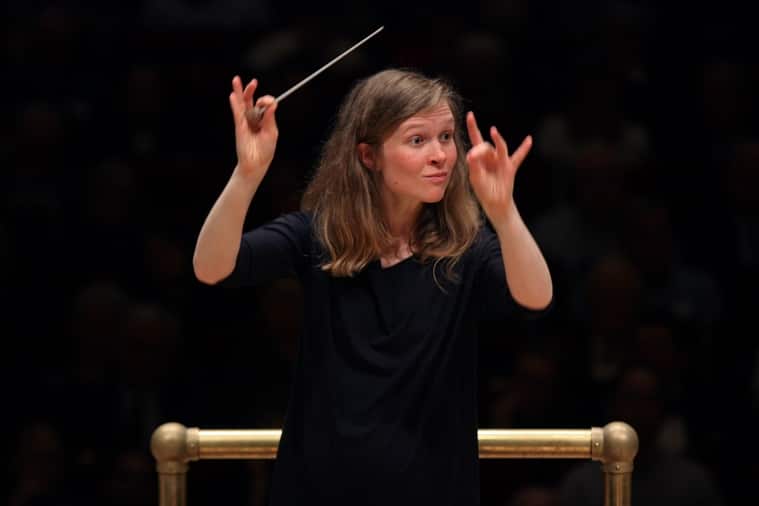 Among the most frequently mentioned names are Susanna Malkki, 52, the chief conductor of the Helsinki Philharmonic Orchestra, and Mirga Grazinyte-Tyla, 35, who leads the City of Birmingham Symphony Orchestra in Britain.

Mark Volpe, the former president and chief executive of the Boston Symphony Orchestra, said that while “progress has been painfully slow,” orchestras were likely to appoint more women over the next several years.

“People respond to pressure,” he said. “There is heightened awareness of the imperative to be more inclusive.”

Women are winning plum jobs as assistant and guest conductors, typically steppingstones to prestigious posts. Eun Sun Kim has just begun her tenure at the San Francisco Opera, becoming the first woman to serve as music director of a major American opera house.

“You’re going to see an acceleration,” said Deborah Borda, the New York Philharmonic’s president and chief executive, who also serves as chairwoman of the jury at La Maestra, an international conducting competition for women. “The foot is on the gas.”

The German conductor Ruth Reinhardt, 33, a former assistant conductor of the Dallas Symphony Orchestra, said, “My generation is maybe the first one who got equal opportunities to develop and grow.”

Openings loom: Roughly a third of the music directors at the top 25 largest orchestras in the United States are planning to step down over the next several years. That includes veterans like Louis Langrée, 60, at the Cincinnati Symphony Orchestra and Robert Spano, 60, at the Atlanta Symphony Orchestra. The contract of Riccardo Muti, 80, at the Chicago Symphony Orchestra ends in 2022. Baltimore’s podium is currently empty, and at the Minnesota Orchestra, Osmo Vanska, 68, is stepping down after the coming season. There are current or coming openings in Indianapolis, Kansas City and Salt Lake City.

But some women describe an uphill battle. They continue to face stereotypes that only men can serve as maestros. They also grapple with the perception that they do not have enough experience to lead elite ensembles. This can lead to a paradox: While top orchestras demand their conductors be seasoned, particularly if they’re going to appear on prestigious subscription series, it is hard to get that experience if you do not already have it.

Jeri Lynne Johnson, the founder and artistic director of the Black Pearl Chamber Orchestra in Philadelphia, said that earlier in her career orchestras turned her down for conducting positions because they said she was not what audiences expected a music director to look like.

Johnson, who is Black, said she felt ensembles seemed more willing to take chances on young men than young women. While the average age of music directors skews older, American orchestras have shown a willingness to hire charismatic young men, such as Gustavo Dudamel, who was named to lead the Los Angeles Philharmonic in 2007, when he was 26. Yannick Nézet-Séguin was 35 when he was hired by the Philadelphia Orchestra in 2010; Andris Nelsons, 34 when he was named music director of the Boston Symphony Orchestra in 2013.

“Female leadership is more necessary now than it ever was,” Johnson said. “We need to allow the insight and perspective of someone who has been kept out of the halls of power, to create more inroads for other people.”

Across 174 American ensembles of all sizes, about 9% of music directors were women in 2016, the last year for which data is available, according to the League of American Orchestras. Experts say a lack of role models has contributed to gender disparities in conducting. Orchestras also have historically given women fewer opportunities to lead ensembles as guests, making it difficult for them to practice and to build relationships with administrators and players.

The talent pool has widened in recent years. Competitions, master classes and fellowships geared toward women have become more popular. Veteran conductors like Alsop and JoAnn Falletta, the music director of the Buffalo Philharmonic Orchestra in New York since 1999, have started programs to mentor rising artists.

Falletta, 67, said she helps women navigate a variety of issues, including what to wear while conducting and how to build trust with boards of directors dominated by men.

“You have to find your own authority,” she said. “You don’t have to imitate anyone. You don’t have to be like a Toscanini. That actually doesn’t work anymore, to be a conductor with totalitarian power.”

Orchestra leaders say they are working to include more women and people of color on hiring committees — a critical step, they say, in ensuring that female candidates are fairly considered.

Jonathan Martin, the president of the Cincinnati Symphony, said he believed systemic discrimination in orchestras had kept women from attaining music director posts for decades. He said he rejected the idea that women have only in recent years gained enough experience to be considered for positions at large ensembles.

A lack of diversity among board members has contributed to the dearth of female conductors, many say. Across the industry, boards are about 58% male and 92% white, according to the League of American Orchestras. Jeannette Sorrell started her own ensemble, Apollo’s Fire, a Baroque orchestra based in Cleveland, in part, she said, because she encountered bias while trying to navigate a traditional career. She said a lack of diversity on boards is a major obstacle.

“A lot of orchestras are still led by boards of directors who see their role as the guardians of tradition,” said Sorrell, 56. “That is a very important role for a board, but it’s not the only role.”

Orchestras, hoping to expand the pool of experienced, viable candidates for when vacancies arise, have made an effort in recent years to appoint more women as assistant conductors and guests.

At the Los Angeles Philharmonic, leaders say change will come only when women are allowed to build long-term relationships with orchestras. Of 40 young conductors who have participated in the Philharmonic’s conductor fellowship program since 2009, about a quarter have been women.

“Conducting doesn’t happen overnight,” said Chad Smith, the Philharmonic’s chief executive. “There’s a lag time here, which is something we’re all struggling with.”

Malkki, who serves as the Philharmonic’s principal guest conductor, said orchestras sometimes focused too much on hiring charismatic figures instead of those with solid technical abilities.

“Some artists are just put aside because they are not glamorous enough,” she said. “There is talent, and if we give the dedicated people opportunities, then these people will also grow into greater artists.”

While search committees at many orchestras are just beginning to convene — Cincinnati announced the members of its panel on Sept. 2 — the wish list for some includes stars like Malkki and Grazinyte-Tyla.

Other frequently mentioned names include respected artists like Sorrell; Barbara Hannigan, 50, a Canadian soprano and conductor; Anna Skryleva, 46, a Russian who leads the Theater Magdeburg in Germany; Debora Waldman, 44, the director of the Orchestre National Avignon-Provence in France; the Australian conductor Simone Young, 60; and Xian Zhang, the music director of the New Jersey Symphony Orchestra.

While it may take several years for widespread change to come, some women say they are already noticing a shift. They are getting more invitations to appear with top orchestras, and they say their fan bases are widening.

Speranza Scappucci, 48, an Italian conductor who is rising in the opera world, said ensembles should move swiftly.

‘Must do more’: Sidhu writes to CM Amarinder highlighting 32 demands by protesting farmers