The show must go on; ‘Macbeth’ opens La Scala opera season despite Covid

Though "Macbeth" is set in the 11th century, director Davide Livermore staged the opera in a modern city, using augmented reality. People attend the re-opening of La Scala opera house after it was closed due to the coronavirus disease (COVID-19) pandemic, in Milan. (REUTERS/Flavio Lo Scalzo/File Photo)

Giuseppe Verdi’s “Macbeth” kicked off La Scala’s opera season before hundreds of spectators on Tuesday just as the fourth wave of the coronavirus pandemic is again forcing many theaters elsewhere in Europe to shut their doors.

While Italy’s cinemas and theatres reopened to the public in late April, the government on Monday again restricted access to an array of venues, including theatres, for the unvaccinated. 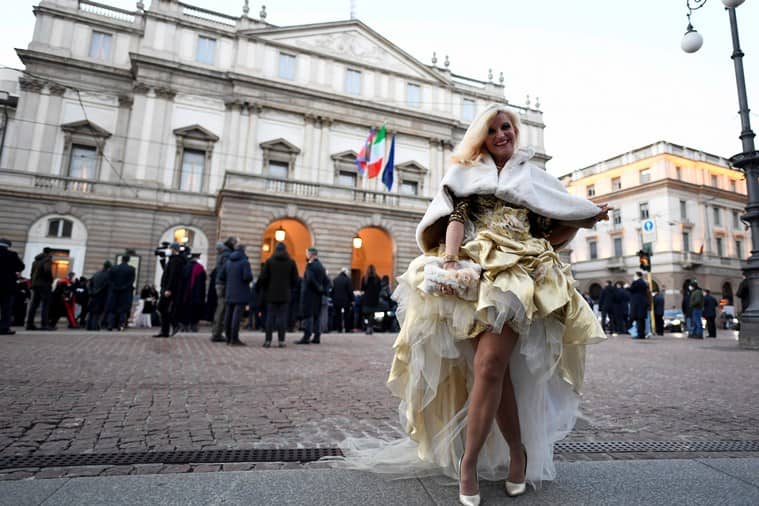 A guest poses in front of the theatre before the opening night of the La Scala opera house. (REUTERS/Flavio Lo Scalzo)

“When you see so many great theatres closed, like the Vienna State Opera, those in Munich, Dresden and Leipzig, I have to say we are lucky… This year’s season opening is a sort of miracle,” said La Scala’s artistic director Dominique Meyer.

The audience and orchestra members wore masks, while the actors and choir performed standing at a distance, but the gala dinner that usually followed the performance was cancelled.

This year opener “is a symbol of a restart for Italy as a whole,” said James Bradburne, general director of Milan’s Brera art gallery.

The opera, based on William Shakespeare’s tragic play, tells the story of a Scottish general who, goaded on by his power-hungry wife, murders the king and takes the throne. Though “Macbeth” is set in the 11th century, director Davide Livermore staged the opera in a modern city, using augmented reality.

The opera won a 12-minute ovation and a stage strewn with flowers, with a few boos for the contemporary interpretation.

The opera will run ‪until December 29.