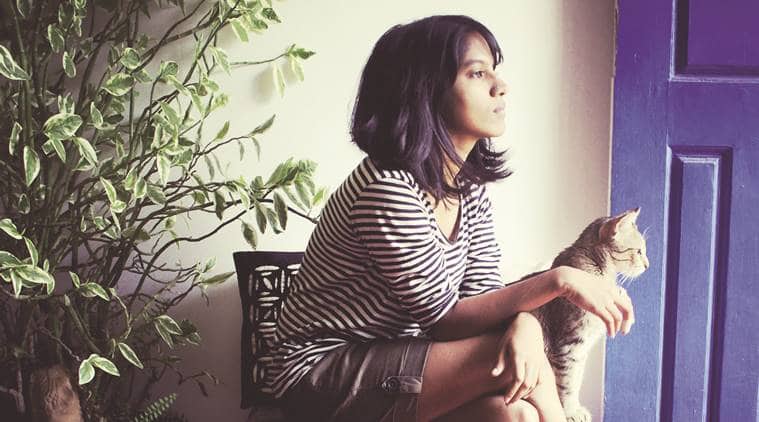 After Spending time with Sonali Zohra’s portraits of fantasy, one finds that her drawings come from everything she is surrounded by. Thick shrubbery, large, leafy bushes, deep and brooding trees, and species of birds and small animals. In fact, it is not fantasy at all, it’s nature, and we wonder when did nature recede from our natural world and become a part of something fantastic? Her work is a reflection of this sentiment, everything she touches turns to green and blue, and golden yellow. Every drawing is an invitation back to nature.

Zohra’s work willingly adapts to suit a print for your wall or an album cover for musician Donn Bhat’s latest, Connected. The album cover shows a man but his muscle and tissue has been replaced by nuts and bolts, hypnotised by the glare of his phone. It is the bleak image of progress, which is in stark contrast to the work she has done for the indie company B.E Hemp that has found industrial use for the grossly underutilised hemp plant, here Zohra uses motifs from nature — a hare, a snake, a snail, and a bird come together in a lush foliage of hemp. But the most recent are the illustrations she did for Arshia Sattar’s Ramayana for Children published by Juggernaut. “I had only read the Ramayana by Amar Chitra Katha and after reading Arshia Sattar, I found that there are a lot of details and stories that I did not know, in that respect Sattar’s book is unlike any other.”

In the pages for the Ramayana for Children, Zohra’s drawing is unencumbered and creates scenes that sweep. In one of the most captivating pages, Hanuman, drawn in the image and likeness of the grey langur, fittingly, also known as the Hanuman langur, sits on a perch with his flaming tail encircled around a blazing Lanka, the drawing emphasises Hanuman’s strength and quietude without causing a break in the image or thought process. “Working on this book has helped me unlock a new style of drawing. I incorporated all the different ways I draw into one and created something new.” One that Zohra, who trained as an artist at Chitrakala Parishath, Bengaluru, decides is not necessarily for children.

The artist, 26, has been drawing ever since she could hold a crayon and was exposed to art and literature very early in life. She says, “As a child, I read The Mahabharata by Shanta Rameshwar Rao, who was my principal in Vidyaranya, Hyderabad. The book was illustrated by the late Badri Narayan, who is also an artist from Hyderabad. I was hugely influenced by this book and had that as a reference. It was relatable. They were just illustrations — in the folky style of Badri Narayan. These days illustrations for children’s books are very stylised, they think that all that fluffy cute stuff is childlike.”

Growing as an only child, Zohra’s books became her life, “I still have the books I read as a child. I really like all the Roald Dahl books and I love Quentin Blake’s whacky illustrations, you can tell his personality just from his art. My mum always found well-illustrated books for me. More recently, I really like the work Tara Books is doing, using indigenous Indian art to tell indigenous stories. Pratham Books too, have understood the science behind storytelling for children.”

Zohra works under the name Dangercat, inspired by the cat she rescued and adopted while she lived and worked out of her studio in the city. However, the city made no sense, it was lonely, there was no garden, and the pet who would bring her calm and company turned out to be a psychotic, dangerous cat. Zohra eventually moved out of the city with her dangerous cat and everything made sense again. “For me, the abundance of nature feels more real than anything else and most of my drawings are inspired from there. It doesn’t feel like fantasy, I think that the earth and nature is pretty much as good as it gets. It just feels right to me, I’m not interested in cities or human behaviour, I’m keen on the relationship between man and nature. For me, magic is a plant growing!”