Prado, known on social media as Diablo Praddo or Devil Praddo, changed his appearance by tattooing 80% of his body, reducing his nose size and removing one of his ring fingers to mimic a claw-like hand Brazilian tattoo artist Michel Faro Prado has taken body modification to a new level by transforming himself into a devil look-alike.

Prado, known on social media as Diablo Praddo or Devil Praddo, changed his appearance by tattooing 80% of his body, reducing his nose size and removing one of his ring fingers to mimic a claw-like hand. He also has sharpened fangs and implanted horns. “Turning into the devil wasn’t something I planned, it was not my idea,” said Prado. “The sinister attracted me.”

Once homeless and a drug addict, the 46-year-old tattoo artist said those tough years helped make him a better man who is constantly working towards self-knowledge. Despite his frightening image, Prado says he has a good heart. 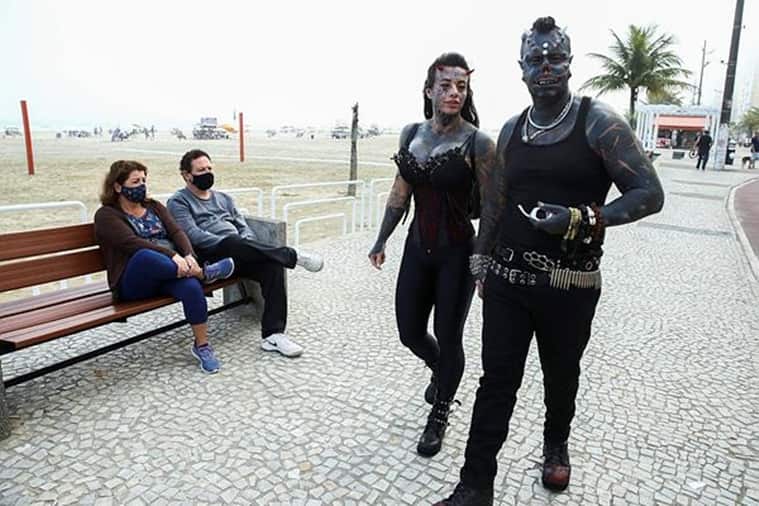 The artist couple walk at the beach as people watch. (Source: Reuters)

His wife Carol Prado, 36, who is known as Demon Woman, also altered her body to fit the image. The Sao Paulo-based couple have undergone their most extreme modifications during the last five years.

Subscriber Only Stories
View All
Joe Biden’s a great President. He should not run again
In this Bengal district, solid, plastic waste management now a people’s m...
Delhi Confidential | GOAT & the gift: PM Narendra Modi gets a Lionel ...
India looks at options to pay defence dues to Russia: stake sale, bonds, ...
Buy 2-year plan with SD20 code for special price
ALSO READ |Planning to get a tattoo? Things you should know before getting inked

Even though he has faced prejudice and hate, Prado has learned not to care what others think about him. “What I desire differs from society’s established patterns,” he said. “I receive so much love, so much love that it (prejudice) has become so small.”