Portrait of a dissident artist

With his new solo show in Delhi, artist NN Rimzon demonstrates why art cannot be separated from society and politics. 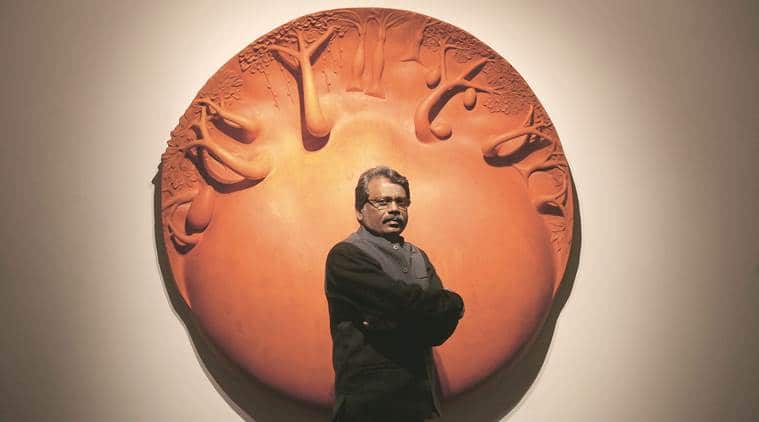 The year of his birth, 1957, was also the year that signified the coming to power of the first democratically elected Communist government in Kerala. His relationship with politics was to define the art of NN Rimzon. In his canvases, the red stood for the blood of the workers. It was also symbolic of the bloodshed of communal riots and the violence during the Emergency. Rimzon, 59, does not like being termed a political artist but he does not deny that politics has played a crucial role in his oeuvre. In his student days, his figures often reflected Leftist concerns — with some of his teachers at the Government College of Fine Arts, Thiruvananthapuram, directly involved in cultural agendas of left wing political parties. The political upheaval that accompanied Indira Gandhi’s Emergency during the mid-1970s, meanwhile, led him to drift from narrative painting to conceptual sculptures. “Much of my work might appear to be figurative but there is an underlying representation, whether I deal with spiritual, political or social concerns. I want them to have an ability to heal,” says the Thiruvananthapuram-based artist.

Rather reclusive, he returns to Delhi after more than 20 years with the solo ‘Forest of the Living Divine’ at Talwar Art Gallery, on till May 28th. Trademark Rimzon, it brings together traditional iconography and archetypes he often turns to: the primordial man, cosmic egg as a symbol of fertility and continuity of life, and the skull as a reminder that death is a part of life. “The imagery is not very difficult to understand, it is all related to things we see around us. The symbolism comes from our collective memory,” says the artist.

He refers to Forest at Night, a female nude with her hair jutting towards the sky, standing over an egg-shaped vessel made by joining two khumba-shaped vessels. “It is a closed vessel, a reflection of the inner mind, and also an abstract symbol of the womb and femininity,” notes Rimzon. Another work, The Death of an Author, has a crossed-legged man turning an earthen pot filled with red liquid over his head, making a direct reference to author Perumal Murugan, who, in January 2015, announced that he was giving up writing after he came under attack for his novel Madhorubhagan (One Part Woman).

Born in Kerala’s Kakkur village, Rimzon’s only exposure to art in his early years were commercial billboards in his neighbourhood. When he won a book featuring portraits by Vincent van Gogh during an art competition in school, his family belonging to an agricultural background, did not know much about the Dutch post-Impressionist painter. Encouragement from a relative who had seen his drawings led Rimzon to chart a journey to art college in Thiruvananthapuram in 1976. Part of its first batch of students to receive a Bachelor’s degree in arts, Rimzon was introduced to the avant-garde art movements of the ’50s and ’60s that were documented in the Studio International magazine gifted by the British Council to the college library. “That led to a major breakthrough in perception. We became familiar with terms such as abstract expressionism, pop art, Andy Warhol and so on,” he says. A comment made by Bhupen Khakhar during a visit to the campus led to further introspection. “He said we drew well but did not know what to draw, emphasising on the need for insight and emotion,” recalls Rimzon.

Soon, he was at MS University, Baroda, to pursue post-graduation from an institution that he had admired for producing artists such as Vivan Sundaram, Ghulam Mohammed Sheikh and Khakhar. “These artists were trying to move away from art that had preceded them, towards a more socially-oriented, people-oriented art,” says Rimzon. The subsequent years saw him experiment with concepts, producing works such as Man in a Chalk Circle, with a male nude in a circular boundary, ostracised.

Similar boundaries are addressed in the work, Dancer with Four Arms, at the ongoing exhibition. In stone, fibreglass, marble dust and aluminum, the installation has a faceless male figure standing behind a stone fence that has a sword tucked in. The semicircular shape, Rimzon says, refers to the stupa, a place for meditation. The fence is the boundary. “Walls are always used as a metaphor for separation.” He was also at the Royal College of Art, London, at a critical juncture, in the late ’80s, when new British sculptors like Anish Kapoor and Tony Cragg were making a mark. Success came in the form of exhibitions in museums and galleries across the world, including a solo at Gallerie School (FIA) Amsterdam, Netherlands, and group shows at Taipei Fine Arts Museum, Taiwan, and Queens Museum of Art, New York. He found many admirers, including MF Husain, who purchased one of his plaster works in the late ’80s.

By deciding to settle in Kerala in the late ’90s, after a six-year stint in Delhi, Rimzon chose to distance himself from the commercial centres of art in India. He returned to teach at his alma mater, and to the land where he had established his artistic roots — in its rural landscapes and village compounds, palm trees, temples and canoes. In his paintings the past permeates the present. The clear skies and starry nights of his homeland have been brought to Delhi too, painted on paper.