In Ghatotkach, Zunjarrao has experimented with physical theatre this time, coupled with songs, dance forms, and martial arts. 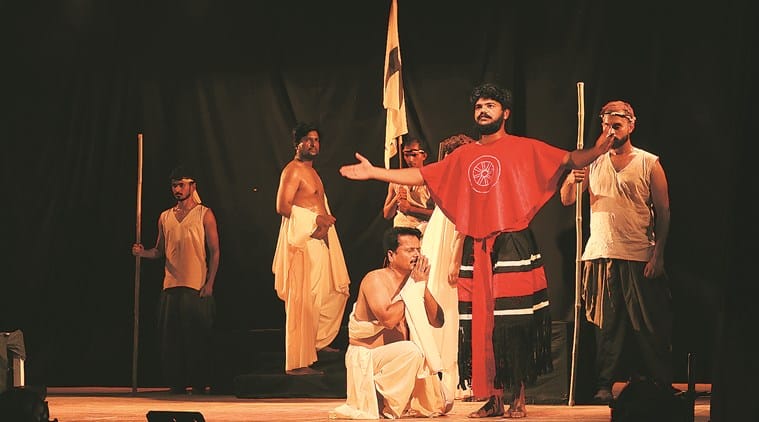 The protagonist of the play, Ghatotkach, has been used as a metaphor for soldiers and political party workers.

The story of Ghatotkach in the Mahabharata is one of obedience and sacrifice. Marathi theatre director Abhijeet Zunjarrao uses this character to present the realities of today’s politics in the eponymous play. In the two-hour-long Ghatotkach, the protagonist asks questions about why he was exploited for political gain.

Zunjarrao known for his plays such as Lejhim Khelnari Pora (a poetic drama on social issues from farmers’ deaths to molestation), Dozakh (on religious extremism), and Mele Undir (on how madness can tell the truth), and has been engaging audiences for years. A winner of numerous awards, including the Zee Natya Gaurav, Zunjarrao’s plays have been showcased at various theatre festivals across the country.

In Ghatotkach, Zunjarrao references various incidents from mythology, and the Mahabharata, to highlight today’s politics. The play was staged recently at Jyotshna Bhosale Sabhagruh in Pune as a part of MCC Rang Mahotsav.

While Zunjarrao set the play in the time of the Mahabharata, the dialogues have been written in a manner that would hint at contemporary politics. The music, the art direction, and the sound and light enhanced the impact of the play.

The protagonist of the play, Ghatotkach, has been used as a metaphor for soldiers and political party workers. “Both the Kauravas and the Pandavas were power-hungry and crossed all limits to achieve it, which is quite similar to contemporary politics. The Mahabharata happened because of a battle of egos. People of the state were forced to go to war. They were not invested in it,” says Zunjarrao. The play Ghatotkach presents various scenarios similar to how politicians don’t care about people, party workers, or ideology.

It includes other important characters such as Bhima, Dharma (Yudhistira), Hidimba, Arjuna, Duryodhana, Dushashana, Shakuni, and Karna. In a scene where Ghatotkach comes to help Dharma to plan war strategies, he is denied entry since he is from a lower caste. When Dharma realises that the war is tilting towards the Kauravas, he invites Ghatotkach in his palace for guidance. Ghatotkach dies in his fight against Karna. Finally, when Pandavas win the war, Dharma, during his public address, doesn’t even mention the sacrifice of Ghatotkach. This relates to how contemporary politicians forget party workers as soon as they win elections.

Zunjarrao remembers watching plays as a child because his father was part of an amateur theatre group in the Maharashtra State Electricity Board (MSEB). Though he was not particularly interested in theatre in his college days, his eureka moment came when he was selected for a one-and-half-year workshop by the National School of Drama at Nehru Centre, Mumbai. Late Jaydev Hattangadi, a noted theatre personality, showed him that theatre teaches us a way of life. Zunjarrao would later get a diploma in dramatic arts from Mumbai University.

In Ghatotkach, Zunjarrao has experimented with physical theatre this time, coupled with songs, dance forms, and martial arts. He wanted to give a modern touch to traditional Marathi theatre. There are nearly 30 actors in the play, all of whom use their bodies to speak, with minimal use of mechanical sound. “We practiced for almost three months before we came on a stage for the first time,” he says.

Zunjarrao is concerned that there are no serious efforts to save theatre as an artform. “It doesn’t mean that theatre groups will stop, as theatre has his own language. Theatre gives you a chance to recreate a single scene in multiple ways, which other platforms such as serials, movies, or web series can’t give you. That is why theatre, as a form, has its charm,” he says. When it comes to theatre’s impact on society, Zunjarrao believes that theatre can play a significant role in speaking about issues that society avoids talking about.

In the future, he has plans to stage his solo play Jagdamba, based on the life of Kasturba Gandhi, with Ghatotkach.