Madhubani art: Why painting is integral to women’s existence

#GenderAnd Culture: Rani Jha, a Madubhani art teacher, on how Madhubani art has been an ancient medium for women to explore freedom 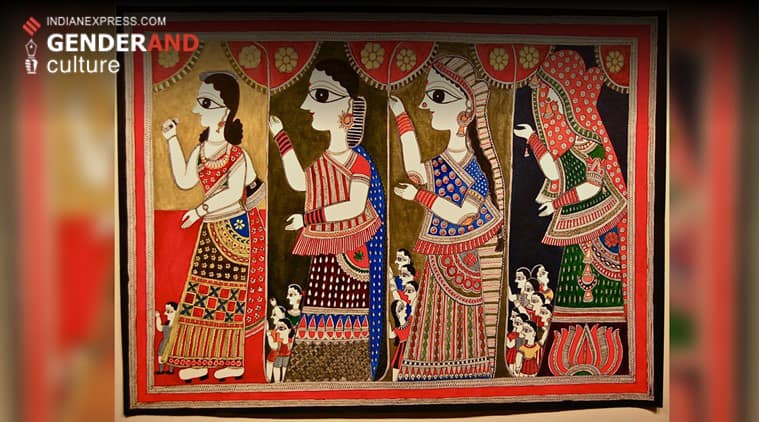 “For over a 1,500 years, women have lived oppressed lives, harboured suppressed desires. Unknowingly, women see themselves channelizing their repressed thoughts (of freedom) through the songs they sing and paintings they make for recreation,”says Rani Jha, the 54-year-old Master Painter and a teacher at Mithila Institute of Art in Madhubani, Bihar.

Rani Jha is a Madhubani painter. Madhubani art also known as Mithila painting is practiced in the Mithila region of Indian and Nepal. The art form dates back to the 7th century AD. Traditionally, the art form was passed on from generation to generation of women in the region. The painting was done with twigs, fingers, natural dyes and pigments. Most of the traditional art depicted natural objects like sun, moon and nature, deities from mythological epics, royal courts and weddings.

“‘How will you get married without a beautiful face?’ I was asked often as a child,” says Rani. So when she started drawing, she would paint beautiful?, fair faces on her canvas because that’s what she was told she lacked when she was growing up. Apart from this, just like all other painters, she painted traditional Radha and Krishna love story. “I have lived and grown in a community where women and their opinions were never taken seriously. But it was just not acceptable to me,” she says. She started expressing her dissent in her paintings. “I wanted to start a revolution,” she says. Rani was born in a conservative Brahmin family in Brahmotra, Sagarpur district, Bihar where access to education for girls was rare. She had to put up a fight with her family to continue studies. She completes her matriculation in 1979. “Initially, I used to paint at home. There was a beautiful kohbar art (wall painting) made in our home by my grandmother. I never saw my grandmother but I found inspiration in that painting. My aunt used to paint alpanas, a kind of painting made on the floor with rice flour. I used to sit with her and watch her paint for hours.”

Rani first found work as a painter in an NGO where she was placed in a government Short Stay home for women. The shelter home was for women abandoned by their families or for those who took refuge there to escape escaping abuse from families. She was entrusted with the task of listening to their stories. She took a step further and started painting their life stories on the walls of the shelter home. This is where the seed for contemporary Madhubani paintings germinated in her mind.

She drew her first contemporary painting in 2002. It was of a lesser known Sita. It is believed that Sita, the protagonist from the ancient text Ramayan was born in Mithila, also the birthplace of Mithila painting. Rani’s Sita was brave and fierce instead of the traditionally depicted devout, loyal wife who stepped into a fire to prove her chastity. When Rani was growing up she had seen most of the women in her community as ‘veiled lesser beings in the kitchen’. “I struggled to tear apart the ‘ghungat'(veil) to let the women see the world and let the world see the women, as they chose to in my painting.” Rani says she may not be the first to do so.

She says that ‘if one closely observes’ the Madhubani art, women have always find ways to express themselves in their paintings. She says that there was a time when child marriage was rampant. A lot of child widows prohibited to wear colourful clothes expressed themselves through Madhubani painting. They would take to the canvas to paint the life they wished to live. She says, “Women would paint Radha’s clothes with bright red colours, they’d let her wear her long hair loose, they’d give her colourful bangles to adorn herself with, as if they were dressing themselves up. ” Rani, through her artworks, has also taken to splashing vibrant colours on her canvas. She has explored female friendships, the anxiety of lonely wives of migrant husbands, the new age women. She currently lives in the district of Madhubani where the practice of sex selective abortions is rampant. “There are women getting beaten up by the drunkard husbands, almost like a routine. There are little girl children who are not allowed to go to schools,” she says. These muffled voices are now heard on her canvas. Two of her paintings from 2010, titled Abortion Clinic and Female Infanticide respectively, are a commentary on the social evils that rampant around her. The painting ‘Abortion Clinic’ depicts the doctor as more venomous than a cobra. Women undergo abortions, mostly forced because of the preference for a male child, at the cost of Rs 5,000, according to Rani. Female Infanticide, a follow-up of Abortion Clinic is a response to a gruesome incident that she read in 2006 in a newspaper about how half a dozen female foetuses were found discarded in a well. In the painting, she depicts the many opportunities and blessings that a boy receives — shown standing on a ladder, while the girls face hurdles — a snake coiled beneath the earth she stands on — even as they are left to live lives they did not choose to. ‘Gazing at the moon’

It is believed that till the 1960s, Bharni, Kachni and Tantrik style were mainly done by upper caste — Brahmin and Kayashth women. Since they lived a confined existence, they were made to adhere strictly to specific themes and symbols pertaining to the rituals. They mainly explored religious themes like Gods and Goddesses, flora and fauna in their paintings. People from the lower castes depicted aspects of their daily lives stories and symbols of of Raja Shailesh who was believed to be the guard of the village. They allowed themselves greater freedom of expression by depicting day-to-day life. Jamuna Devi’s portrait of a Chamar disposing of the carcass of a cow is a famous example of this. Jamuna Devi herself belonged to the Chamar community. In an interview with Sahapedia in November 2015, Rani said that Madhubani painting in its globalized form has become a medium through which caste barriers have been broken down. She says, “Traditionally, the kind of themes that Dalits picked up to paint are now also being adopted by artists from the Brahmin community. Artists from the Dalit community are also making mainstream Mithila painting. Godhna painting is being made by women of all castes. Here, no one enquires about the caste of a painter anymore. One can say that Mithila painting is like a movement which broke the caste barrier. We respect Chano Devi as much as Mahasundari Devi, Ganga Devi, Jagdambha Devi or Sita Devi.”

Rani earned her doctorate in Women and Art in Mithila History from Darbhanga University in 2010 and is the first woman from her family to work outside. In March,2014, she visited Syracuse University campus for two weeks to take part in “Transformations in South Asian Folk Arts, Aesthetics, and Commodities” an event focusing on South Asian folk art traditions in the modern world, with special emphasis on Mithila art.

She attributes her reinvention of the art form to tell women’s narratives to inspiration from Jagdamba Devi. She was the first Madhubani painter to receive a Padma Shri in 1975. The honour to the artist from Jitwarpur village in Madhubani brought official recognition to the art form. Rani says Jagdamba Devi was a child widow. “Her last painting was on conjugality, and it is considered to be one of her best.” Guess that explains the relationship between Madhubani paintings and women.

#GenderAnd — Rethinking how we cover gender in mainstream media. Click here to read about our new series. You can also help us find more such stories using #GenderAnd in your conversations. The story was first published on June 1.