The others who left Kairana gharana, many decades ago

The seat of the famous Kirana gharana of Hindustani classical music, Kairana lost its cultural identity long back. Sawai Gandharva, Ustad Amjad Ali Khan and Pandit Bhimsen Joshi are only a few of the names to have come out the Kirana gharana of Indian classical music. (Source: Wikimedia Commons)

Weeks after a lawmaker alleged that there had been an exodus from this small Uttar Pradesh town in Shamli district, Kairana is still in news. While time will tell if it was actually an “exodus” due to any threat or a gradual migration by people in pursuit of a better life, desertion by its people is not new to Kairana. The town had seen a major migration of a different kind almost over a century ago. It was then that Kairana’s music, with a hope to expand and prosper, had left the small town. Prosper it did, and how.

Kairana — or Kirana — was the birthplace of Ustad Abdul Karim Khan (1872- 1937), one of the greatest musical minds Hindustani classical music has ever seen. Together with nephew and another legend Abdul Wahid Khan, Abdul Karim Khan gave India the famous Kirana Gharana gayaki. Among all the gharanas in India, Kirana is one of the most popular and it unarguably boasts of the most number of singers at present.

Kirana was the town where, it is said, emperor Jehangir resettled many families of musicians after a devastating flood destroyed their homes. Many sarangi and sitar players too find their roots in this town. Later, most musicians moved out one by one and enriched the world with their legacies.

It was Ustad Abdul Wahid Khan of Kairana who is credited with introducing Ati Vilambit Laya or slow-tempo method to the Khayal form of gayaki (singing), without which one cannot now imagine a complete recital ever existed.

“Earlier, singers would mainly sing different drut (fast) or medium-paced items during a recital. Abdul Wahid Khan showed how one raga could be sung over one and a half hours at a stretch — complete with aalap, bandish, swartan and boltaan,” says singer Amjad Ali Khan, a descendent of the great uncle-nephew duo. Amjad Ali lives and teaches music in Delhi and performs world over.

According to Joshi, after moving out of Kirana, Abdul Karim Khan lived in Jaipur for some time and later settled down in Miraj, a Maharashtra town bordering Karnataka — the reason Kirana has a huge presence in the two states. Khan’s most famous disciple was Ramachandra Kundgolkar Saunshi, better known as Pandit Sawai Gandharva who immensely popularised the gharana later.

Legend has it that an ailing Khan came to Miraj town in 1889 and visited the shrine of Khwaja Samsuddin Mira Saheb of Kasgar. He sat on the ground under a tree and sang a prayer. Apparently, his disease was miraculously cured. Since his death after four decades in 1937, the same spot under the tree has been hosting a concert every year in his memory during the annual Urs, says Ustad Mashkoor Ali Khan, another descendent of Abdul Karim. The 82nd edition, a three-day event, got over last month.

Not too far away, another event celebrates Kirana singing on a much bigger scale. The Sawai Gandharva Festival is one of the most-awaited annual events in Pune. Sawai Gandharva’s accomplished disciples late Bhimsen Joshi and Dr Gangubai Hangal regularly performed here.

Abdul Karim Khan also frequented the court of Mysore, and was influenced by Carnatic music. As a result, a Carnatic touch can be found in the application of swaras (notes) by many Kirana singers.

“Notes and tones that influence your heart and mind simultaneously,” Joshi says to describe Kirana style of singing. Joshi believes even though singers over the years have tried to incorporate other styles into Kirana gayaki, they have adhered to the core principals, retaining purity of the notes and the “meditative mode” that defines the gharana.

In her book ‘Along the path of Music’, another celebrated artist Dr Prabha Atre has spoken at length on the gharana, “Kirana’s sweetness of tone creates a general soothing effect on mind and evokes emotions that are not mundane. The voice straightway touches the heart…Each note is dipped in emotion and as such, involves even a common listener in music making. The essence is ‘serenity with sweetness’. In a way, Kirana is a withdrawn, introverted style. There is nothing showy, sensational…”

Mashkoor Ali calls Kirana as the “most original of all”. He, however, says it will be wrong to entirely credit Abdul Karim and Abdul Wahid for this. Though the two were instrumental in popularising the gharana, the style originated long before them with Nayak Gopal, a South Indian Brahmin from the court of Alauddin Khilji in the 13th century and later taken forward by Nayak Dhondu, Nayak Vannu, Bande Ali Khan and many others.

“The Kirana ‘family tree’ is huge and each one of them has contributed,” says Mashkoor Ali, who learnt music from his father Ustad Shakoor Ali Khan, a celebrated sarangi player and vocalist who had been a recipient of Sangeet Natak Akademi award and Padma Shri.

Mashkoor Ali, his brother Mubarak Ali Khan, daughter Shahnaz Ali Jahan and nephews Amjad Ali Khan and Arshad Ali Khan, among others, are taking the family legacy forward. Mashkoor Ali, who is based in Kolkata, goes to his birthplace Kairana once every year to spend a few days at their ancestral house. He rues the “lack of music in UP”.

The news of “Kairana exodus” perturbs him. While he says music has nothing to do with the “political issue”, Mashkoor Ali can’t help recall the days he spent there “35-40 years ago”. “There was so much of peace and harmony. We never saw any unrest,” he says. 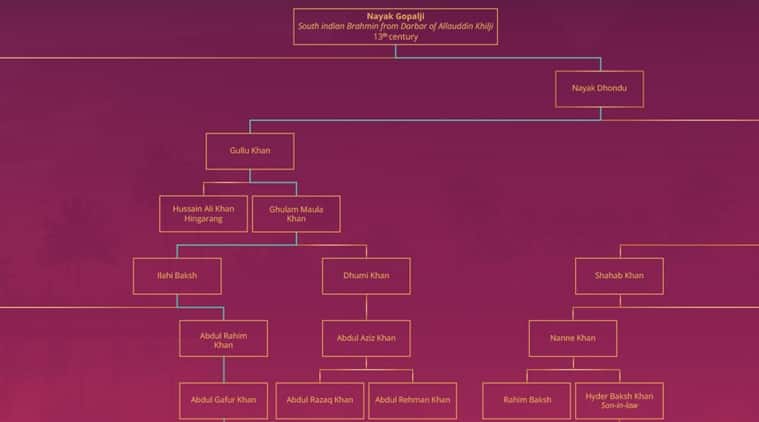 Interestingly, Kirana is not the only gharana that has originated from Uttar Pradesh. Gwalior, Agra and Atrauli gharanas too trace their origin to Western Uttar Pradesh. Going into the history of Hindustani classical music, Shrinivas Joshi says all court musicians left Delhi after 1857 and settled in nearby areas scattered all over Western Uttar Pradesh. And as they established themselves and trained their disciples, many of the gharanas we see now were born, each personifying the various musicians’ personal style of singing.

And as they moved out and spread all over the country along with their rich music, the entire world saw the light of music. Unfortunately, the places they deserted, like Kairana, were only left to guard the ruins of the maestros’ ancestral homes — and deal with “threats” of various kinds.

The Central government is now learnt to be planning “cultural signposts” for Kairana. As part of a nation-wide project of the culture ministry to identify neglected or forgotten sites of importance in terms of classical, popular or contemporary culture, signposts will be put up at such sites narrating their past and resurrecting their history for the current generation.

According to reports, Kairana will have “cultural milestones” across the town, telling people about the lives of the past masters and their work. The ministry hopes this will change the identity of the town and its residents.

Sanghamitra MazumdarSanghamitra is Senior Editor. She writes on a whole range of subjects ... read more