In the land of my fathers: Here’s how art can help bring nations closer

For her first solo in Pakistan, an artist retraces her parents’ footsteps in Karachi and comes back enriched with wonderful memories. 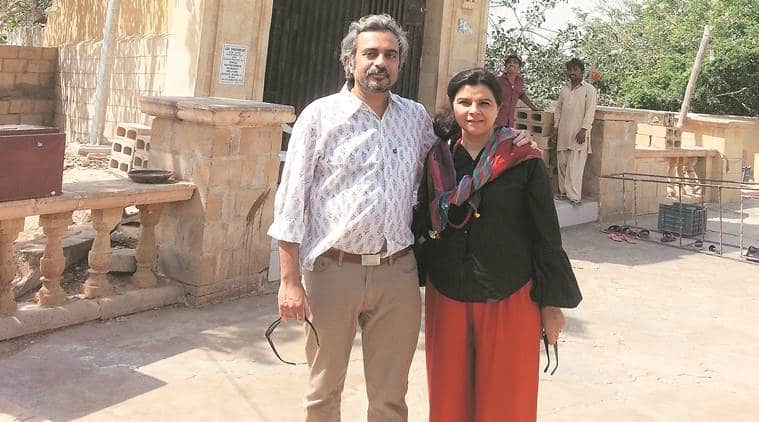 Rahul and Manisha Gera Baswani in front of the Kali Temple.

The gentle, warm sea breeze lightly brushed past me as I stepped on the seemingly familiar soil. A short flight of less than two hours transported me from my home in Delhi to what had been home to my parents. The pre-winter nip in the air in Delhi, which announces the festive season, was replaced by an enveloping warmth and hospitality as I set foot in the City of Lights — Karachi.

Why had it taken me so long to come here? Why was it still familiar even though I was almost a newcomer here (this was only my second visit to the country)? This land had been kept alive in my memory through the many bedtime stories my parents had told me. Stories that they had carried with them when they crossed the borders during Partition, leaving behind love and land. On the atlas of my heart, Pakistan was an island, an abode of my parents which had somehow floated away amidst the tears of Partition. It was a home I had dreamed about through my childhood and now, finally, I stood on its soil to savour the sweet air.

My solo show of paintings, ‘Hope is the thing with feathers’, was being presented at Sanat Gallery. Zeeshan Mohammad, an old friend and a significant name in the contemporary art scene in Pakistan and now also in India, was instrumental in putting this exhibition together. I was informed by Abid Merchant of Sanat that this was the first solo by any Indian artist in Karachi, an overwhelming honour for me.

October 28, the day of the opening, saw a big turnout. There were old friends and many others from the city’s cultural fraternity whom I did not know. Many had come a long distance, some from other cities, only to welcome me. Older artists, who wouldn’t usually go for crowded show openings, also came to “meet the artist from India”. I could never have imagined a warmer welcome had I not been there. Tassaduq Sadequain, the nonagenarian maestro, recovering from a leg fracture, climbed the stairs and graced the opening. His gesture was an honour to me and his affection made me feel like the queen of “arts”. I experienced and saw for myself how beautifully and effortlessly the arts can help bring our people and nations closer. I know it is a naïve question to ask, but who are these people who won’t let us and why?

Each day seemed more special than the last in the week that followed. I made studio visits to Karachi-based artists, photographing them in their creative spaces. My ongoing project of 15 years, “Artist through the lens”, in which I have been photographing Indian artists in their studios now found a parallel path rather organically. Rahul and Manisha Baswani with the art fraternity of Karachi.

Conversations over cups of coffee, viewing art and leafing through books and catalogues made each visit a delight. Interestingly, with almost each studio visit, also came an India connection. Many artists still had families in India. Some like the charming Meher Afroz had migrated to Pakistan as late as1971 after studying art at the Lucknow Art College. It felt that there was always so much to hear, talk about and share but never enough time.

Over the next few days, the customary stopover to the majestic Jinnah House was followed by a visit to the Frere Hall where I met a sari-clad lady, Leela. Her Hindu family did not move during the Partition and she has never visited India as she was Sindh-born and had no relatives across the border. She suggested we visit the ancient Shive Ratneswar Mahadev Temple nearby. It was like any other visit I would make in India and I wouldn’t have known any difference had I not come across a poster with an image of Lord Shiva, with details of an upcoming ceremony written in Urdu. After this, I was better prepared when I came across a Ganesh statue adorned with a garland of Pakistani notes.

It was soon time for me to return to my city, Delhi. After weighing my creaking suitcases, I felt the weighing scale stare at me accusingly. With great reluctance, I took the hint and stepped on it. My anticipated guilt came true as the scales testified the shameless intake of kebabs and the sumptuous nihaari all week.

I returned home, rich with memories and richer in friendships. Unlike a trip to the US or Europe, I felt ready to return almost as soon as the suitcases were emptied. I intend to return soon, hopefully this time, with my parents, to re-kindle their memories. You and I might just bump into each other at the wonderful food strip at Port Grand.

Table for one: Are single diners given a warm welcome?