Historians trace the origins of Durga Puja in West Bengal to sometime around 1757, in the months after the Battle of Plassey, when Nabakrishna Deb, the head of Sovabazar Rajbari family of Calcutta invited East India Company employee Robert Clive to pay respects and offerings at the feet of the deity. But this might just be half the story 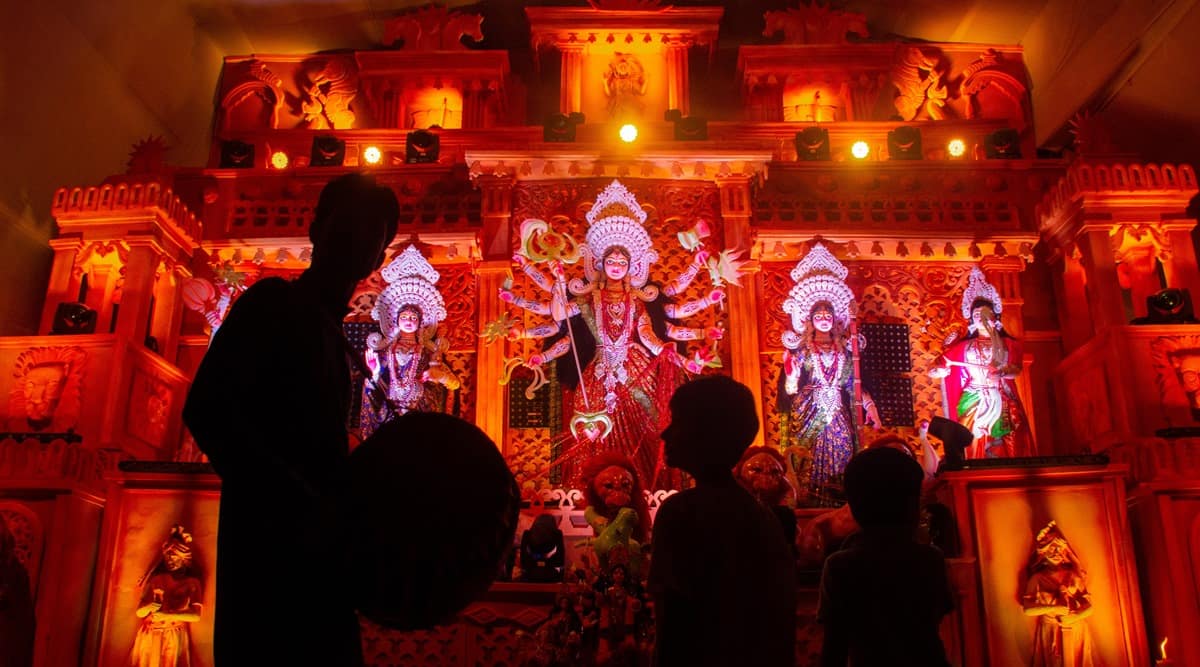 Idols of deities in a pandal during Durga Puja in Chittagong, Bangladesh. (Photo credit: Aneek Chanda)

When the British weaponised religion to brutally carve out separate nation states in the Indian subcontinent in 1947, they also divided the province of Bengal, resulting in the creation of the Indian state of West Bengal, and the Muslim-majority East Bengal, formerly a province of Pakistan and now Bangladesh.

ALSO READ |Durga Puja 2021: In pandemic, some childhood nostalgia and a strange disenchantment

The ruthless cleaving of the land had many effects. A less-discussed impact can be witnessed to this day in the Autumn festival of Durga Puja, celebrated prominently in West Bengal, other parts of eastern India and Bangladesh. Although exact figures are difficult to find, some 30,000 ‘sarbojanin pujas’ (community pujas) are celebrated in Bangladesh, Dhaka-resident Saumen Nag told indianexpress.com. “Of these, less than 25 would be barir pujos (within a household),” said Nag, whose family puja is three generations old. Saumen Nag’s barir pujo that is three generations old, celebrated to this day in their family home in the outskirts of Dhaka. (Photo credit: Saumen Nag)

Historians trace the origins of Durga Puja in West Bengal to sometime around 1757, in the months after the Battle of Plassey, when Nabakrishna Deb, the head of the Sovabazar Rajbari family of Calcutta invited East India Company employee Robert Clive to pay respects and offerings at the feet of the deity. But this might just be half the story.

The narrative of attributing the first ‘barir pujo’ to Nabakrishna Deb almost erases the history of the festival in what is now Bangladesh.

In his writings, Bangladesh-based historian Rabindranath Trivedi points to historical records that indicate that the celebration of Durga Puja on a grand scale was started by Raja Kangsha Narayan in the late 1500s in Taherpur, a municipal town in Rajshahi, Bangladesh. Historically, the celebration of the festival was limited to the nobility in the undivided Bengal province. Trivedi writes that it was only during the late 19th century and the early 20th century that the celebrations became more widespread and more importantly, inclusive, open to the public, taking the shape and form of ‘sarbajonin pujo’, that are more commonly seen today.

Factors like urbanisation patterns and the socio-cultural and socio-economic conditions in the Bengal presidency before 1947 have had lasting effects on how the festival continues to be celebrated on both sides of the Indo-Bangladesh border. 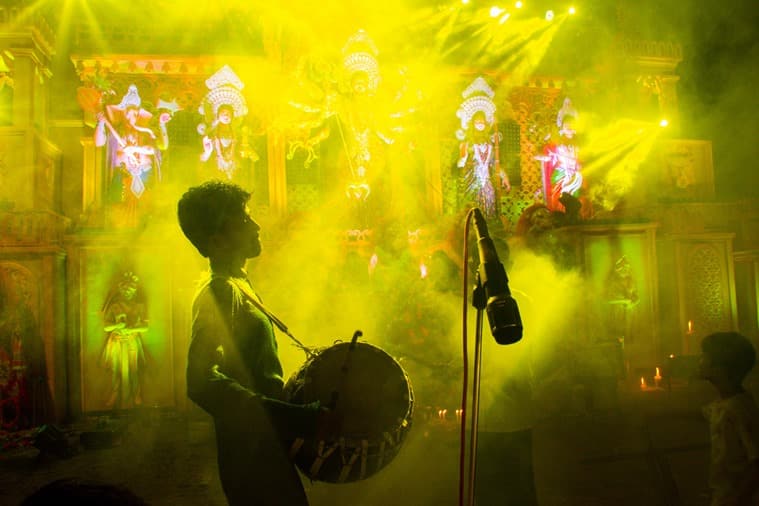 Idols of deities in a pandal during Durga Puja in Chittagong, Bangladesh. (Photo credit: Aneek Chanda)

“Bangladeshi society is largely rural and agricultural. Unlike Kolkata, where a city-based culture developed over centuries, that did not happen in the case of Dhaka,” explained Ananya Das, a UK-based scholar who conducts research on culture in Bangladesh. According to Statista, in 2019, approximately 62.6 percent of the population in Bangladesh were residing in rural areas.

“People had homes in the villages and would migrate to Dhaka for work,” Das said of the scenario prior to 1947. The celebration of the festival, therefore, would be centered around their homes, most of which were in smaller towns and villages.

ALSO READ |Durga Puja 2021: Pandal themes that range from Burj Khalifa to Bollywood and Kolkata in the 70s

In this part of the Indian subcontinent, after the British shifted administrative operations to Delhi, Calcutta remained the cultural capital, a factor that may have contributed to the ways in which the city’s nobility were able to hold on to their religious practices and sustain it in the city, Das said.

Hindu families in Bangladesh interviewed by indianexpress.com said that while religious customs are largely the same on both sides of the border, the automatic absorption of local socio-cultural practices over the years have resulted in some differences. “In Kolkata’s pujas, there tends to be pomp and some artificiality. But in ours, that is less, perhaps because it is in a village,” said Pinaki Das, whose family puja in Sylhet is close to 350 years old and still practiced in the way Das’s forefathers would. 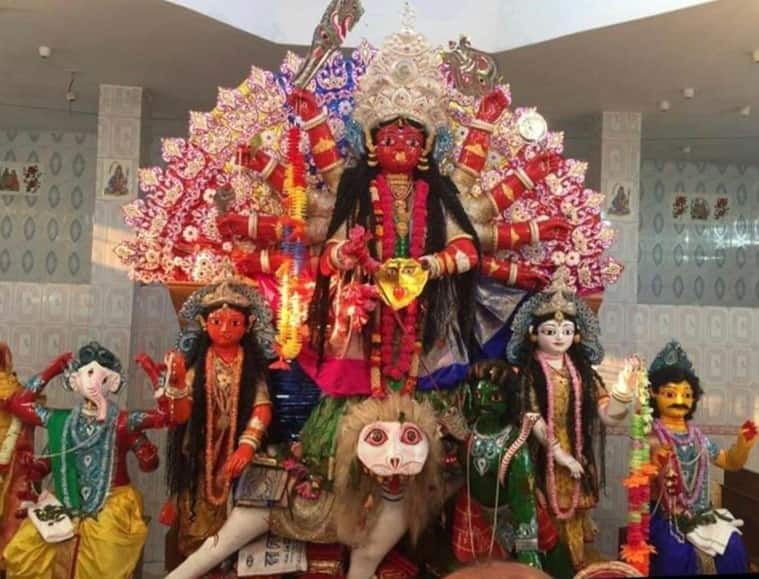 Pinaki Das’s family puja in Sylhet, Bangladesh, is close to 350 years old and is still practiced the way it would be done during Das’ forefathers’ time. (Photo credit: The Das family)

Das believes that in Bangladesh’s villages, Durga Puja occurs with more solemnity than in West Bengal because rituals continue to be followed more strictly. “It is not as sophisticated, and sticks to the scriptures.”

But it is more than just the stringent adherence to religious customs that sets Bangladesh’s pujas apart, local residents interviewed for this report said. The features on the idols of the deities have remarkable differences that are visible only if one really pays close attention. The idols in West Bengal remind 24-year-old Sharbani Datta of portraits of women in Jamini Roy’s paintings, she said.

The deities in Bangladesh, Das believes, are more indigenous in form and execution, in part because the pujas were largely located in rural settings and reflected local aesthetic styles. These artistic differences might just be a result of Calcutta being a seat of the development of art and culture, she said, with other urban centers in undivided Bengal having drawn inspiration and influence from the artisans of Kumartuli. Over the years, Datta has seen several changes that have happened in her family’s century-old barir pujo in Chattogram. Hindu families that observe Durga Puja in their homes in this elaborate way have witnessed the size of the celebrations reduce considerably over the years.

“High costs are a huge reason. In my family, many live overseas, so family members have reduced in number,” explained Nag. Bigger families meant that the ceremonies of this size could be executed with more ease, something that is challenging today. “It is celebrated in similar ways in Bangladesh, but perhaps not as exuberantly as it is in Kolkata,” he said

Advertisement
ALSO READ |Durga, the Himalayan goddess, arrives to reign over the megapolis of Kolkata

In Muslim-majority Bangladesh, there are other challenges that Hindu families face, but it is not an issue that everyone is willing to openly discuss, due to concerns for their safety. Just days before the start of Durga Puja, the Dhaka Tribune reported on the desecration of the deities’ idols in Kushtia town. The report stated that clay idols left to dry by artisans were found broken the next morning, and investigations were ongoing.

“Every year, we hear reports of idols getting desecrated and pandals being vandalised. A few years ago, some local Muslim youths attempted to destroy ours in the village, but they weren’t successful. They weren’t able to do it again because our family is well-known in the village and security was increased after the incident,” said Datta. Das too cannot remember the last time the festival was celebrated in the country without being overshadowed by incidents like these. 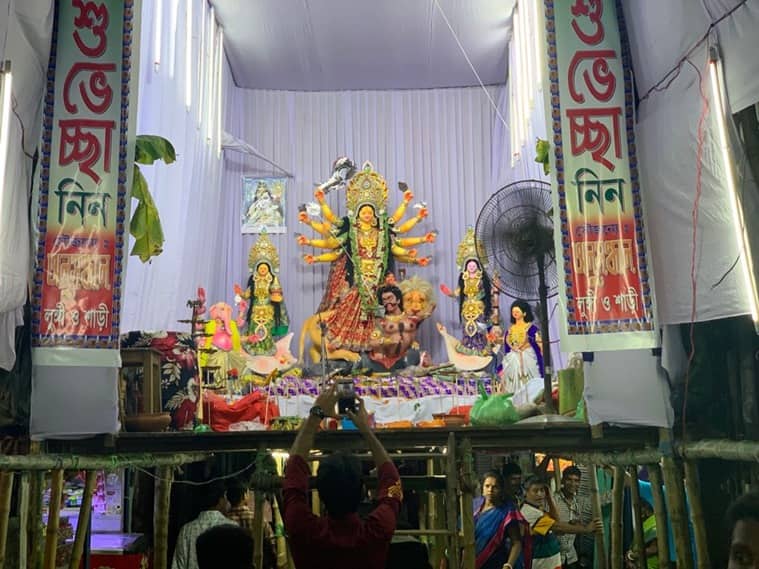 An idol of Durga inside a pandal in Dhaka. Hindus in Bangladesh believe that Durga Puja is celebrated more exuberantly in West Bengal, India. (Photo credit: Sharbani Datta)

The impact of celebrating Durga Puja as a minority community in Bangladesh is felt in both overt and subtle ways, those interviewed for this report told indianexpress.com.

Women also experience the festival differently there. For one, Datta feels safer inside pandals when she is in West Bengal. “Kolkata has a culture where people customarily roam around all night long to visit pandals and engage in revelry. One year, I was there in the city for two days and was out all night, returning home at dawn,” said Datta. “In Bangladesh, that concept isn’t there in urban or rural centers. By 10 pm, the pandals start closing down and reopen the next morning, perhaps because we are a minority here.”