If you have tears, prepare to shed them now

Jayalakshmi Gopalan is taking the ancient Tamil folk ritual of Oppari to the stage and forcing her audience to contemplate the scope of mourning in their lives. 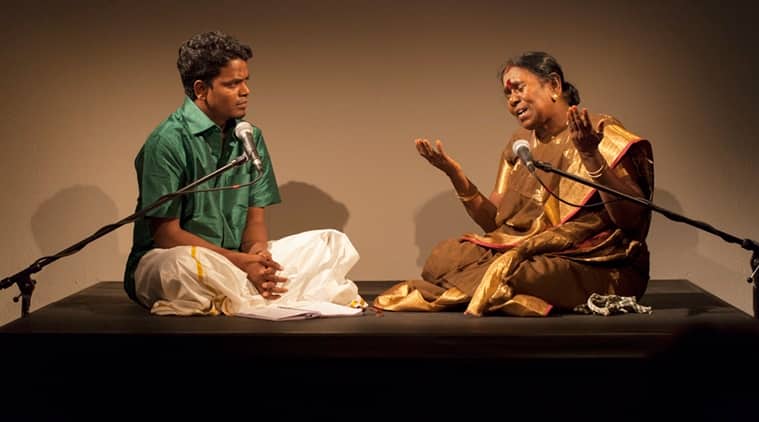 Oppari exists on the margins of society and finds meaning only through tragedy.

Jayalakshmi Gopalan made audiences cry at the Festival Belluard Bollwerk International in Switzerland last month. Before that, a group that watched her rehearse in a Delhi studio were visibly moved as well. Tears flow quickly in Jayalakshmi’s shows — setting her apart from the growing number of comedy acts across the stage and on screens. “When did it start, we do not know. Who started it, we don’t know. The origins of Oppari go back to the time when somebody died and a woman began to cry,” she says. Oppari is an ancient mourning ritual and profession practised by a Dalit sub-caste in Tamil Nadu, but Jayalakshmi, 68, is alone in putting it on the national stage.

Her show, which premiered in Switzerland, is titled Notes on Mourning. It is structured like a lecture-demonstration in which Jayalakshmi is interviewed by Arivazhagan Arumugam, a performer from the Periyar caste, known for beating the drums in funeral processions. They speak in Tamil about the life of an Oppari singer, while an interpreter simultaneously translates the dialogues in English to the audience via headphones.

The discussion is autobiographical and complex, and needs the complete focus of the audience. Oppari performances are intended to keep mourners awake through the night as the body of the deceased lies at home, awaiting cremation in the morning. In a conflict-ridden world, Jayalakshmi adds, people need to feel the pain of others. For generations, Oppari singers have been uniting listeners in empathy. The conversation between Jayalakshmi and Arivazhagan changes with every show, allowing director Amitesh Grover and researcher-dramaturge Arnika Ahldag to explore different aspects of Oppari. Notes on Mourning will be staged in India later this year.

“When we began our research into the tradition of mourning, we found that the Western world seems to have got rid of it. In urban cities of India, the rituals that follow death have shrunk from 13 days to four days and, then, to one day. Do we ever sit down and mourn? The post-capitalist world doesn’t want us to think about loss. This is one human experience that we are close to losing,” says Grover.

Notes on Mourning is the Delhi-based director’s attempt to show that India has had a long tradition of mourning rituals in states such as Assam, Andhra Pradesh, Rajasthan and Maharashtra. In Lebanon, mourning is a part of a traditional dervish ritual, while Iran has the “Mourning Mothers”, comprising widows and relatives of those killed in a conflict with government forces following a presidential election in 2009. “This is a new grammar in theatre performance that I am trying to evolve. We call it documentary theatre where we put the real person and the real story on stage,” says Grover.

For Jayalakshmi, the impulse for the performance is deeper. Like the Dalits who perform it, Oppari exists on the margins of society and finds meaning only through tragedy. Death alone can make an Oppari performer sing. They create elaborate verses about the deceased for an audience of the bereaved. By keeping listeners in tears, over the course of several hours, a singer attempts to create a sense of catharsis in the household of the dead. Notes on Mourning is a radical attempt to place Oppari on stage and claim a space for it as a performative art form.

Off stage, Jayalakshmi is a matronly woman who wears bright saris, sindoor and gold jewellery, and smiles easily. “I never cry. Even when there is a problem at home, I find that I cannot cry. All this impulse for tears had built up inside me and, with this show, I became free,” she says. She speaks with a tuneful lilt, which becomes stronger when she sings. “A singer must have strong feelings — other than that, there is no other requirement for an Oppari performance. Why are you singing? Who are you singing for? Only when you know this can you become a good Oppari singer and communicate pain. The tune and lyrics come automatically. There is no riyaaz or rehearsal,” she says. Her style of Oppari is to express the universal suffering by chanelling it through her personal experiences.

One of the most powerful moments of the show is when Jayalakshmi remembers her father. She recedes to the time when she saw his lifeless body. The audience feels uneasy as the primal fear of losing one’s parent looms large. Her body, wracked with grief, sways and her full-throated voice rises and falls as she talks to her father. “You were a freedom fighter, you worked with Subhash Chandra Bose, for six months you went to Germany,” she wails, beating the ground with her hands. “In Germany, you met a girl you fell in love with. I found her photograph one day and you told me all about her, though my mother, whom you married when you came back to India after Independence, was angry,” she continues, creating a detailed image of a simple young man, whom audiences relate to easily.

Another time, she mourns the 94 children who were burnt to death when the thatched roof of their primary school caught fire in Kumbakonam town, Thanjavur, in 2004. Tears spilling from her eyes, Jayalakshmi describes the children’s games and mischief, their dreams for the future and their horror of being trapped in a burning building; and the great sorrow that their passing has left for their families and the village. With no visual aid, Jayalakshmi places the audience at the centre of the tragedy, evoking a collective mourning for the young children. Grover says that mothers in the audience in Switzerland broke down when this segment was performed.

“I have only ever been invited to sing Oppari in plays. Theatre is interested in what a performer can do on stage, not in my identity or history. This is the first time that a performance is interested in who I am and what my story is,” says Jayalakshmi, who was born into a lower-caste family in Thanjavur, in Tamil Nadu. Oppari was happening around her as she grew up, especially “when wealthy people died” Music was a gift from her father. “He would catch me and say, ‘Sit and sing what I sing,’” she says.

Jalaylakshmi was married off at 18 to a man “who had a government job”. Soon after, she started her career singing for the radio and the stage. She also began to work for the Tamil Nadu government’s skill development and adult education project “as part of which women over 40 came to study”. Jayalakshmi found that they were skilled singers, with an oeuvre that extended from lullabies to farming songs and each one had a deep knowledge of Oppari. She began to learn the three kinds of Oppari from them — from the simple lament that eulogises the life of the deceased, to a style in which the performer speaks on behalf of a relative, exaggerating his or her affection for the dead person, to a more physical form that involves chest-beating and jumping. Her voice, honed by her father in childhood, brought Jayalakshmi to the notice of All India Radio, Trichy, and a number of theatre directors.

During a sequence in Notes on Mourning, Jayalakshmi remembers the theatre director who would invite her to sing Oppari in his plays and taught her a few things about acting on stage. She began to treat him as her guru and, when he died, she went to his house to perform Oppari. “He was an upper-caste Brahmin and his family did not allow an Oppari,” she says. In Notes on Mourning, she fulfils her wish by performing an Oppari for him.

Jayalakshmai does not mourn in houses of the bereaved like other Oppari singers. A stage performer from a young age, she has brought Oppari to the theatre and performed it during scenes of war and tragedy. A powerful performance was of the Trojan Women directed by Prof S Ramanujam, a retelling of a Greek myth, in which “the play was full of Oppari. From start to end, the Trojan women sing and cry because a war is on,” she says.

Notes on Mourning is also an attempt to start a conversation on how Oppari is not validated by the Tamil Nadu government. “The state does not recognise that Oppari is a proper art form that needs support and that there are artistes who need support to improve their living conditions and further their art. Drummers who play for Oppari singers are recognised but the singers are not,” says Arivazhagan.

After the show is over, Jayalakshmi casually drops the bomb to those who stay back to talk to her. Her family does not know she performs Oppari songs. Many Oppari singers are shunned by their families and cast out of home. To listeners of All India Radio, Trichy, Jayalakshmi is the mellifluous voice that brings alive forgotten folk songs and that is how she is known in society. “While leaving home, I say that I am going to perform, never that I am going to perform Oppari. My family knows me as a singer of folk songs,” she says. For more than 30 years, Jayalakshmi has lead a double life. “I am married into a family of hereditary astrologers and they won’t accept Oppari singing. Astrology is for good things, Oppari is for bad things,” she says, “But I want to keep performing Oppari.”