This Diwali, if intend to play a friendly game of cards, make sure you have your basics right! 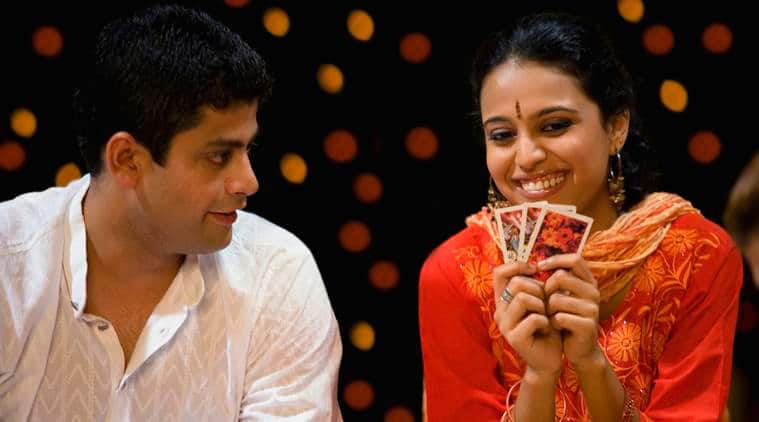 Played in a group of four to seven this is the main attraction of any Diwali night party. (Source: Thinkstock images)

Diwali is here and our tables are set for the various card games that are synonymous with the festival! Yes, after all the effort of cleaning and decorating the house and the countless chores involved, everybody need some fun and what’s better than the popular Teen Patti.

But, should you be a bit rusty, or a complete novice, let us review the ground rules for you so that you have your fundamentals in place and end the night on a high.

Played with an international 52-card pack, the card rankings are in the usual order from Ace, which is the highest, down to 2 — the lowest. Any number of players can take part in one game, but it is probably best to have four to seven players and seal the deal.

The game begins with a dealer dealing out the cards one at a time until all participants have three cards each. The players then take turns to call out who has the best three-card set. Each person has the option to look at their own set hand (playing seen) or to leave the cards face down on the table (playing blind) before raising the stakes or folding, as they deem fit.

The Hand order – ranking of cards

The ranking of the possible hands (sets), from high to low:

* Trio or Trail: Three similar cards. (that is, three aces would mean highest and three 2s would be lowest.)

* Straight run or Pure Sequence: Three consecutive cards for the same suit (diamonds, hearts, clubs or spades). The ranking order is similar. (that is, A-2-3, which is the highest straight run. Next is A-K-Q, K-Q-J and so on down to 4-3-2, which is the lowest.)

* Normal run or Sequence: Any three consecutive cards not belonging to same suit. (The highest and the lowest is in same order as in straight run.)

* Pair: When you have two cards of the same rank in hand. Between two players having a Pair, compare the similar cards first and the one with higher value wins the bet, if both players have similar common card then the third one in the set decides their fortune. (The highest pair hand is A-A-K and the lowest is 2-2-3.)

* High card: This does not belong to any of the above category. If two players share a common high card in rank, the next highest card is used to determine the winner. (The best hand of this type is A-K-J of mixed suits, and the worst is 5-3-2.)

How the game is played:

The players start off with the dealer and continues in a clockwise manner. Each player can either put further choose to stay in, or fold. Folding means you are dropping out of the game and forfeit your chance to win. So think before you fold!

Please note that those playing ‘seen’ have much more at stake than those playing blind, it’s to balance off the fact that they at least know what cards they’ve been dealt.

This goes on till there are only two players left. At the end, the two have a card face-off, and the one with the higher value of cards, wins!

If you have got a hang of all these basic tricks then get on to the next level and be a pro with other variations of the game. Among the wide array you can opt for – Odd Sequence for beginners that is quite similar to sequence with just odd number to filmy version of Maatha (sticking the cards on your forehead).

Odd sequence: This when you want to add a twist to the usual sequences of Ace-2-3 or Jack-Queen-King. In this, a sequence is declared with alternate cards, such as Ace, 3, 5 or 9, Jack, King.

Maatha: In this, each player is dealt a card, which s/he sticks to their forehead or simply places it there. So, everyone can see the others’ cards, and not their own. You take a calculated guess at what your card can be and play accordingly. This variation is extremely popular among the younger crowd.

And for the experts there is Folding Joker, 369 and a one-eyed Jack or the fatal Sudden death, choose your pick this Diwali and have fun!

But have you ever wondered, why we play cards on Diwali in the first place?

It is believed that playing a dice game is auspicious during the Deepavali. According to Hindu mythology, it is said that goddess Parvati played dice with her husband Shiva and loved the game. She was extremely pleased and affirmed that whoever played dice on the festive day shall remain prosperous throughout the year. However, over time, dices were replaced with card games to keep the tradition alive. And given the mystery involved in such games, prosperity or not there is much fun to be had amid friends and family for sure.

Though there are several card games that are played on Diwali night – Rummy, Poker, or even 3-2-1 – in India, it is Teen Patti that rules the roost. The Indian card game is very similar to poker that is even played online at times, and is a desi version of the British card game ‘3 Card Brag’. The name comes from the human propensity to brag when we have the best set in our hands and win the loot at the end.