Pablo Picasso painted his fifth highest-selling painting Garçon à la pipe (Boy with a Pipe) when he was 24 years old in 1905. Why did Picasso choose to paint this? Is it worth $104 million? 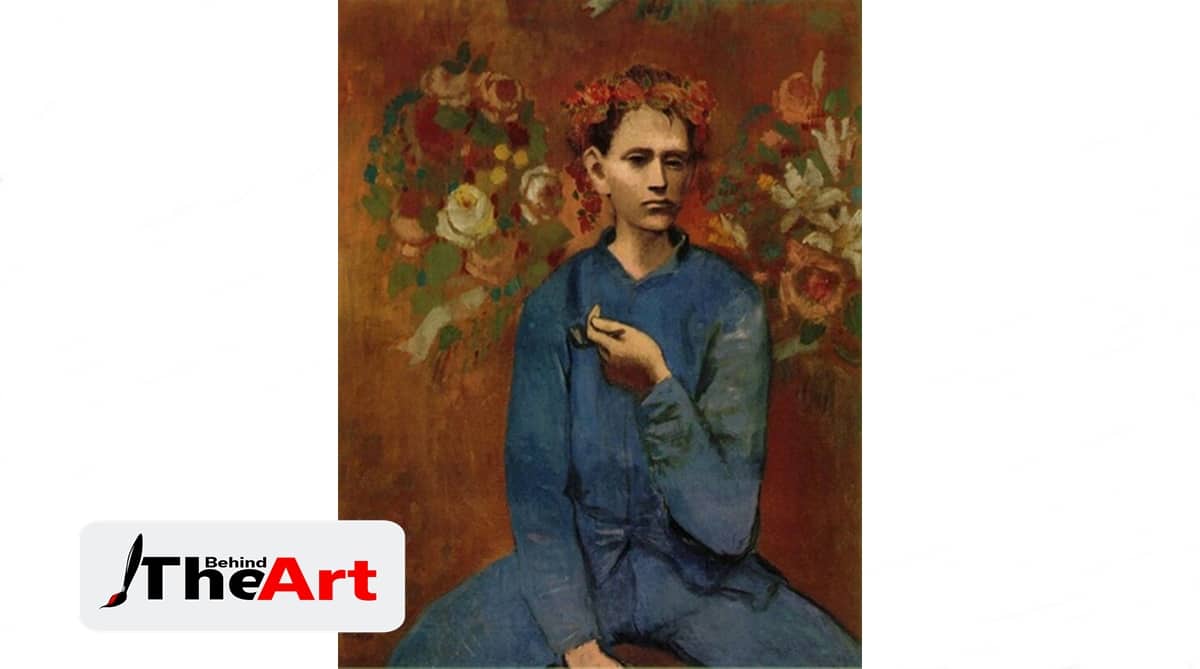 The artwork is listed as one of the most expensive paintings, after being sold at Sotheby's auction for $104 million on 5 May 2004 and is currently a part of a private collection. (Photo: wikiart.org)

Pablo Picasso painted his fifth highest-selling painting Garçon à la pipe (Boy with a Pipe) when he was 24 years old in 1905. This masterpiece was created during his Rose Period, soon after he settled in the Montmartre section of Paris, France. This oil on canvas painting depicts a Parisian boy holding a pipe in his left hand and wearing a garland or wreath of flowers. The artwork is listed as one of the most expensive paintings, after being sold at Sotheby’s auction for $104 million on 5 May 2004 and is currently a part of a private collection. Why did Picasso choose to paint this? Is it worth $104 million?

Also Read |Behind the Art: Why is Picasso’s Girl Before a Mirror worth about $179.4 million and what does the painting really mean?

Story behind the art and the boy with a pipe 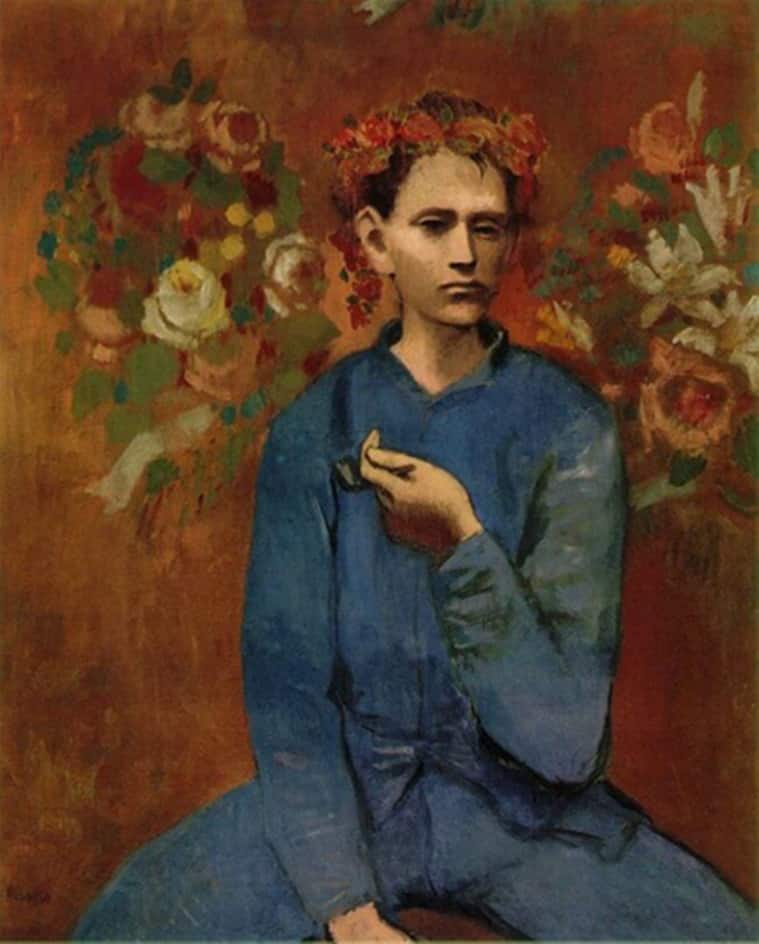 This oil on canvas painting depicts a Parisian boy holding a pipe in his left hand and wearing a garland or wreath of flowers. (Photo: wikiart.org)

Picasso was not always so well known and liked during his initial years of being an artist. In 1905 at the age of 24, he was still a struggling artist who was living in poverty in a dilapidated artist building n Montmartre in Paris. He had recently moved on from his Blue Period in which he only painted using blue and green hues. He was now in a new and more optimistic phase known as his Rose period. He wanted to use more colours other than blue on the canvas and his subject for this painting was a local boy named P’tit Louis who died at a young age. Very little is known about the boy and his background. According to a variety of sources, the boy was a model in his teen years who hung around Picasso’s studio and volunteered to pose for the oil work. Picasso’s comments about the boy were that he was one of the “local types, actors, ladies, gentlemen, delinquents… He stayed there, sometimes the whole day. He watched me work. He loved that. ” It was clear that either Picasso did not want the world to know who the boy was or he did not know the boy himself. However, as an artist, he spent a lot of time deciding on the position in which he wanted to paint the boy. After much repositioning of the model, Picasso decided to go with the boy sitting down, holding a pipe. The boy is dressed in blue overalls and wears a garland of roses on his head. André Salmon, a friend of Picasso, described in 1912 how he had altered what was originally a study of life into the current artwork in a sudden flash of inspiration by adding the flowers.”One night, Picasso abandoned the company of his friends and their intellectual chit-chat. He returned to his studio, took the canvas he had abandoned a month before and crowned the figure of the little apprentice lad with roses. He had made this work a masterpiece thanks to a sublime whim.”

Picasso’s rendering of “P’tit Louis” also has elements of classical art. He was inspired by the work of the French Neoclassical painter Ingres. Like Picasso’s Young Girl with a Flower Basket, which was painted in the same year, Garçon à la Pipe conveys conflicting imagery of innocence and experience. Picasso described the boy as an “evil angel”. In this painting, the boy wears a garland of roses on his head to symbolise the blood of the Eucharist, a reference to the transition from youth to maturity. Picasso also depicts the contrast between the harsh street life that Louis endured and the innocence of his youth.

Subscriber Only Stories
View All
UPSC Key- January 30, 2023: Know about Project 39A, Beating Retreat Cerem...
UPSC Essentials | Key terms of the past week with MCQs
ExplainSpeaking: How to evaluate a Union Budget
Mahesh Vyas writes: Why the job shortage is for real
Apply New Year promo code SD25
Also Read |Behind the Art: Why was Pablo Picasso’s ‘Les Demoiselles d’Avignon’ so controversial in its time?

Criticism and impact on popular culture

The painting was first bought by John Hay Whitney in 1950 for $30,000 and then on May 5, 2004, the painting was sold for US$104,168,000 at Sotheby’s auction in New York City. Sotheby’s did not reveal the name of the buyer though sources say that it was Guido Barilla, owner of the Barilla Group. At the time, it broke the record for the amount paid for an auctioned painting. The jaw-dropping price of the painting made several art historians question its worth. Many art critics have stated that the high sale price of Garçon à la pipe has much more to do with the artist’s name than with the merit or historical importance of the painting. According to news reports, Picasso expert Pepe Karmel, reached New York the morning after the sale and was stunned to hear about the price. He was quoted to say “that a pleasant, minor painting could command a price appropriate to a real masterwork by Picasso. This just shows how much the marketplace is divorced from the true values of art.” However, some genuinely appreciate this painting and say it celebrates images of adolescent beauty and is one of the most beautiful paintings of Picasso’s Rose Period.

Whether Picasso wanted to merely practice portrait painting or change the landscape of modern art, as a 24-year-old poor artist he would have never thought his painting would sell for such a high price. The painting’s worth not only shocked art critics but also sent shock waves through the entertainment industry. Calvin Harris’ 2017 song “Slide” contains the lyrics “I might empty my bank account and buy that boy with a pipe”. Vocalist Frank Ocean explained that it is an allusion to, “a Picasso painting that sold for so much money”. It is quite evident that regardless of the historical importance and relevance of the painting, owning a Picasso painting is a status symbol of its own.

Next up in Behind the Art: What is the significance of Picasso’s Dora Maar au Chat which is currently the sixth highest-selling painting by the artist? 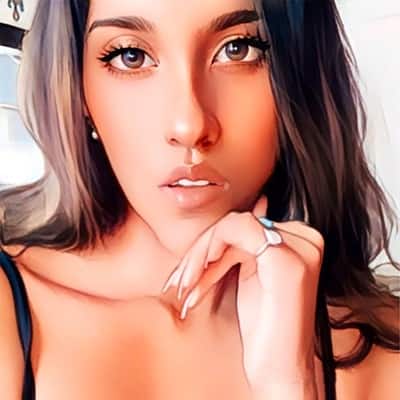