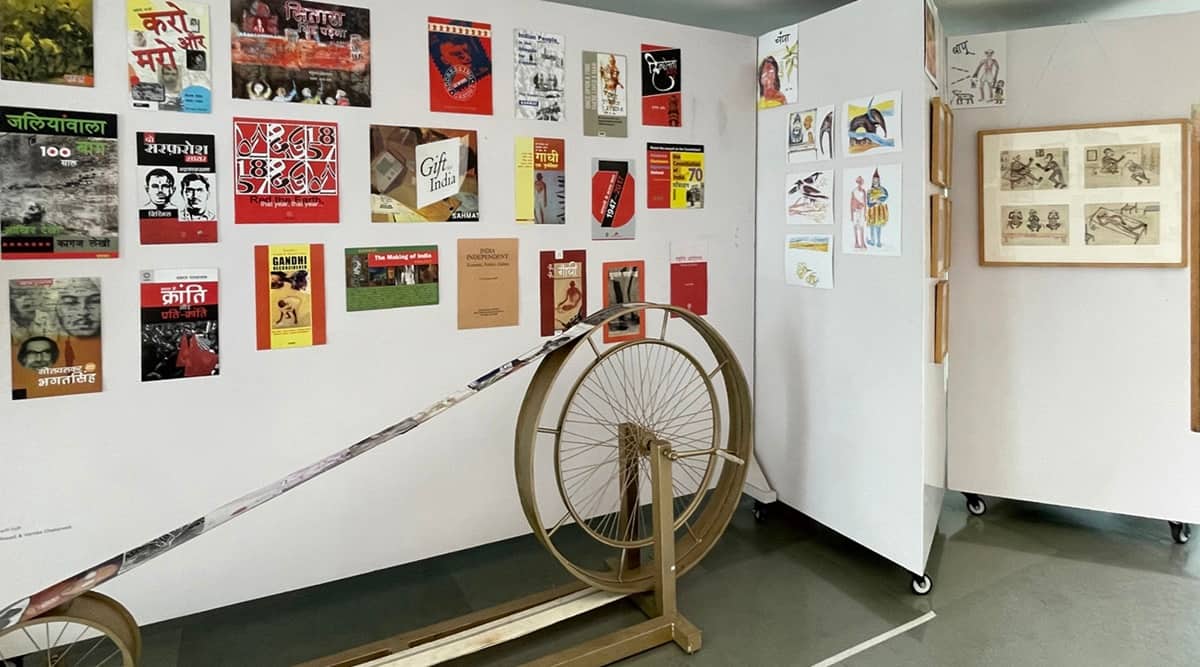 The covers of various publications at the exhibition.

A year before India’s independence, Mahatma Gandhi visited Noakhali (located in the then East Bengal) just after it was engulfed by riots targeted at the Hindu population in 1946. A disappointed Gandhi had stated that if Noakhali is lost then India is lost, suggesting if communal infighting wins then India will lose as a nation. Years later, the Safdar Hashmi Memorial Trust (SAHMAT) is revisiting that statement through its exhibition titled “India is not Lost” at Jawahar Bhawan in Delhi. “The point that we are communicating with this exhibition is that India is not lost, and that we still have that resistance and culture against communalism. Artists have always stood for freedom, equal rights and secular values, which runs right through the exhibition,” says Ram Rahman, photographer, curator, and co-founder, SAHMAT.

The showcase looks at iconic moments of India’s long struggle for independence largely through SAHMAT’s initiatives organised over three decades, since it was established in 1989 after the demise of the playwright, poet, and political activist Safdar Hashmi. He was violently attacked while performing a street play in Sahibabad, near Delhi. “The success of SAHMAT has been to keep a space alive for an engaged artistic community, activist art, and progressive values, giving freedom of expression,” says Rahman. Talking about the display curated and designed by artists Aban Raza, Deepani Seth and Arushi Vats, Rahman adds, “Over the years, through various projects, we have looked at the legacy of the national movement in many different ways, either through figures like Gandhi and revolutionaries like Bhagat Singh and Udham Singh, or the war of 1857, the birth of an independent India and the making of the Constitution. The idea was to show how artists have consistently engaged with how we fought for Independence and how we gained it. We are also looking back from the time when these works were done, and where we stand now. We felt it was important to bring some of this into focus, given the kind of ugly debates that we are now seeing on nationalism, national movement, and this attempt at rewriting history.”

So if we are reminded how during the 1857 mutiny soldiers from different communities fought in unison against colonial tyranny, a wall panel on the Jallianwala Bagh massacre notes how “the rise of the assault on historical veracity and rigour through unsubstantiated amendments to school textbooks, spurious claims in the public sphere, and the persecution of historians and public intellectuals have made the need for disseminating histories of popular struggles even more relevant”. There are also posters on Bhagat Singh, Udham Singh, Dandi March, and the Champaran Satyagraha, and banners of performances by SAHMAT. Select works from its numerous projects over the years — including “Gift for India,” “Making History Our Own,” “The Making of India,” “Postcards for Gandhi.” — are on display below MF Husain’s murals based on India’s freedom struggle. “It is poignant and evocative since Husain was exiled and targeted by extremists, and these are his paintings on the national movement,” says Rahman. In finding a means to reach the larger public, SAHMAT turned to Gandhi’s use of postcards and letters. Its 1995 project ‘Postcards for Gandhi’ saw over 100 works by 100 artists on the ‘idea’ of Gandhi, displayed and sold at a uniform rate. Two years later, in 1997, nearly 200 artists imagined and created a ‘gift box’ “as a sculptural object of three dimensions that has the form of a five-inch cube” for the project “Gift for India”. The materials ranged from wood and iron to cotton, aluminum, and copper. In the ongoing exhibition, on display are, among others, artist Vijayan Kannampilly’s box with its one side painted in red, with an observation on how India has taken “One step forward, two steps backward”. Ranjana Appoo, on the other hand, fills her gift box with dried plants and words such as ‘love’ and ‘accept’.

On the wall panels, among others, are the numerous pages of Uma Shankar Joshi and Madhvi Parekh’s book Bapu, and Mulkraj Anand and Shamshad Husain’s Bapu Ka Etihasik Mukadma. If Mahula Ghosh’s collage depicts Ambedkar’s India, Parthiv Shah too brings together leaders who fought for an independent India. “In terms of cultural imagination, we have not yet been defeated by communalism or majoritarianism,” says Rahman.

Early next year, SAHMAT will revisit another successful project from 1991, “Images and Words”, where 10 x10 inch canvas pieces were sent to artists, photographers, and writers, who had shared their idea of integrated India. Next year, to mark Safdar’s birth anniversary “a slightly larger format” of the project titled “Hum Sab Sahmat” will be launched.