“Modiji supports us. There can be nothing better than this. It signifies ‘ache din’ for the entire Jamdani weaving community,” legendary Jamdani weaver Biren Kumar Basak, who gifted a special weave to Prime Minister Narendra Modi at Padma Awards function, told indianexpress.com.

Acknowledging the gesture, Modi took to Twitter to express his gratitude for the gift — a sari that depicts him addressing the nation.

Shri Biren Kumar Basak belongs to Nadia in West Bengal. He is a reputed weaver, who depicts different aspects of Indian history and culture in his Sarees. During the interaction with the Padma Awardees, he presented something to me which I greatly cherish. pic.twitter.com/qPcf5CvtCA

“Shri Biren Kumar Basak belongs to Nadia in West Bengal. He is a reputed weaver, who depicts different aspects of Indian history and culture in his saris. During the interaction with the Padma Awardees, he presented something to me which I greatly cherish,” he tweeted. Basak, who started his journey with just Re 1, has now 5,000 weavers working under him.

“This recognition is not just for me, but for the entire community,” the 70-year-old Padma Shri awardee, who migrated from Bangladesh to India post Partition, told indianexpress.com over a call.

Sharing his ‘rags-to-riches story’, Basak said that he started his journey in the 1970s, and used to sell saris door-to-door with his brother in Kolkata.

“While the idea for the gift, that took four months to make, is mine but it was implemented by another weaver. The plan to gift the prime minister was in the pipeline ever since 2011-12,” Basak expressed. 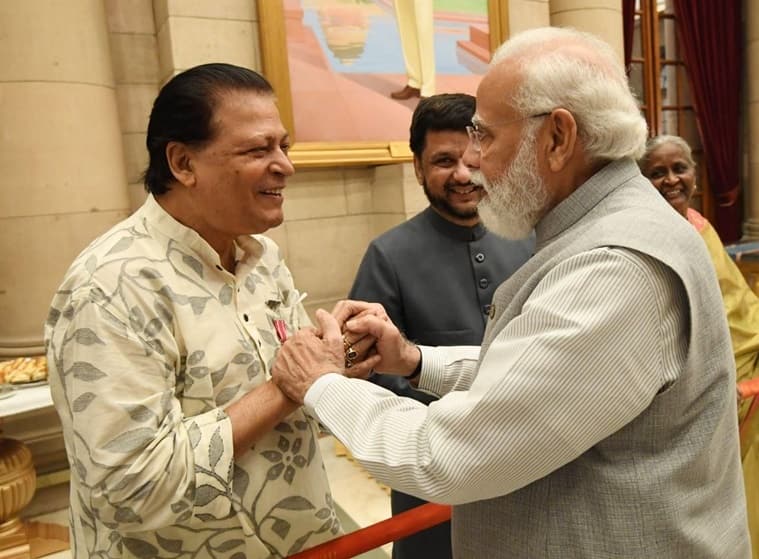 The master weaver has previously been conferred with the National Award in 2013 for his skill and exquisite craftsmanship. He also earned honorary doctorate from the UK-based World Record University for depicting the Ramayana on handloom woven sari that was also recognised by the Guinness Book for being the longest weaved sari.

Addressing concerns over the traditional weave’s future, his son, Abhinaba Basak, said: “The weaving art and the community both are doing very well. The idea is to train more and more people to achieve national and international recognition. There is no question of future generations not wanting to take up the art form which has existed in our family for over four generations,” he told indianexpress.com.