The craft, called “Noah’s Violin,” set sail accompanied by an escort of gondolas, and in no time a small flotilla of motorboats, water taxis and traditional flat-bottomed Venetian sandoli joined the violin as it glided from city hall, near the Rialto Bridge, to the ancient Customs House across from Piazza San Marco, about an hour’s ride 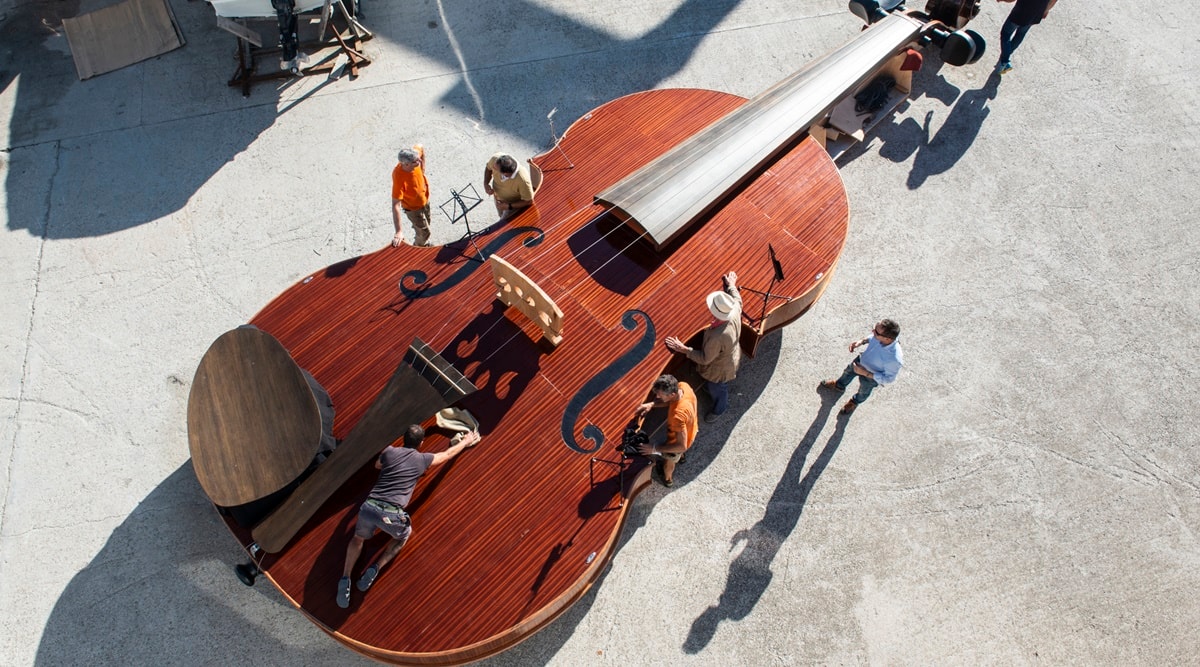 Noah's Violin is prepared for it's introduction on Venice, Italy's Grand Canal at the boatyard where it was built. (Susan Wright/The New York Times)

In its 1,600-odd years, any number of phantasmagorical vessels have floated down Venice’s Grand Canal, often during regattas or elaborate ceremonies dedicated to the sea. On Saturday morning, a decidedly unusual head-turner took a spin: a gigantic violin, carrying a string quartet playing Vivaldi’s “Four Seasons.”

The craft, called “Noah’s Violin,” set sail accompanied by an escort of gondolas, and in no time a small flotilla of motorboats, water taxis and traditional flat-bottomed Venetian sandoli joined the violin as it glided from city hall, near the Rialto Bridge, to the ancient Customs House across from Piazza San Marco, about an hour’s ride.

ALSO READ |Who can stop Venice from sinking?

The vessel is a faithful, large-scale replica of a real violin, made from about a dozen different kinds of wood, with nuts and bolts inside, as well as space for a motor. In addition to the artistry involved, it took a lot of tinkering and nautical expertise to make it seaworthy, its makers say.

“It was a novelty for us, too,” said Michele Pitteri, a member of the Consorzio Venezia Sviluppo, which financed the boat and built it along with Livio De Marchi, a Venetian artist, who conceived the idea during last year’s lockdown. 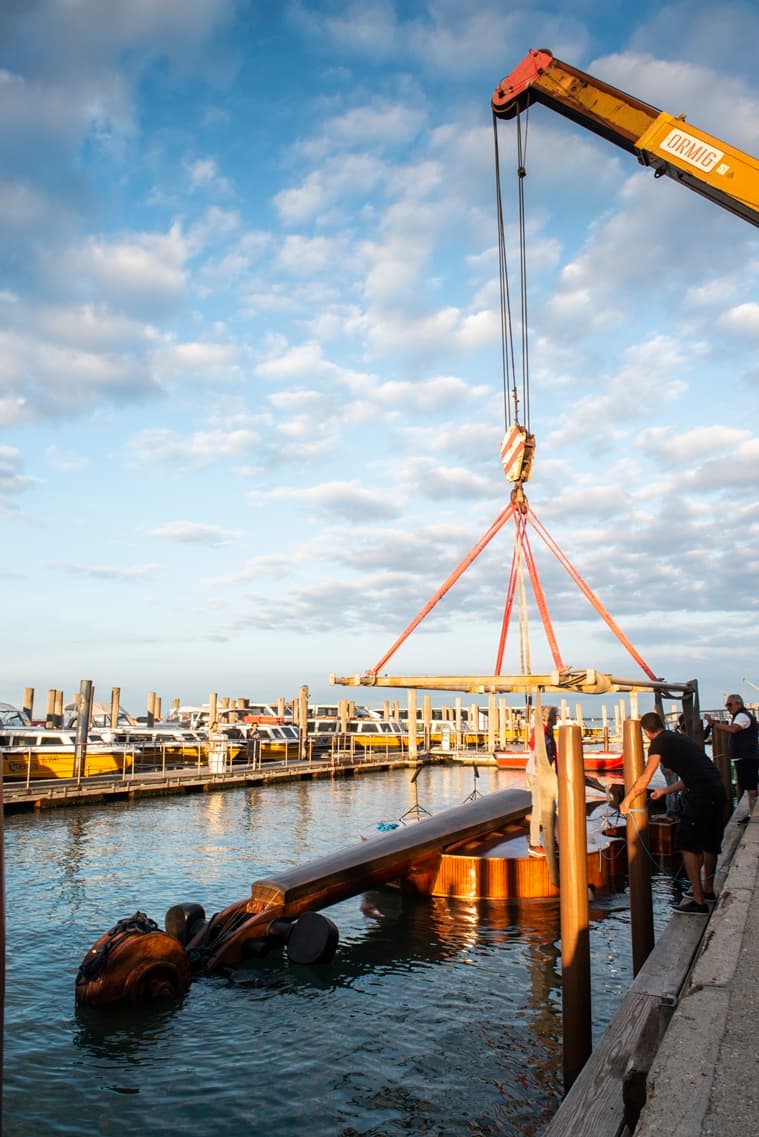 “The violin is a sign of Venice restarting” after the lockdown, De Marchi said Friday during an interview in his art-filled workshop off a narrow Venetian alley in the San Marco district.

De Marchi named the work “Noah’s Violin,” because like the ark, it was meant to bring a message of hope after a storm, in this case a message that promoted “art, culture and music,” he said.

It’s no coincidence that the journey down the Grand Canal was plotted to end beside the church of La Salute, Italian for health, in the Dorsoduro district, which was built as a votive offering to the Virgin Mary for deliverance from a plague that decimated the city in 1630.

ALSO READ |Beauty of history: Things to do when in Venice

Why a violin? De Marchi is a big fan of Vivaldi, who was a native of Venice and is venerated there. De Marchi added that he always regretted not having learned to play an instrument. The gigantic simulacrum was the next best thing, he said.

The boat was steered by a helmsman dressed in a black cape and wearing a black tricorn hat like those popular in the 18th century. “I wanted him to channel the spirit of Vivaldi,” De Marchi said.

Leone Zannovello, the president of the consortium, said that the project had revived enthusiasm at the shipyard on the island of Giudecca, where it was made, after the darkest days of the coronavirus pandemic. Companies and individuals who weren’t part of the group even offered to help out, he said. “It was something that united us even more,” he said. “We worked with our hearts.”

On Saturday, Zannovello and others followed the violin down the Grand Canal on sundry boats, palpably proud.

“Bravo Livio!” a voice cried out in praise of De Marchi.

As is often the case in Italy, the real hitches along with way were bureaucratic.

“We were told we needed a vehicle registration plate, but officials didn’t know how to classify it,” said Mario Bullo, a carpenter in the consortium. At first, they were issued the same plates given to rafts. “But the traffic police objected, saying that’s not a raft, it’s a violin,” he said with a shrug. In the end, city officials worked it out.

The Venice branch of the National Confederation of Artisans (CNA), which represents small business interests, helped with contacts and permits, said Roberto Paladini, the director of CNA Venice. 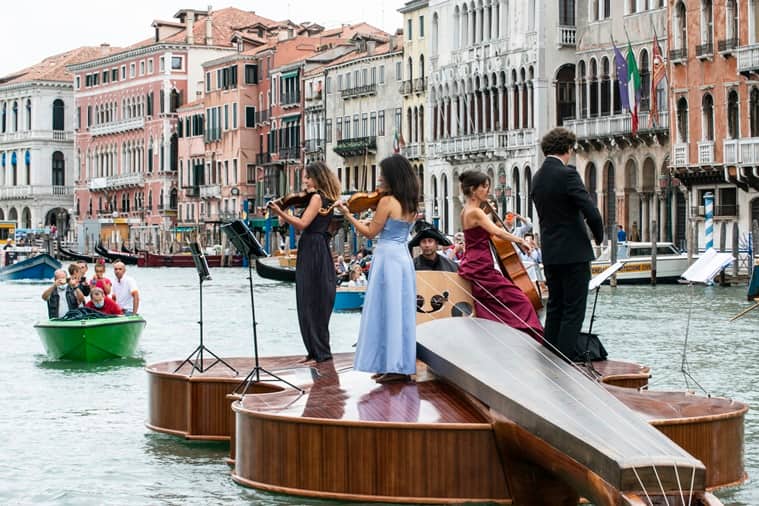 Financing initiatives like “Noah’s Violin” helped shine a light on artisans in a city where tourism has overtaken other activities, Paladini said, adding, “Supporting and giving visibility to artisans is the only way to keep Venice a living city.”

People gathered over the Ponte dell’Accademia and along the paved banks of the Grand Canal to watch the floating concert that included works by Bach and Schubert. Bemused travelers took photos from vaporettos, the large public transport boats.

When the violin finally approached the church of La Salute, De Marchi confessed, “I was a little nervous that something could happen.”

A brief ceremony attended by members of the consortium and their families and friends, followed. De Marchi made a speech, and commemorated the relatives of people who had worked on the violin who had died before seeing it finished. The Rev. Florio Tessari blessed the violin and said he hoped it would “travel the world as a message of hope.” There has been interest in the violin from businesses in Italy and a museum in China, De Marchi said. 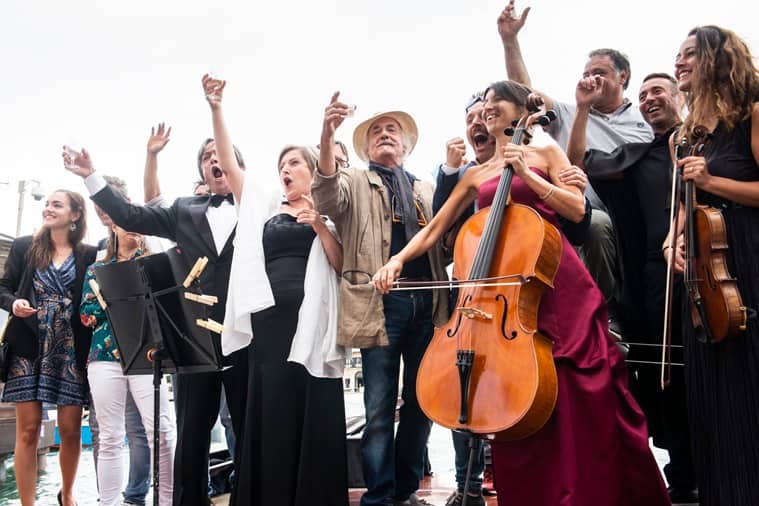 A Prosecco toast to Noah’s Violin, an enormous motorised floating violin, after its successful introduction to Venice, Italy, with a string quartet aboard that played Vivaldi’s ÒFour Seasons as the watercraft floated along the Grand Canal. (Susan Wright/The New York Times)

The musical entertainment continued there along with toasts and a singalong of sorts.

ALSO READ |Dolce and Gabbana show in Venice was a fashion extravaganza; check out the pics here

Zannovello, the consortium president, said he hoped the violin would serve to showcase Venetian crafts after a slow and difficult period. “I am convinced there will be a return,” he said.