Women’s wall in Kerala HIGHLIGHTS: Lakhs of women line up for ‘Vanitha Mathil’ across state

Women’s wall in Kerala HIGHLIGHTS: Marshalled by the Kerala government and a section of Hindu organisations the wall is being organised against the backdrop of the Supreme Court verdict on women's entry to the Sabarimala temple.

Women’s wall in Kerala HIGHLIGHTS: A human chain, composed entirely of women, from Kasaragod district in northern Kerala to Thiruvananthapuram in the south took shape. (Express photo by Nithin)

Lakhs of women in Kerala took a pledge to protect the renaissance value as they formed a 620-km “wall” from Thiruvananthapuram to the northern district of Kasaragod. Marshalled by the Kerala government and a section of Hindu organisations, the wall was organised against the backdrop of the Supreme Court verdict on Sabarimala, however, the content of the women’s pledge has no reference to the shrine. These Hindu organisations are among the ones that have supported the government’s stand on the entry of women of all ages into the temple. Read in Malayalam

The decision to stage the wall was taken earlier in December in a meeting of various Hindu organisations, which was convened by the CPI(M)-led government. Explaining the aim of forming a women’s wall, Chief Minister Pinarayi Vijayan Monday said, “The CPI(M) considered addressing women’s issues as part of the party’s class struggle. Such an initiative (women’s wall) is required to protect the renaissance tradition of the state.”

Women, who have agreed to take part in the event, will begin assembling by the side of the national highways across all 14 districts by the afternoon. The wall is likely to stand for about half an hour before dispersing.

A 620-km "human wall" from Thiruvananthapuram to the northern district of Kasaragod to be formed in Kerala today. Follow this space for LIVE Updates. Also Read in Malayalam

The wall was to save Kerala being 'dragged back into the era of darkness,' says Pinarayi Vijayan

Chief Minister Pinarayi  Vijayan had earlier expressed confidence that women, cutting across lines of caste and religion, would join the 'wall' to save Kerala from being "dragged back into the era of darkness." Health minister K K Shylaja led the 'Women's Wall' at Kasaragod and Karat was the last person at the end at Vellayambalam here. 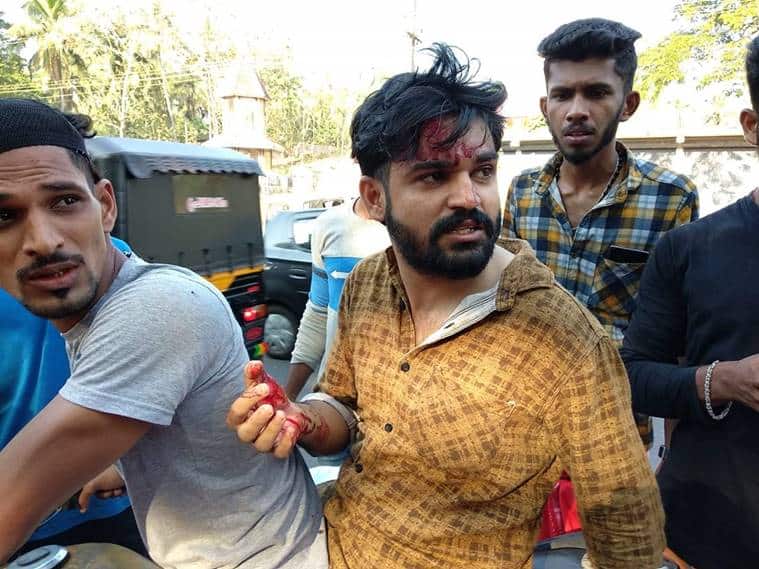 Meanwhile, reports come in from Bekal in Kasarkod district of stone pelting aimed at the women. 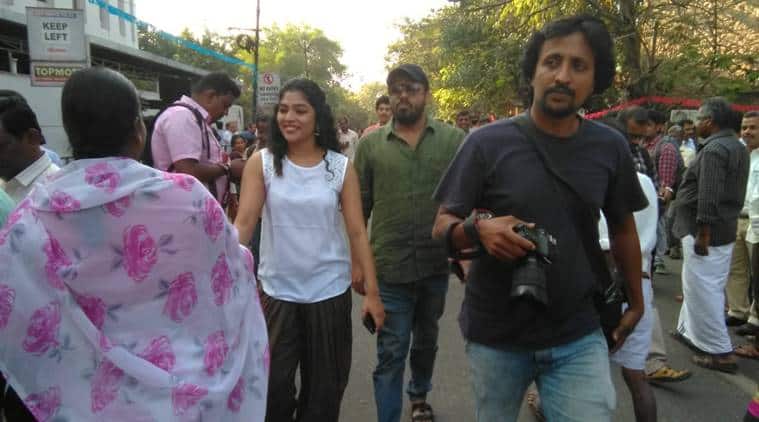 Malayalam actress Rima Kallingal in Pictures.  In a social media post, she said “Let us say hello to 2019 at the Vanitha Mathil event on Tuesday. Let us examine who we are as individuals, as human beings and as a society.”

View of the womens wall from iconic Kallayi Palam in Kozhikode

Women form a 620-km chain called ' Vanitha Mathil' across Kerala.  Here's a glimpse of  it from the iconic Kallayi Palam in Kozhikode.

Women should no longer be pushed into dark ages: Brinda Karat 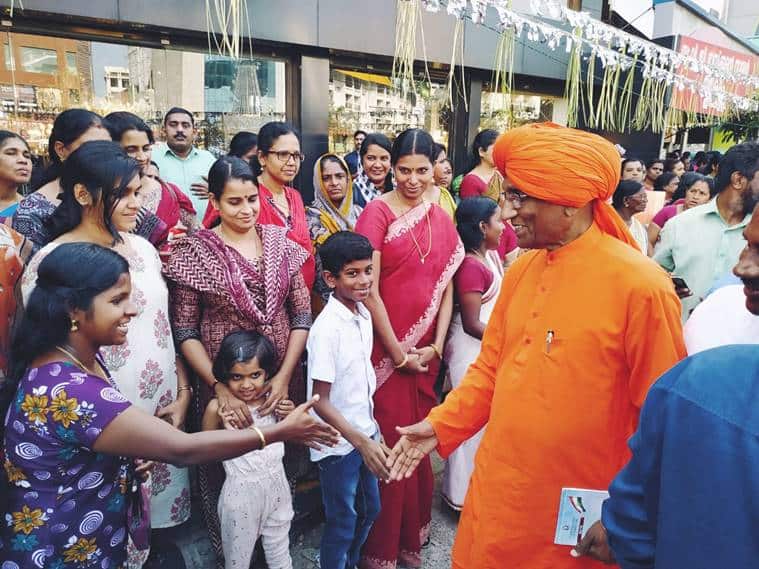 Women take oath as the begin to form chain across state 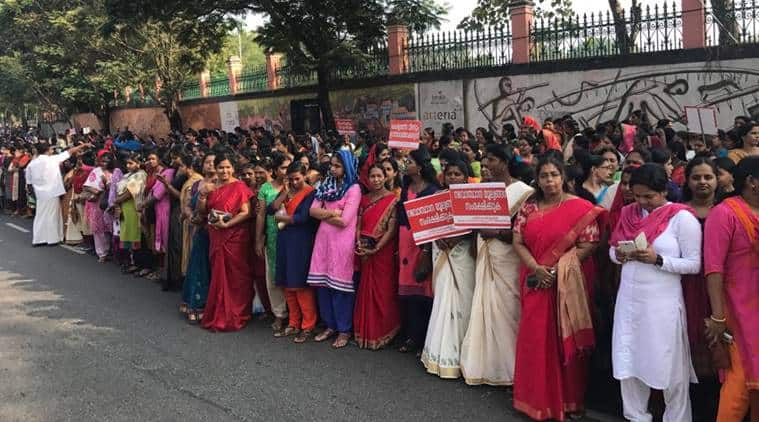 Women actors across Kerala will gather to support the Vanitha Mathil. Actresses like Rima Kaling, Parvathi, Nina Kurup, Mala Parvathy and Sajitha Madathil will be present during the programme.

Pinarayi Vijayan in Trivandrum to support of 'Vanitha Mathil' Over 176 renaissance organisations of Kerala will participate in Vanitha Mathil

Women all set to form the wall 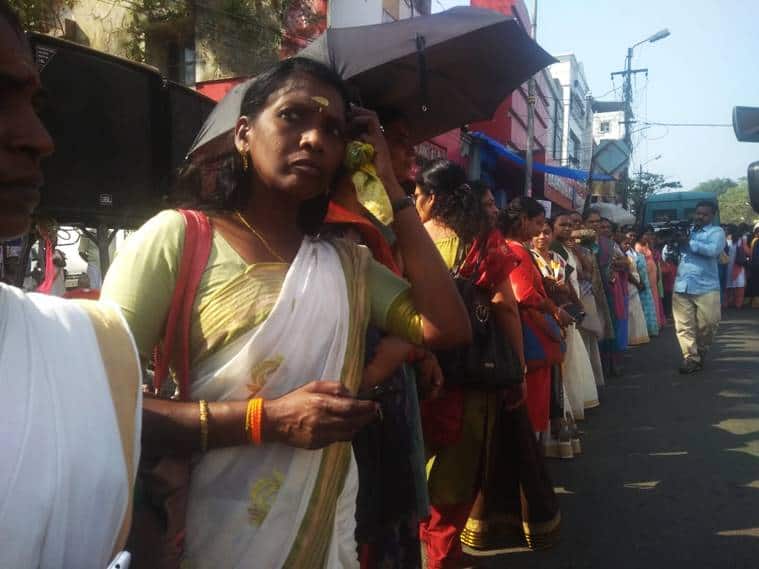 Women begin to form the wall in  Thrissur. (Express photo by Vignesh Krishnamoorthy)

Exactly at 3: 30 PM, the #WomensWall will be raised as part of a trial. Women have begun to assemble at Edappally, one of the busiest road junctions in Kochi @IndianExpress @IeMalayalam pic.twitter.com/HmxtMzgMqZ

Glimpse of preparations ahead of 'wall' formation 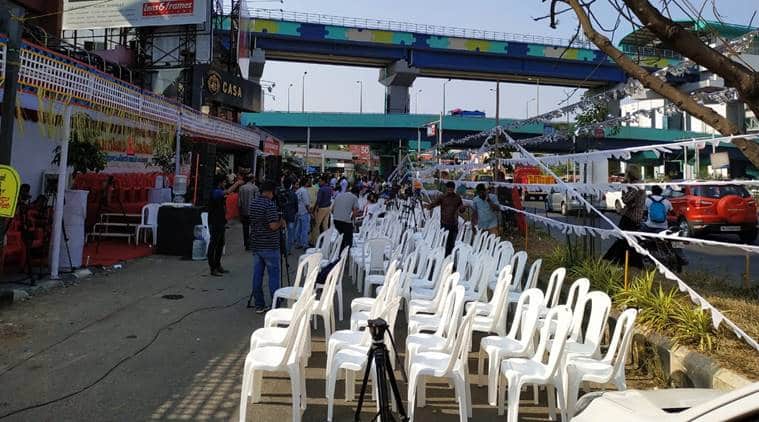 CPM leader Mohanan Mash reach Muthalakkulam ahead of the programme 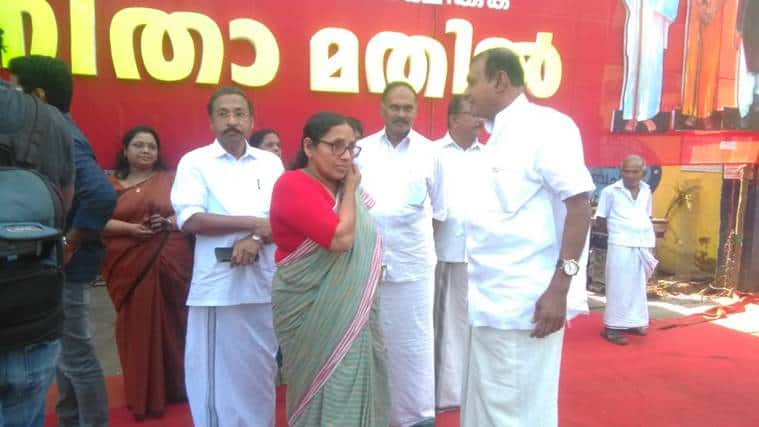 CPM leader Mohanan Mash and wife Lathika  reach Muthalakkulam in Kozhikode ahead of the programme. ( Express Photo by Kiran Gangadharan)

Clarifying that the event is aimed at demanding gender equality, CPM state secretary K Balakrishnan said, "Women's Wall isn't a referendum on Sabarimala verdict. Government fund is not being used for it. Those who support gender equality can join the women chain."

Kerala CM Pinarayi Vijayan to inaugurate Women Wall program in Trivandrum later today.K Balakrishnan (in pic),State Secy,CPM says,"Women Wall isn't a referendum on #Sabarimala verdict.Govt fund is not being used for it. Those who support gender equality can join the women chain." pic.twitter.com/mnRmqHZGwF

Women's wall is a wall against communalism: CPM state secretary

Kerala CPM secretary Kodiyeri Balakrishnan, defended the event saying, the women's wall is against communalism and the party has no rivalry against any community.

CPM state secretary @b_kodiyeri says the #WomensWall is a wall against communalism. He said the NSS should have participated in the formation of the wall, rather than join the company of the @RSSorg. He added the party has no rivalry with any community. @IndianExpress

Sabarimal row: NSS will face the Govt through Gandhian means

Speaking on the Sabarimala issue, NSS general secretary G Sukumaran Nair said, "The NSS is not a political organisation but NSS members are free to choose political ideologies. NSS will face the Govt through Gandhian means. We will go to any length of the legal spectrum to fight for the Sabarimala cause."

The Nair Service Society (NSS) that represents the upper-caste Nair community, has slammed the event and will give it a miss. Both the Congress-led UDF and the BJP-led NDA have opposed the women’s wall, terming it ‘communal.’

G Sukumaran Nair, general secretary of the Nair Service Society (NSS) said the 'vanitha mathil' or women's wall will turn Kerala into 'Devil's country' and that the LDF govt has employed double standards on the issue @IndianExpress pic.twitter.com/GQTC7k2MIm

Chief Minister Pinarayi Vijayan, Devaswom Minister Kadakampally Surendran and Finance Minister TM Thomas Isaac will take part in the event in Thiruvananthapuram. Health Minister KK Shylaja will be the starting point of the women’s wall in Kasaragod while Politburo member Brinda Karat will be the concluding point in Thiruvananthapuram. All ministers in the government will take part across different districts.

Meanwhile, Opposition parties said it would lead to communal polarisation in Kerala.  And the government's move to deploy women beneficiaries of various welfare schemes and state-run empowerment programmes has drawn flak from the Opposition.

Opposition leader Ramesh Chennithala had questioned the government over inviting only Hindu organisations, to which Vijayan had stated that organisations of minority communities were not called to prevent the BJP from using it against the government.

In response, Chennithala said, “CM has now admitted that the women’s wall is not a renaissance wall (and) instead is a communal one. It shows that the government is using Hindu fundamentalism to confront the same issue. Dividing society on religious lines is against the principles of the Constitution.”