With no job back home, migrants return to Surat

Govind Kori, 37, from Jaunpur in Uttar Pradesh had returned home on a Shramik Special train on May 24 after the dyeing and printing mill in Pandesara where he was employed shut down in March. 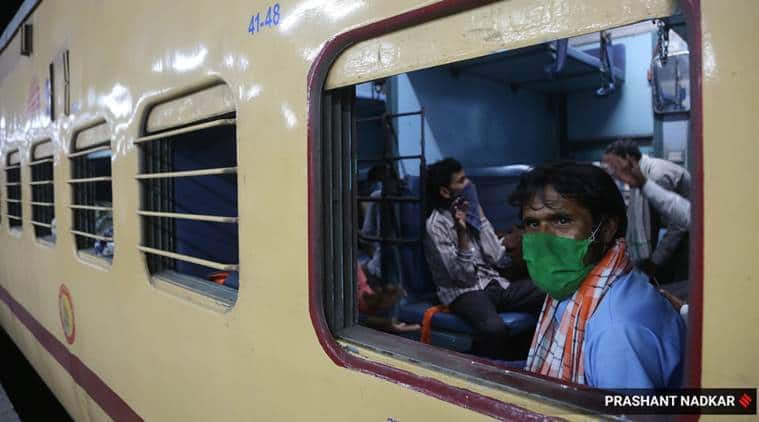 Around 6.45 pm on Thursday, the Tapti-Ganga Express train from Chhapra in Bihar chugged into the Surat railway platform. On board were nearly 1,200 people from various towns and villages of Bihar, Uttar Pradesh and Madhya Pradesh who had fled Surat over two month back for lack of work, money and food and the fear of an uncertain future due to the lockdown amid Covid-19 outbreak.

As the train dragged to a halt, the RPF and Government Railway Protection force personnel made all the passengers stand in queue, nearly two metres apart from each other, wear masks and then them move to desks where municipal officials stood holding pulse oximeter and thermal guns.

One by one the passengers were medically screened and those having android mobile phones were told to download SMC COVID tracker, the Surat Municipal Corporation’s mobile application to track coronavirus patients. The passengers were allowed to leave after the officials noted down their personal details.

Govind Kori, 37, from Jaunpur in Uttar Pradesh had returned home on a Shramik Special train on May 24 after the dyeing and printing mill in Pandesara where he was employed shut down in March.

“There are no job opportunities at our native place, so we decided to return to Surat. We left because of fear of the coronavirus. Our factory had shut down and there was no sign of it reopening in the next few days. Staying in Surat, paying the rent and other expenses had become difficult, so we had left. I have not been able to pay rent of my room (Rs 2,000 per month) since March due to financial crunch. Before leaving UP, I made a call to my landlord, and told him that I would pay the pending rents and would take the same room. It was only after I got the green light from him, I left my native place with my wife and children,” says Kori.

He adds that he doesn’t want the education of his children, Sakshi, 16, and Gaurav, 18 who are studying in classes 10 and 12 respectively in the Girija Shankar Mishra High School in Pandesara, to suffer.

The contractor who had hired Kori was also under pressure, and had called him to return to work, to make up for the shortage of labourers in the textile industry. “In Surat, I can earn more and save some. Due to shortage of labourers, I will get more salary now. I will also do overtime and earn more,” Kori adds.

An estimated 12 lakh migrant workers hailing from UP, Jharkhand, Uttarakhand, Bihar, Odisha, and Madhya Pradesh had left Surat during lockdown in 440 Shramik Special trains and private buses. Now after two months, some of those migrant labourers have started returning to Surat.

Manoj Kumar Nishad, who sold fruits on a cart in Simada area, was among those who came back to Surat from his village in Sultanpur, Uttar Pradesh, along with wife Sunita.

“We feel alive after spending two months at our native place. The last time I had been there was five years ago. My father and my elder brother do farming. However, the entire family cannot survive on the agriculture produce so we came back to Surat. I was earning good by selling fruits in Surat, but all my savings were spent during lockdown,” Manoj says.

Nishad will have to start from scratch, hire a handcart, buy fruits from wholesaler all with Rs 5,000 that he has brought back from his village. He says that he has cleared all his due rent, and his landlord has spared him the advance. So, now he will return to the same room where he live for 10 years before going home during the lockdown.

“My children are young so I have left them with their grandparents. When the situation becomes normal, I will bring them back to Surat and put them in a school,” says Manoj.

Ravi Nishad who got married a year ago has returned to Surat leaving behind his wife in Varanasi with his parents because he cannot afford to sustain the two of them. Ravi worked with a house painting contractor in Surat for three years nefore leaving for his hometown. Pre-lockdown, the couple stayed in an Economically Weaker Section quarter in Kosad, and left for UP on April 20 after lockdown was announced.

“I am the eldest of three children. My father does farming. I would have stayed back, but I did not get a job, so I decided to come back to Surat. I will work hard and earn enough money so that later I can bring her (wife) to Surat,” says Ravi.

For Rajkumar Tiwari, a textile factory worker, the priority was to put his children — Ashta, 9, and Ayush, 6 —to an English medium schools. There are no such school in his village in Sultanpur, UP. Tiwari’s both children are studying in Sun Flower English School in Surat.

“I got a call from the labour contractor in Surat and he told me to come back. I am sure that I will get weekly payment, and he has assured that he will provide ration to us. I have been in Surat for 15 years. I see a good future for my children here which drove me to come back,” Tiwari says.

Kamran Usmani, a textile dyeing and printing mill labour contractor, who visited various districts of UP to persuade migrant workers to return, admits to be under “immense pressure from the factory owners to supply labourers”. He says that mill owners are willing to pay higher wages to get their mills running.

“I had been to different districts in UP to bring back labourers to fill the shortage. We wish that the government start free train service from UP to Surat, so that labourers can come back. At present, only 30 per cent of dyeing and printing mills are functioning due to labour shortage. We are sure that by next month, more labourers will return to Surat,” says Usmani.