Why 10-quarter high farm growth of 4.6% raises some questions

According to the Agriculture Ministry's first advance estimates of production released on September 21, India's total kharif foodgrains output for 2022 was 149.92 million tonnes (mt), 3.9 per cent down from the previous year’s corresponding level of 156.04 mt. Agriculture would have grown 4.6 per cent in July-September only if the non-crop sub-sectors have done exceptionally well.

The National Statistical Office (NSO) has estimated agricultural growth for July-September 2022 at 4.6 per cent year-on-year against the economy’s other two production sectors, manufacturing and mining & quarrying, which contracted 4.3 per cent and 2.8 per cent, respectively, during the same quarter compared with July-September 2021.

According to the Agriculture Ministry’s first advance estimates of production released on September 21, India’s total kharif foodgrains output for 2022 was 149.92 million tonnes (mt), 3.9 per cent down from the previous year’s corresponding level of 156.04 mt. This was led by kharif cereals (down from 147.67 mt to 141.55 mt), and the production of pulses remaining stagnant at 8.37 mt. 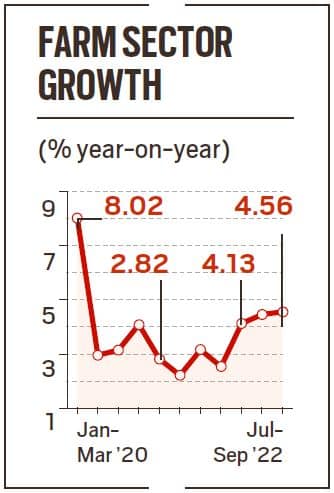 The general picture based on ground reports too suggested that deficient June monsoon rains, drought conditions in the Gangetic plain states (Uttar Pradesh, Bihar, Jharkhand and West Bengal) extending to August, and excess rainfall in September-October would impact overall kharif crop performance – though the prospects for the current rabi (winter-spring) season, whose production impact will be seen in the subsequent quarters, look bright as of now.

Agriculture would have grown 4.6 per cent in July-September only if the non-crop sub-sectors have done exceptionally well. About 55 per cent of India’s agriculture sector production is now accounted for by crops, with the balance coming from livestock (30 per cent), forestry and logging (8 per cent) and fishing and aquaculture (7 per cent).

But the evidence of buoyancy in non-crop farming activities isn’t very strong. Most dairies, for instance, reported sluggish milk procurement due to input cost pressures faced by farmers. Annual inflation in “fodder”, as per the official wholesale price index, averaged 25 per cent during July-September. The outbreak of the lumpy skin disease virus infecting cattle across many states too also have had some adverse impact on milk production. Cumulatively, it has forced the likes of Amul and Mother Dairy to resort to three rounds of price increases this year.