Weather HIGHLIGHTS: The Indian Meteorological Department has predicted heavy to very heavy rains and possible thunderstorm activity for the northwestern parts of India in the next 24 hours

People at Gateway of India in Mumbai on Monday. (Express Photo by Amit Chakravarty)

The Indian Metereological Department (IMD) has predicted heavy to very heavy rains and possible thunderstorm activity for the northwestern parts of India in the next 24 hours. The weather body also said the conditions are favourable for the advancement of Southwest monsoon. The Southwest Monsoon is progressing as per expectations over and across the states of Andhra Pradesh and Telangana, a scientist at the meteorological department was quoted as saying by ANI.

Meanwhile, incessant rains in Mumbai since Monday have brought the city to a standstill due to water-logging in many parts even as loss of lives and property have been reported from the city. The Santacruz observatory reportedly recorded a rainfall of 231.4 mm, for the first time this year. Kolkata also experienced heavy rains and waterlogging on Tuesday, with the Met department forecasting more rains in the state over the next two days.

Weather LIVE UPDATES: The IMD predicted heavy to very heavy rains and possible thunderstorm activity for the northwestern parts of India in the next 24 hours.

The Gorakhpur airport was closed and flights to Delhi were cancelled after heavy rains lashed the Uttar Pradesh city throwing normal life out of gear.
The programme of Chief Minister Yogi Adityanath, who was scheduled to return to Gorakhpur today after inspecting a rally venue of Prime Minister Narendra Modi in Maghar, was changed due to rains here.

Modi will address a public rally and lay the foundation stone of a research institute at Maghar tomorrow. Heavy rainfall since last night has caused water logging in several parts of Gorakhpur and mobile water pumps have been deployed in many localities, officials said. (PTI)

As many as flights diverted from Delhi due to bad weather

Six flights have been diverted from Delhi's Indira Gandhi International Airport (IGIA) due to sudden change in weather.

The National Capital Region today witnessed overcast skies almost throughout the day, followed by strong winds in the evening which kept the mercury in check, even as overnight rains led to increase in humidity levels. Six flights were diverted from Delhi due to inclement weather conditions as told by sources of Indira Gandhi International (IGI) Airport to PTI.

According to the Safdarjung observatory, the recording of which is considered the official figure for the city, Delhi received 3.4 mm of rains till 8.30 am, while areas under Palam, Lodhi Road and Ridge observatories recorded 0.6 mm, 7.7 mm and 2 mm rains respectively during the same period.

Waterlogging in Mumbai after heavy rains on Monday 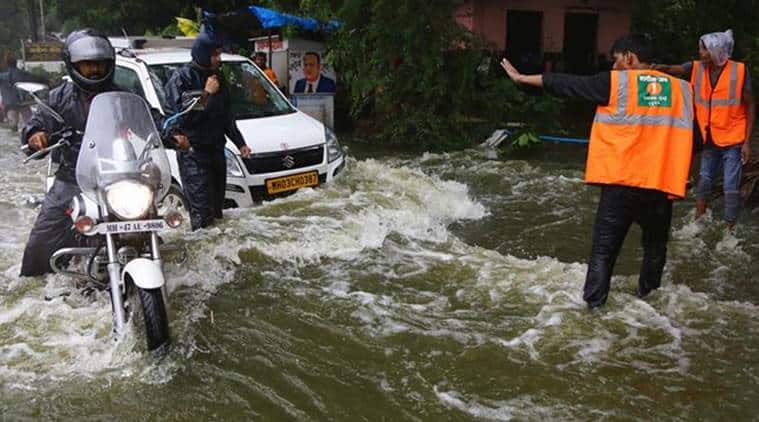 After incessant rains in Kolkata, several parts of the city like Behala, Kidderpore, E M Bypass and Mukundapur were waterlogged. Amherst Street and Vivekananda Road in North Kolkata were also waterlogged. The Met department forecasting more rains over south Bengal in the next two days. Read here

Reports of waterlogging from Bhubaneswar

Rains in Mumbai have claimed 10 lives, massive traffic snarls due to water logging

The IMD predicts heavy to very heavy rains for Mumbai. “Circulation over south Gujarat and adjoining north Konkan has moved inward in the north direction, which will cause a reduction in rainfall activity over north Konkan in next 24 hours,” said K S Hosalikar, Deputy Director-General, Western Region, IMD Mumbai.

On Monday, several parts of the city, like Chunabhatti, Wadala, Dadar, Malad, Kurla, Gamdevi, Santacruz-Chembur Link Road, were flooded, causing major traffic disruptions. Waterlogging was reported in some parts of the Eastern and Western Express Highways, arterial roads, and many low-lying areas of the city and suburbs. The water level receded after 5 pm. Read more

#TravelUpdate Due to bad weather (moderate thunderstorm )at Delhi, arrivals/departures from Delhi may be delayed. Please visit https://t.co/9eL33MOs9m for updated flight status.

Assam floods: Though the water level is down, the situation is still quite dangerous

Though the water level has come down, the situation is still quite dangerous: Central Water Commission official on overall flood situation in #Assam. 28 people have died due to floods in various parts of the state. Visuals of Brahmaputra river from Guwahati. pic.twitter.com/7gYnf6ZdHK

Due to heavy rains, Mumbai and Kolkata were waterlogged causing severe loss of property.