Weather forecast today, Cyclone Fani Today LIVE News Updates: Fishermen along the coasts of these southern states have been advised not to venture into the sea. Those who are in the deep sea areas are advised to return to the coast by Sunday, April 28.

A cloudy sky in Kochi as Kerala braces for cyclone Fani on Sunday. (Express Photo by Nandagopal Rajan)

Fishermen along the coasts of these southern states have been advised not to venture into sea. Those who are in the deep sea areas are advised to return to the coast by Sunday, April 28. A gale is predicted over Southwest Bay of Bengal and adjoining equatorial Indian Ocean with the wind speed ranging between 65-85 kmph.

Cyclonic storm  ‘Fani’ over the southeast Bay of Bengal

Cyclonic storm  ‘Fani’ over the southeast Bay of Bengal near latitude 8.2°N and longitude 87.0°E about 910 km southeast of Chennai (Tamil Nadu). It will intensify into a severe cyclonic storm in the next 12 hours. Then it will move northeastwards till May 1 evening and thereafter recurve north-northeastwards gradually. 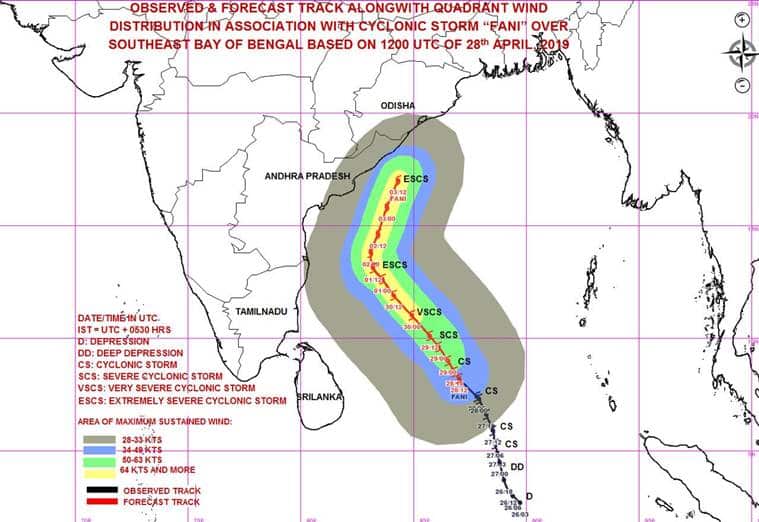 A Sravani, Meteorology Department, Hyderabad said Fani cyclonic storm is going to intensify from severe to very severe cyclonic storm in next 24 hours. Now it's moving northwestward and May 1 onwards, it will move northeastward, reported ANI.

Rain and thundershower with gusty winds to affect over multiple districts of Arunachal Pradesh during the next 12 hours, says Skymet Weather.

Cyclone ‘Fani’ is very likely to intensify into a “severe cyclonic storm” in the next 12 hours and further soar into a “very severe cyclonic storm” in the next 24 hours, the Cyclone Warning Division of the MeT department said on Sunday. In its 1 pm bulletin, the Cyclone Warning Division said ‘Fani’ currently lays over 745 kilometres east-southeast of Trincomalee (Sri Lanka), 1,050 kilometres southeast of Chennai (Tamil Nadu) and 1,230 kilometres south-southeast of Machilipatnam (Andhra Pradesh).

Southern peninsula division comprising all five states of the South India and the Union Territory of Puducherry, Goa and coastal Maharashtra, the rainfall deficiency recorded was 31 per cent, the IMD said. East and northeast India division recorded 23 per cent deficiency.  The Central India division is the only one to have recorded more five per cent rainfall than the normal. Pre-monsoon showers, thunderstorms and lightening have killed more than 50 people in Madhya Pradesh, Maharashtra, Gujarat and Rajasthan this month. (PTI)

Pre-monsoon rainfall from March to April, a phenomenon critical to agriculture in some parts of the country, has recorded 27 per cent deficiency, according to the India Meteorological Department (IMD). The IMD recorded 43.3 millimetres of rainfall across the country from March 1 to April 24 as against the normal precipitation of 59.6 millimetres. This was 27 per cent less of the Long Period Average (LPA). The highest deficiency of 38 per cent was recorded in the northwest India division of the IMD, which comprises states of Uttar Pradesh, Delhi, Punjab, Haryana, Jammu and Kashmir, Uttarakhand, Himachal Pradesh. (PTI)

Balachandran also stated that Fani will slowly change its direction after May 1.

S Balachandran, IMD Chennai: #Fani cyclonic storm will slowly change the direction after May 1 to the north and north eastward. It will not cross Tamil Nadu coast and south Andhra coast. https://t.co/ZgXL8fEX3G

Amid heat wave warning, rains to hit parts of Telangana

In a mixed weather forecast for Telangana, the Met department has issued heatwave warning for two days from Sunday in some parts while predicting moderate rain in isolated places in the state. In a respite from scorching heat with temperature hovering over 40 degree Celsius mark in the past few days, the city experienced cloudy sky Sunday, reports PTI.

According to the India Meteorological Department here, heat wave conditions are likely to prevail in some parts of Telangana Sunday and Monday. It also forecast that light to moderate rain or thunder showers were very likely to occur at isolated places in the state.

On Saturday, Adilabad sizzled with a maximum temperature of 45.3 degree Celsius, the highest in the state, followed by Nizamabad 44.5 degree Celsius while Hyderabad recorded 41 degree Celsius.

Mysuru, Bengaluru, Thiruvananthapuram, Kochi on rain alert for next 2 days

The parts of South Karnataka and Kerala have been experiencing light rains and thundershowers for the last few days. According to the data available with Skymet, during the last 24 hours, Kozhikode in Kerala has recorded 2 mm of rainfall, while traces of rain have been recorded in Gadag, Karnataka.

The reason for these activities can be attributed to the trough, which is extending from Central Madhya Pradesh up to North Kerala. In addition to this trough, a cyclonic circulation has formed over the coastal areas of South Karnataka and adjoining Arabian Sea. Both the systems are oscillating almost close to periphery, thereby giving rains.

As the systems will persist for some more time, rain and thundershowers will continue over few parts of south and coastal Karnataka and Kerala for the next 48 hours. Thus, we expect light to moderate rain and thundershowers, along with isolated moderate spell, accompanied with strong gusty winds over Mysore, Bengaluru, Mangaluru, Chitradurga, Chamarajanagar, Thiruvananthapuram, Kannur, Kozhikode and Kochi for next two days. This will commence today late afternoon or evening onwards.

The weatherman Sunday forecast mainly clear sky and strong surface winds in the city where the minimum temperature settled at 25.4 degrees Celsius, one notch above the season's average, reports PTI.

The maximum temperature is likely to be 41 degrees Celsius. The relative humidity in the morning was recorded at 36 per cent.

The Safdarjung observatory, the recording of which is considered the official figure for the city, registered a maximum temperature of 40.7 degrees Celsius on Saturday while the minimum was recorded at 25.4 degrees Celsius.

The cyclonic storm ‘FANI’ (pronounced as ‘FONI’) over southeast Bay of Bengal & neighbourhood moved north-northwestwards with a speed of about 13 kmph in the early hours of April 28 and lay centred at 0530 hrs IST of 28th April, 2019 near latitude 7.3°N and longitude 87.9°E over southeast Bay of Bengal & neighbourhood, about 745 km east-southeast of Trincomalee (Sri Lanka), 1050 km southeast of Chennai (Tamil Nadu) and 1230 km south-southeast of Machilipatnam (Andhra Pradesh).

Cyclone Fani to intensify into a severe cyclone storm by afternoon

Cyclonic storm Fani is now all set to become powerful as it is expected to intensify into a severe cyclonic storm by Sunday afternoon.

As predicted by Skymet Weather, the Cyclonic Storm #Fani is now all set to become more powerful as we can expect it to intensify into a Severe Cyclonic Storm by Sunday afternoon. #CycloneFani #Cyclone #TamilNadu https://t.co/2Gt9s0ry3k

Sea condition will be rough from April 29, fishermen advised to not venture into sea

Sea condition will be rough to very rough from April 29. Fishermen are advised not to venture into sea from April 28. Those at sea are advised to return to port immediately, said Duty Officer, Cyclone Warning Centre, Vishakhapatnam.

Temperatures soar in Gujarat, heat wave to continue over next 2 days

Heat wave in parts of Gujarat will continue over the next two days, IMD has said. The maximum temperature in Ahmedabad touched 43.6 degree Celsius, 2.3 degrees above normal yesterday, and is very likely to touch 24 degree Celsius in the coming days, reports PTI.

The heat, though tolerable, could cause "moderate health concern for vulnerable people, that is, infants, elderly, and people with chronic diseases", the Met department said.

The meteorological centre in Bhubaneswar, Odisha has issued heat wave warning in nine districts of the state as temperatures soared above 40 degrees in at least 14 places.

Meanwhile, temperatures in Delhi and Central India are soaring

- The Deep Depression over Southeast Bay of Bengal has intensified into a Cyclonic Storm Fani.
- Temperatures over most parts of Northwest plains including Delhi and Central India are soaring.
Wanna know more about today's weather? https://t.co/2lOskplpUK

IMD issues forecast track and intensity of the storm
Cloudy sky in Kochi, expected rainfall at some places in Kerala

The India Meteorological Department (IMD) had on Friday issued a cyclone warning for coastal Puducherry, Kerala, Tamil Nadu and Andhra Pradesh, saying the depression in the east equatorial Indian Ocean and adjoining Bay of Bengal was likely to intensify into a deep depression in the next 24 hours and a cyclonic storm in the subsequent 12 hours. It could turn into a severe cyclonic storm by the time it reaches south Andhra Pradesh coast on April 30, it said. A red alert has been issued in Tamil Nadu and Puducherry, where the cyclone is expected to hit on April 30, triggering heavy rainfall.

Meanwhile, a strong heat wave, with temperatures soaring up to 46 degrees Celsius, is likely to continue in central India over the next four days.