Weather forecast today, April 26, 201: IMD has warned that Cyclone Fani could cross the north Tamil Nadu coast on April 30. In light of this, it has issued a red alert for areas in and around coastal Tamil Nadu and Puducherry.

Weather forecast today, April 26, 2019: Puducherry is busy bracing itself up after the India Meteorological Department issued an alert of Cyclone Fani. The union territory is expected to get heavy rain during the next few days due to a low-pressure area over Bay of Bengal which could transform into a cyclone on April 30, said the IMD.

Territorial Chief Minister V Narayanasamy held discussions with officials of various departments, including Revenue and Disaster Management, along with his ministerial colleagues, after the sounding of the alert. “Puducherry is bracing itself up after the IMD issued the alert,” the Chief Minister told reporters after the meeting.

However, the depression over east equatorial Indian Ocean and adjoining the southeast Bay of Bengal moved northwestwards with a speed of about 05 kmph during the day and laid centred near 1060 km east southeast of Trincomalee (Sri Lanka), 1410 km southeast of Chennai and 1690 km south­southeast of Machilipatnam at 5.30pm. It is likely to intensify further into a deep depression during the next 12 hours and into a cyclonic storm during the subsequent 12 hours. After this, It is expected to move northwestwards off Srilanka coast during next 96 hours and reach near north Tamilnadu and south Andhra Pradesh coasts on April 30 evening.

Weather forecast today, April 26, 2019: Here are highlights of the weather in Delhi, Mumbai, Bengaluru, Kolkata, Chennai and other cities across India.

Fishermen advised not to venture into sea due to depression

Fishermen in Andhra Pradesh have been warned not to venture into the sea from April 27 in view of the depression prevailing in the sea. An official release from The Andhra Pradesh Weather Forecasting and Early Warning Research Center (AWARE) AWARE, a division of Real-Time Governance Society, said deep-sea fishing has to be completely avoided as the sea is predicted to be rough with high tides and high-speed winds. Fishermen who are already in the sea have been advised to return to the shore by April 28. READ MORE HERE

As a precautionary measure, NDMA advises people to keep all documents and valuables plastic containers.

The Meteorological Department (Met) has issued a fresh 'yellow weather' warning for thunderstorm in several parts of Himachal Pradesh and gusty winds at isolated places on April 30, an official said Friday. Rainfall is likely in several parts of the state on April 26 and again from April 30 to May 2, the Shimla Met Centre said.  Issuing the yellow warning for thunderstorm on April 30, the Met said gusty winds were likely at isolated places in the plains and the low and middle hills. (PTI)

Puducherry braces itself up after cyclone alert

Puducherry is expected to get heavy rain during the next few days due to a low-pressure area over Bay of Bengal which could transform into a cyclone Fani. Territorial Chief Minister V Narayanasamy held discussions with officials of various departments, including Revenue and Disaster Management, along with his ministerial colleagues, after the sounding of the alert.

The India Meteorological Department (IMD) issued the alert for Tamil Nadu and Puducherry that a cyclone would hit the coastal areas on April 30 triggering heavy rainfall during the subsequent days.

"Puducherry is bracing itself up after the IMD issued the alert," the Chief Minister told reporters after the meeting. (PTI)

On Saturday, Mumbai's maximum temperature may rise to 38 degrees Celsius

According to Mahesh Palawat, vice president, meteorology and climate change at Skymet Weather, hot winds from northeast direction are expected to blow over Mumbai and adjoining areas.

Hot winds from North East direction are expected to blow over #Mumbai and adjoining areas. On April 27, #Maximum of Mumbai may increase to 38 degree. Hot and sultry weather will continue for at least next two days. #MumbaiRains #Mumbaiweather @SkymetWeather

NDMA releases a video suggesting precautionary measures to be taken before a cyclone.<

Mumbai is expected to see no further change in temperature at least for the next three days. According to the IMD,  the city will have mainly clear skies becoming partly cloudy towards evening or night.

Thunderstorm accompanied with gusty winds (with speed reaching 30-40 kmph) and lightning is likely at isolated places , and very likely over Sub-Himalayan West Bengal and Sikkim and Assam and Meghalaya, the IMD said in its warning today.

Delhiites woke up to a warm Friday morning with the minimum temperature settling at 24.2 degrees Celsius, normal for this time of the year. Humidity was recorded at 53 per cent at 8.30 AM.

The Met office has forecast clear skies during the day ahead along with strong surface winds.  "The maximum temperature is likely to hover around 42 degrees, " the weatherman said.

Cyclones explained: How are they named

Tropical cyclones passing over the northern part of the Indian Ocean are named by eight countries in the region, namely India, Pakistan, Bangladesh, Sri Lanka, Maldives, Myanmar, Oman and Thailand. The process only began in 2004, fours years after World Meteorological Organization agreed in principle to allow them to name cyclones originating in the Bay of Bengal and Arabian Sea.

As heatwave conditions persist across states including  Madhya Pradesh and Rajasthan, NDMA offers heatwave hacks and 'dumpy's tour to Rajasthan'.

The India Meteorological Department station, based in Thiruvananthapuram, issued warnings for fishermen and the general public about a possible cyclonic storm in the next few days heading towards the coast of Tamil Nadu.

Several districts of Kerala have been seeing, over the past week, thundershowers accompanied by gusty winds towards the later part of the day. The rain has been attributed to a confluence zone passing through Kerala and Tamil Nadu with moisture available from the Arabian Sea and the Bay of Bengal, Skymet Weather reported.

A cyclonic storm is likely to be formed near the Tamil Nadu coast on April 30. The NDMA suggests some Do's and Don'ts

Well marked Low-pressure system over Equatorial Indian Ocean and adjoining southeast Bay of Bengal is very likely to intensify into a cyclone, the IMD notification read. It is very likely to move northwestwards along and off east coast of Srilanka near north Tamilnadu coast on 30th April 2019. 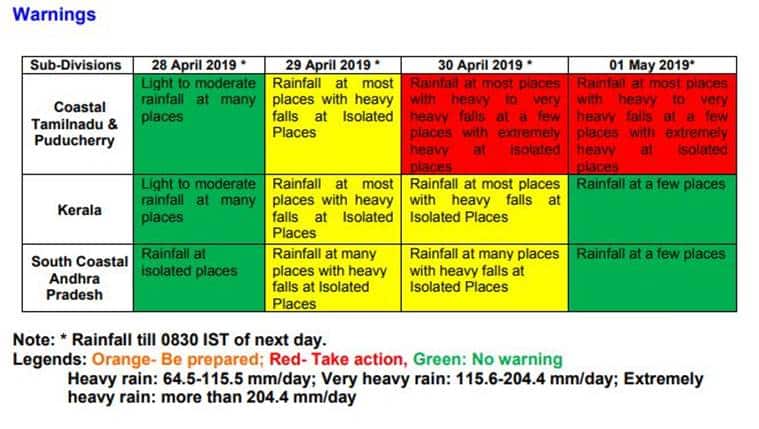 On Friday, Delhiites woke up to a warm Friday morning with the minimum temperature settling at 24.2 degrees Celsius, normal for this time of the year. In the morning itself, the weathermen warned that Cyclone Fani could cross the north Tamil Nadu coast on April 30. In light of this, the weather department issued a red alert (the highest alert for rainfall warning) for April 30 (Tuesday) and May 1 (Wednesday) for areas in and around coastal Tamil Nadu and Puducherry. The IMD bulletin also cautioned fishermen against venturing into sea as squally winds are predicted in the region.

The IMD forecast light to moderate rainfall at many places in coastal Tamil Nadu, Puducherry and Kerala on Sunday (April 28) and said rain was likely at isolated places in South coastal Andhra Pradesh. However, it forecast "rainfall at most places with heavy to very heavy falls at a few places with extremely heavy at isolated places," in coastal Tamil Nadu and Puducherry on April 30 and May 1.

It said on Friday, squally wind speed reaching 40-50 kmph gusting to 60 kmph was likely over Equatorial Indian Ocean and adjoining southwest Bay of Bengal. "Squally weather very likely over south Andaman Sea. Fishermen are advised not to venture into these areas," it added.

Wind speed would touch 90-100 kmph gusting to 115 kmph along and off north Tamil Nadu and Puducherry and adjoining south Andhra Pradesh districts coasts from the afternoon of April 30, it added.

Also read | How are cyclones named?

Meanwhile, Delhi recorded its hottest day of the season so far on Thursday at 43.2 degrees Celsius even as the skies turned partly cloudy towards the afternoon. The partly cloudy towards the afternoon and evening hours offered little relief from the sweltering heat, with the Weather Department ruling out any possibility of change in the conditions over the next two to three days.