Weather forecast Today Highlights: In J&K, the air-traffic to and fro Kashmir was restored on Saturday after remaining suspended for seven consecutive days due to poor visibility caused by heavy fog and snowfall in the valley.

Beautiful view of the ridge after fresh snowfall in Shimla on Saturday. (Express Photo by Pradeep Kumar)

Weather forecast Today Highlights: Famous tourist destinations in Himachal Pradesh, including Shimla, Manali, Dalhousie and Kufri, witnessed snowfall overnight which led to the mercury dropping to sub-zero levels on Saturday, PTI reported. Dalhousie received 60 cm of snow, between Friday 5.30 pm and Saturday 8.30 am, the highest in the state. It was followed by Kufri (20 cm), Shimla (13 cm) and Manali (10 cm), Shimla Meteorological Centre director Manmohan Singh was quoted as saying by the news agency. In another news, as many as 170 students who were stranded amid heavy snowfall near Kufri in Himachal Pradesh’s Shimla were rescued early on Saturday.

Meanwhile, chopper helicopter and ropeway service at the famous cave shrine of Mata Vaishno Devi in Reasi district of Jammu and Kashmir remained suspended for the second day on Saturday due to inclement weather. However, the pilgrimage is going on smoothly despite heavy snowfall and all necessary arrangements have been put in place to facilitate the devotees who are thronging the cave shrine atop Trikuta hills from across the country, Chief Executive Officer of Shri Mata Vaishno Devi Shrine Board (SMVDSB) Ramesh Kumar said.

In J&K, the air-traffic to and fro Kashmir was restored on Saturday after remaining suspended for seven consecutive days due to poor visibility caused by heavy fog and snowfall in the valley, officials said.

According to the Indian Meteorological Department (IMD), weather in Delhi today will remain cloudy.

Avalanche feared in higher reaches of Himachal, people asked to be cautious

Fearing avalanche and landslides following recent snowfall and heavy rains in Himachal Pradesh, people and tourists have been asked to remain cautious, a senior official said. People have been advised not to go towards avalanche-prone areas in Pangi, Bharmour, Teesa and Salooni of Chamba district, Chamba Deputy Commissioner Vivek Bhatia said. The DC also advised people to not to go towards landslide-prone areas to avoid any untoward incident. Bhatia said PWD men and machinery have been working for opening roads for traffic which were blocked after recent snowfall and rain. Efforts were also on to restore power supply in the areas where it had been affected due to recent bad weather, he added. PTI

Flight operations resume at Srinagar airport after week-long disruption due to fog, snow

The air-traffic to and fro Kashmir was restored on Saturday after remaining suspended for seven consecutive days due to poor visibility caused by heavy fog and snowfall in the valley, officials said. "The flight operations resumed this (Saturday) afternoon after seven days,” an official of the Airports Authority of India (AAI) said. He said a SpiceJet flight landed at the Srinagar airport around 12:15 pm and then took off around 1 pm, marking the resumption of the flight operations. A total of 14 flights operated from the airport after noon, the official were quoted as saying by PTI.

However, 14 flights were cancelled in the morning due to poor visibility and the snow clearance operation at the runway, he added. On December 6, several flights were cancelled due to bad weather, while no flight operations took place from December 7 to 13. The visibility at the airport, due to heavy fog, was less than 100 metres and such conditions were not suitable for flight operations.

Min temp above normal at most places in Punjab, Haryana

The minimum temperature stayed above normal at most places in Punjab and Haryana on Saturday, a meteorological department official said. Chandigarh, the common capital of the two states, recorded a minimum of 10.3 degrees Celsius, he said. In Haryana, the minimum temperatures recorded in Ambala, Karnal and Bhiwani were above normal at 10.1, 9.8 and 7.9 degrees Celsius respectively, the official said.

HP: 170 students among others rescued after being stranded in heavy snow near Kufri

As many as 170 students who were stranded amid heavy snowfall near Kufri in Himachal Pradesh's Shimla were rescued early on Saturday, police said. The 90 students from Maharashtra and 80 students from Rajasthan were on a tourist trip to the state but got stuck in snowfall near Kufri on Friday evening, Shimla Superintendent of Police Omapati Jamwal said. The bus carrying the students from Maharashtra skidded at Fagu near Kufri around 8 pm while on their way to Manali that left them stranded in snowfall, the SP said. Dhalli SHO Rajkumar and his team rescued and took them to a safer place at a nearby resort where they are staying for now, the SP added. While the SHO-headed team was coming back towards Hassan Valley after clearing Charrabara-Kufri section of the road in which 300 vehicles were stranded, the team found more than 80 light motor vehicles and two tourist buses stuck in snow accumulated on the road, Jamwal said. PTI

An earthquake of magnitude 4.4 on the Richter scale hit Chamoli district in Uttarakhand Friday, ANI quoted IMD officials as saying.

Normal life disrupted in Srinagar due to heavy snow

After heavy rains on Thursday, the residents of Srinagar woke up to a thick layer of snow, third this season, when it was still continuing. The city had recorded around five inches of snow till Friday afternoon. The snowfall threw life out of gear as the day temperature in the city plummeted several degrees, while the night temperature also marked a dip to settle at minus 1 degree Celsius, which is, however, normal during this part of the season, the officials said. They said the snowfall was widespread in Kashmir with the famous ski resort of Gulmarg in north Kashmir and Pahalgam hill resort in south Kashmir recording over two feet of fresh snow.

The snowfall forced the closure of the 270-km Jammu-Srinagar national highway for the second day on Friday. The highway was closed for traffic Thursday evening after heavy snowfall around the Jawahar Tunnel, the gateway to the Kashmir Valley, the officials said, adding over three feet of snow had accumulated on the ground at the tunnel towards the Kashmir side till Friday afternoon when it was still snowing. They said efforts are on to clear the highway for traffic, but operations are being hampered by continuous heavy snowfall. (PTI)

The famous Vaishno Devi shrine atop Trikuta hills experienced the season's first snowfall as moderate to heavy snow and rains lashed wide parts of Jammu and Kashmir and Ladakh for the second consecutive day on Friday disrupting normal life, officials said. Snowfall ranging from five inches to over three feet has accumulated at various places, especially in Kashmir, which remained cut-off from the rest of the country following the closure of the Jammu-Srinagar national highway for the second day and cancellation of all flights to and fro the Srinagar airport for the seventh day, they were quoted as saying by PTI.

"As expected widespread moderate to heavy snowfall occurred in most parts of Jammu, Kashmir and Ladakh and is still continuing. The present condition is likely to prevail for the next 12 to 24 hours," Director, Meteorological Department, Sonam Lotus said.

J&K: Here are some more pictures of fresh snowfall in Srinagar A western disturbance has triggered rain in several areas of Rajasthan where Ganganagar recorded the maximum rainfall of 15.8 mm, the Meteorological department here said on Friday. The state is likely to witness a thick fog on Saturday and Sunday.  The state was Severe hailstorm hit Nagaur in Rajasthan yesterday. On Thursday, Delhi's Safdarjung Observatory recorded 33.5 mm of rain in the 24 hours ending 8.30 am Thursday and Palam Observatory in Delhi recorded 40.2 mm

Delhi: Water-logging at an underpass in Pul Pehlad Pur, following overnight rainfall in the city. pic.twitter.com/Ph9hM15xp1

Minimum temperatures in Punjab and Haryana hovered above normal limits for the second consecutive day on Friday, even as several parts of the two states received light to moderate rains. Punjab and Haryana's joint capital Chandigarh, which received rains for the second consecutive day, recorded a low of 13.1 degrees Celsius, a Meteorological Department official said.

Cold weather conditions are expected to remain largely absent from most parts of Maharashtra during the rest of December. For the second consecutive month this season, winter-like conditions have eluded the state, which is experiencing prolonged warm days and nights, said officials of the India Meteorological Department (IMD). The minimum temperatures in Pune and its neighbouring areas have, so far, hovered between 17 degrees Celsius and 19 degrees Celsius since the onset of winter, making it a relatively warm winter season for Maharashtra. Read More

Heavy rain and thunderstorms is likely over Punjab, Haryana, Delhi and west Uttar Pradesh on Friday. The Western Disturbance will move away in the eastern direction and weaken on Saturday.

Fresh snowfall was received in parts of Himachal Pradesh.  National Highway 5 via Kurfi and Narkand was blocked today. In Uttarakhand's Chaubatia in Almora district, snowfall warning was issued by the weather department.  See more pictures At 18.7 C, Chandigarh gets coldest day so far this year

Chandigarh Thursday recorded the coldest day of this winter season as the day temperature slipped 4 degrees Celsius below normal after a light and intermittent drizzle in the city. Officials of the MeT department said no major change in temperature is expected on Friday as the prediction for a light rainfall will continue.  Read more

Hello and welcome to our weather LIVE blog.  Cold wave grips North India, windy spell likely to continue in Delhi. Follow this space for the latest update on weather. 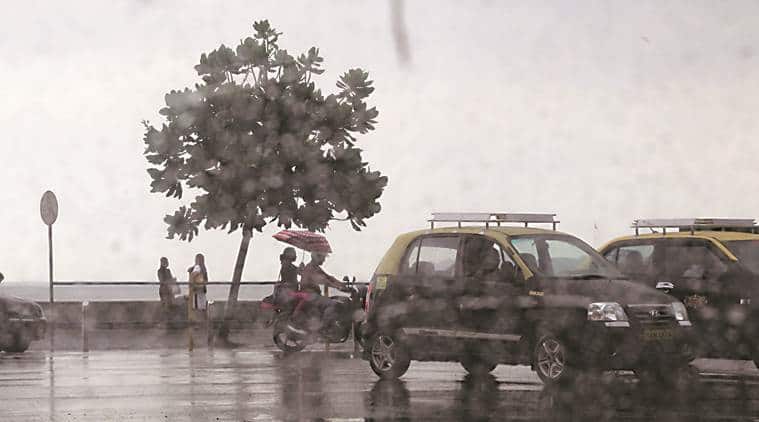 Under their influence, widespread rainfall with isolated heavy rainfall/snow accompanied by thunderstorm/hailstorm is very likely over the Western Himalayan region during the next 24 hours.