Water conservation: How Bundelkhand is keeping drought at a distance by recharging wells

Encouraged by Banda’s district administration, which has taken on the region’s persistent droughts and paucity of rain on a war footing, Gureh’s villagers have got together to clean all the wells. Men have been hired to rappel down the stone walls to remove silt and debris, and the results are encouraging. 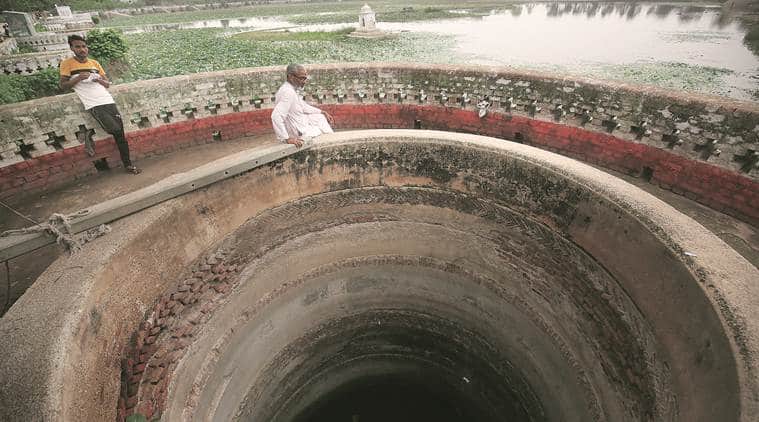 Jai Sagar pond in Bundelkhand is one of the seven interconnected ponds that is being replenished. (Express Photo by Praveen Khanna)

Smack in the middle of Gureh village in Bundelkhand’s Banda district lies an imposing ancient well. The seven-and-a-half thousand villagers talk about the well with pride. It has been there since “the time of the kings” they say.

Villagers such as 70-year old Chhedi Lal Tewari, whose family has lived in Gureh for generations, fondly recall the past when this well, the deepest among the 25-odd wells in the village, would fill up almost two-thirds during the monsoons and not just provide water for drinking and bathing but also for irrigating the farms. But in recent years, thanks to more erratic rains and siltation, the water level in the well steadily fell until it dried up completely last year, rues Ram Bahadur, the 50-year old village chief. Other wells, which were not as deep, suffered the same fate as well. Over the past month, however, Gureh’s villagers are turning things around.

Encouraged by Banda’s district administration, which has taken on the region’s persistent droughts and paucity of rain on a war footing, Gureh’s villagers have got together to clean all the wells. Men have been hired to rappel down the stone walls to remove silt and debris, and the results are encouraging.

Why India needs to conserve water

In India, water availability per person has been falling at an alarming rate. In 1950, it stood at 5,100 cubic metres. Today it is just 1,400 cubic metres, and in the coming years, it is likely to go down to 1,000 cubic metres. Part of the problem is our inability to use rainwater. India receives 4,000 BCM (Billion Cubic Metres) of annual precipitation, but the holding capacity of the 5,400 reservoirs across the country is less than 300 BCM. If India has to arrest the slide in water availability, it urgently needs to find ways to not only conserve more water but also improve the efficiency of its use.

“We have to complete the cleaning still, but we can already see the water coming back,” says Bahadur. Egged on by district officials, villagers also perform “kuan puja” (worshipping the wells) every evening to raise awareness and ensure the wells do not go into disrepair again. Apart from cleaning the wells, the villagers have also trained their attention on three large ponds flanking the acres of farmland. Gureh’s largest existing pond has been deepened by 1.5 meters. Another pond that had all but disappeared is also being revived and the third pond has been freshly constructed under the supervision of the village elders. The excess soil dug out from these ponds has been given to the labourers so that they could repair their homes.

Gureh’s response to its growing water crisis is part of a larger effort, involving both citizens and the government, in Bundelkhand, a region that stretches over 70,000 sq km across two of India’s biggest states — Uttar Pradesh and Madhya Pradesh. Over the past 15 years, water availability in the already drought-prone Bundelkhand has become critical. Both the number of days when the region received rainfall — 52 days — as well as the total quantum of rainfall — 800mm to 900 mm — have halved over the past decade-and-a-half.

What made matters worse was the shift away from the traditional crops such as pulses, chickpea and bajra suited for this region. With water bodies drying up, Bundelkhand started relying entirely on hand-pumps and tube-wells for their water supply. This resulted in a sharp depletion of groundwater resources, further affecting crops and livelihood.

Not surprisingly, since 2007, droughts have become an annual ritual. It is for this reason that 13 of Bundelkhand’s 14 districts across UP and MP were declared drought-prone and the government came up with a Bundelkhand Drought Mitigation package in 2009 with an outlay of Rs 7,266 crore. In the 12th plan period (2012-2017) the assistance package was increased to Rs 4,400 crore under the Backward Regions Grant Fund.

It is in this backdrop that Gureh and Banda district’s response holds lessons for the rest of India. “In Banda, we have introduced a five-part abhiyan (mission). Some of these include existing schemes, some are new. One is Kuan talaab jiao abhiyan. Under this, the villagers are encouraged to restore and revive wells and existing ponds, most of which had dried up,” says the District Development Officer K K Pandey. He points out that of the 7,638 wells in Banda that are “not under dispute”, 2,500 have already been revived since the mission was launched in December 2018.

Banda’s district magistrate, Heera Lal, who is responsible for both pushing the campaign as well as christening it, says that till March this year, the administration had helped villagers across Banda to revive 1,800 lakes. “It has become a jan andolan (a people’s movement), which is what the PM has wanted. We have held public meetings across the district with villages and their pradhans (village chiefs) to spread awareness on how their water needs in this dry region can be met simply by reviving the traditional lakes and water bodies that have always existed in Banda,” says Lal.

Pandey adds that two voluntary “missions” were added to the existing schemes as shramdaan (voluntary labour). One involved the villagers getting together to dig a pond, with rights to sell or donate the soil. The second roped in wealthy non-residents, often hailing from these villages, to fund the efforts. Fifty ponds have been voluntary “donated” by outsiders, he adds.

Apart from these missions launched in Banda, ponds across Bundelkhand’s seven districts that fall in UP have been made under the Mahatma Gandhi Rural Employment Guarantee Scheme (MGNREGS). However, this was not as effective, say the officials, because ponds are dug without any thought to sustain them. “When we plan ponds, we see what the water catchment area is, where the channels, the inlets and the outlets are, which direction the water flows in and where it collects,” says Lal. It is Banda’s better planning won it an award for its water project from the Water Resources Ministry in April this year.

The fifth scheme — called the “Apna Talaab Abhiyan” — was launched in UP in 2013. “This did not gain traction for a while. Ponds were dug sporadically. But over time the scheme started picking up as farmers started receiving partial funding from the government. As such, the number of ponds constructed quickly ramped up from 59 in the first year to 500 in the third. Last year 60,000 hectares of land was irrigated by such local ponds.

Forty-five years old Shyam Dwivedi, who owns seven acres of farmland in Riwan village of neighbouring Hamirpur district, built his first pond under this scheme. As a result, he was able to harvest three crops instead of one. He is not alone. Many farmers in the area, who would have otherwise left the village in search of work, have now returned to Riwan to build their ponds and till their land.

Even so, 50 per cent of Bundelkhand still receives water through tankers. It is imperative that the groundwater is recharged — not just for irrigation but also for the “nal se jal” (water from taps) scheme of the government to succeed.