Watch: Acquitted after 23 years in jail, Kashmir man breaks down at parents’ grave

Bhatt, who had a carpet business, spent almost two-and-a-half decades of his life in jail during which he lost his youth and his parents. 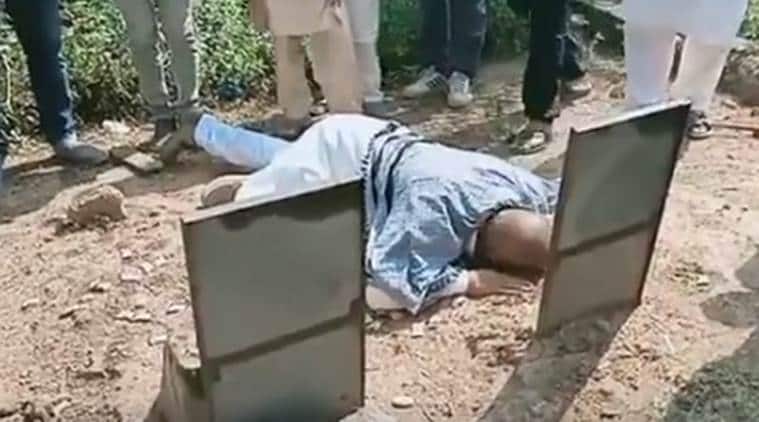 Ali, who was accused of terrorism and jailed for 23 years and a resident of Srinagar, can be seen prostrating in front of his parent’s grave. (Source: Video grab)

Two days after the Rajasthan High Court acquitted Ali Bhatt along with four others in the 1996 Samleti blast case, the first thing he did after returning home in Srinagar was to prostrate in front of his parents’ grave.

Bhatt spent almost two-and-a-half decades of his life in jail during which he lost his youth and his parents.

Accused of terrorism and jailed for 23 years, Ali Mohammad, a resident of Srinagar was not found guilty, along with four other. But he lost his youth, parents and almost 2-and-a-half decade of his life. First thing he did when he returned home ⬇️⬇️
pic.twitter.com/nSXwR8PhFu

While acquitting them on Monday, the High Court said the prosecution had failed to provide evidence of conspiracy adding that the prosecution could not establish any link between them and the main accused, Dr Abdul Hameed, whose death sentence was upheld.

After their release Tuesday, the five men said they didn’t know each other until the Criminal Investigation Department (Crime Branch) made them an accused in the case. While Beg is a resident of Agra, Goni is from Doda district of Jammu and Kashmir, and the others are from Srinagar. Before they were jailed, Bhatt had a carpet business, Baja used to sell Kashmiri handicraft in Delhi and Kathmandu, Nisar was a Class IX student and Goni used to run a school.

“We have no idea about the world we are stepping into,” says Goni. “We’ve lost relatives while we were inside. My mother, father and two uncles passed away. We have been acquitted, but who will bring back those years,” says Beg, adding that his sister has since got married and his niece is now about to get married too.

The case dates back to May 22, 1996, when a bomb blast in a bus near Samleti village in Dausa, on the Jaipur-Agra highway, killed 14 people and injured 37 others; the bus was headed to Bikaner from Agra. The blast came a day after the Lajpat Nagar bomb blast in Delhi, in which 13 people were killed. The chargesheet had said the men were associated with the Jammu Kashmir Liberation Front and claimed some of them were also involved in the Sawai Man Singh Stadium blast in Jaipur in 1996.

While 12 people were accused in the Samleti case, seven have been acquitted so far. While one was acquitted in 2014, six were acquitted on Tuesday.

At PAU convocation, Governor gets letter titled ‘To wake your conscience’