In his first Independence Day address in Srinagar, the L-G said that at first "we want to ensure a just and transparent administration that is dedicated to empowering the weak". 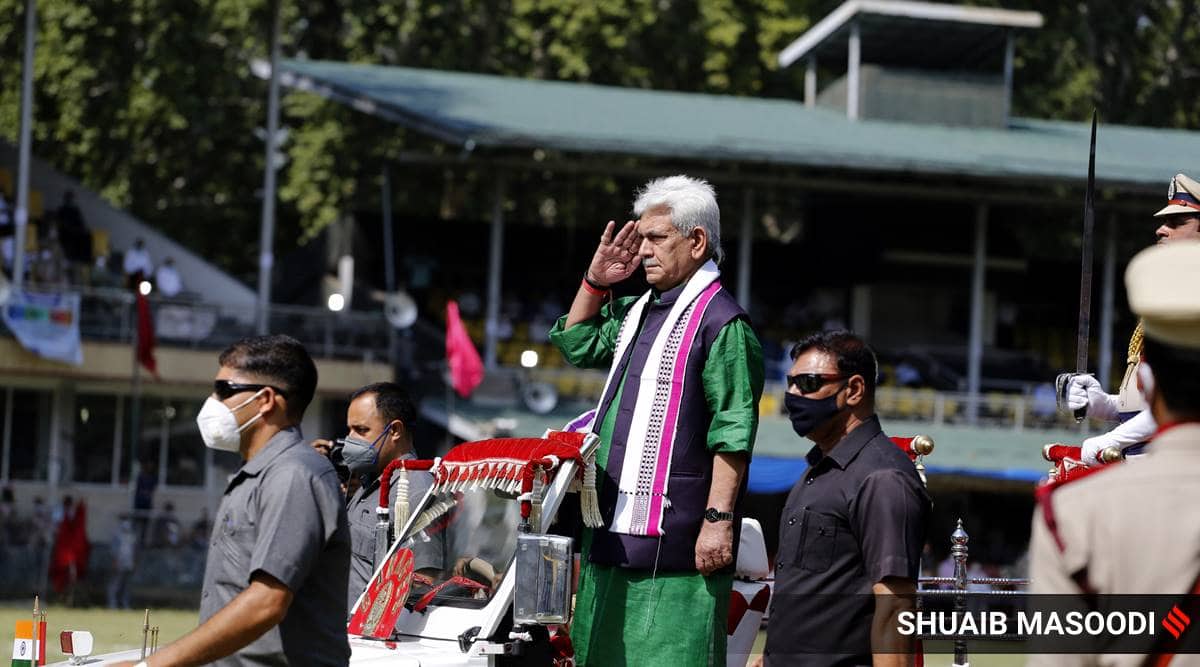 J&K's newly-appointed L-G Manoj Sinha said the government is committed to providing a better alternative that stands for development, welfare and social transformation for the people of Jammu and Kashmir. In pic: Manoj Sinha takes salute after hoisting the national flag during the 74th Independence Day celebrations at Sher-i-Kashmir Cricket Stadium in Srinagar. (Express photo by Shuaib Masoodi)

In his first Independence Day address in Srinagar, newly-appointed Lieutenant Governor Manoj Sinha highlighted five key priorities for his administration. After unfurling the tricolour at the Sher-e-Kashmir Stadium, Sinha said that “equality and justice are being gradually restored to Jammu and Kashmir.” Sinha, a senior BJP leader and former Union Minister, was appointed as the new Lieutenant Governor of Jammu and Kashmir earlier this month after Girish Chandra Murmu resigned.

Sinha also invoked former Prime Minister Atal Bihari Vajpayee’s slogan of ‘Insaniyat, Jamhuriyat, Kashmiriyat’ and lamented that while in Kashmir, humanity kept losing to terrorism over decades. “Jamhuriyat was enveloped in greed and Kashmiriyat succumbed to the hatred that emanated from this,” said Sinha.

Stating that it’s unfortunate that the story of cultural syncretism was defeated by sectarianism, the L-G said, “We want to change this narrative once again. We want to make development, peace, progress and social harmony the mainstay of the Kashmir narrative.”

Speaking on the revocation of J&K’s special status on August 5, 2019, the L-G said that after the constitutional changes of 2019, the Centre, within the first 30 days, took more than 50 big decisions “that will shift the picture in Kashmir.” He added that in the last one year, a new era of equality and change has been initiated. “A new journey has also started, and to reach the culmination of this journey, the government has set five main goals,” Sinha said.

Elaborating on the agenda for his administration, the L-G said that at first “we want to ensure a just and transparent administration that is dedicated to empowering the weak.” He also listed the establishment of a vibrant and grass-root level democracy among his priorities.

“We want to ensure maximum public welfare and for this we will that for this, every person benefits for government schemes and we are committed to enhancing the pace of development in all corners of Jammu and Kashmir,” Sinha said, adding that by increasing economic development and employment and use of technology “we will prioritise making J&K a robust centre of learning.”

With regard to the introduction of Domicile rules for J&K, the L-G said, “No administrative set up can be truly fair if a single person is left out of equal social, political or economic rights. New Domicile rules shall provide equality, justice to the those deprives earlier like women married outside J&K, West Pakistan Refugees, pahari-speaking people, safaikaramcharis among others.”

Addressing the youth of Union Territory, the L-G said that while youth is defined by activism, the purpose of activism should be nation building. “Some wrong decisions were taken after independence. These decisions created differences in the hearts of the people of Jammu and Kashmir. Generation by generation, the schisms of hate kept deepening,” he said.

He also stated that it will be the endeavour of his administration that “peace, prosperity and much-deserved happiness comes back in the lives of peace-loving citizens” of Jammu and Kashmir.

SPB stable, continues to be on life support