Around 10,000 post-graduate and 1,000 PhD students of the Visva Bharati University — the only Central Univeersity which has the Prime Minister as its chancellor — will receive their certificates on Friday.

Prime Minister Narendra Modi and his Bangladeshi counterpart Sheikh Hasina along with Chief Minister Mamata Banerjee are attending the convocation ceremony of the Visva Bharati University in West Bengal on Friday.

This will be the first time a West Bengal chief minister is attending the varsity’s convocation since Siddhartha Shankar Ray in the 1970s. In a break from tradition, Banerjee would be on the dais; Ray was not invited to the dais at the time. University Rector and Governor Keshari Nath Tripathi are also present at the convocation.

Around 10,000 post-graduate and 1,000 PhD students of the Visva Bharati University — the only central University that has the Prime Minister as its Chancellor — will receive their certificates on Friday. Mamata and the two prime ministers inaugurated Bangladesh Bhavan, which has been set up on the university campus, soon after the convocation.

Sheikh Hasina said, "Rabindranath Tagore belongs to both the countries because he has written the national anthems of both the nations. He wrote most of his poems in Bangladesh and that is why we can claim a greater right over him."

PM Modi also said, "Last year, we started an air-conditioned train service between Kolkata and Khulna in Bangladesh which was named 'Bandhan'. India is continuously providing electricity to Bangladesh. Presently it is 600 MW which is expected to be increased to 1100MW."

"Like we have inaugurated the Bangladesh Bhavan in West bengal, we have also taken the responsibility to renovate the residence of Ravindra Nath Tagore "Kuthibaari" in Kushtiya district of Bangladesh," PM Modi said.

PM Modi said, "Coming generations of both India and Bangladesh should know about the great dignitaries of their country. Our government is working for it."

"Rohingyas have taken shelter in Bangladesh. We've given them a place on humanitarian grounds. We want them to return to their country as early as possible. I request you to help us to interact with Myanmar so that they take Rohingyas back," said Bangladeshi PM Sheikh Hasina. What will be there at Bangladesh Bhavan?

The entire Parliament of India joined together to vote for the Indo-Bangla boundary agreement, says Sheikh Hasina

Scholarships will be provided to under-graduate and post-graduate students from Bangladesh as part of the activities of Bangladesh Bhavan. Modern Bangladesh and its history will also be represented through a museum, art gallery, library and such other installations. 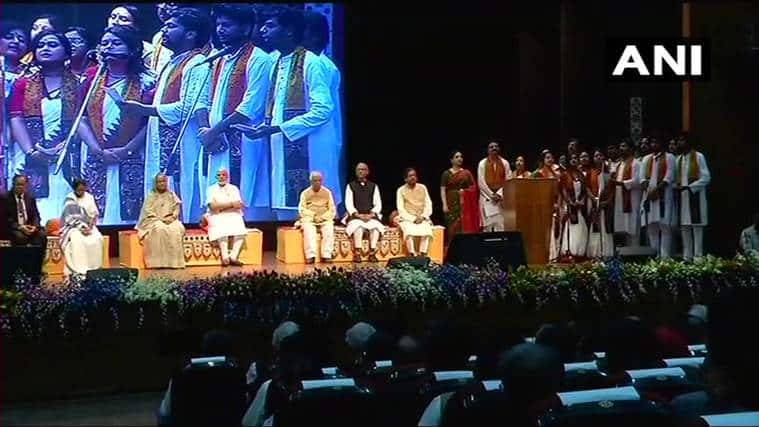 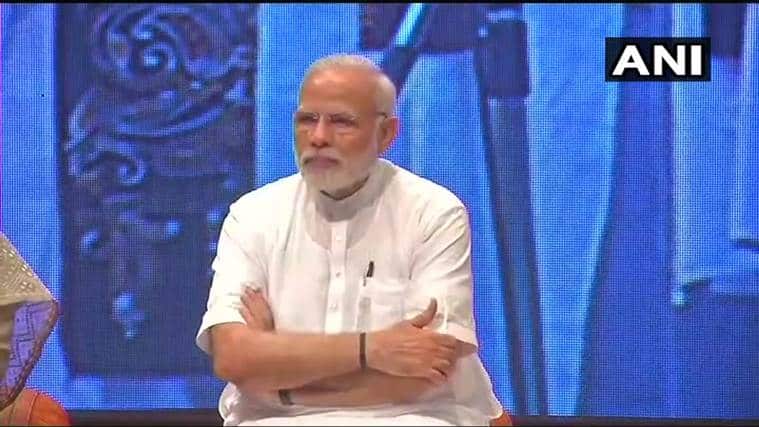 The aim of the Bangladesh Bhavan is to contribute in the field of language, culture, art, economy, history with emphasis on cultural exchange between the two countries. It will be a centre of exchange of academicians, performers, students, and will facilitate people to people exchange between the two countries with research in inter-cultural exchange. The influence of Tagore in Bangladesh shall be a core area of study and exhibition. A special picture gallery on the theme “The Tagores and Bangladesh” will include the history of the interaction of the Tagore family with Bangladesh.

For the construction of Bangladesh Bhavan, Visva Bharati allocated 11,112 square meter land adjacent to the Indira Gandhi Centre at Santiniketan, and it is being funded by the Bangladesh Government.

Kazi Nazrul Islam, through his writings, fought against all odds and injustice. The same spirit was upheld by Bangabandhu throughout his political life. In fact, the name of Independent “Bangladesh” was taken from a poem of Nazrul, where he used it.

Bangabandhu Sheikh Mujibur Rahman, the Father of the Nation of independent Bangladesh, shared Tagore’s liberal and humanist view of life. His choice of “Amar sonar Bangla, ami tomay valobashi [My golden Bengal, I love you]” as the national anthem of Bangladesh reflects his profound love and respect for Kabiguru Tagore. Bangabandhu was equally inspired by the great poet, popularly known as the “rebel poet” or “bidrohi kabi”, Kazi Nazrul Islam, who is also the national poet of Bangladesh.

'Tagore stands as a bridge between India and Bangladesh'

Tagore, indeed, stands as a bridge between India and Bangladesh. The Tagore family had a long association with Bangladesh and Tagore’s ideas and creations are part of the ethos of both countries. Tagore’s prolonged stay in Shelidah and Shahzadpur, in present-day Bangladesh, had exposed him to the majestic beauty of rural Bengal and its impact on the people, which in turn, shaped his views on the philosophy of life. On his return from East Bengal, Tagore had established Visva Bharati, which has been acting as a cultural link between our two countries.

Given the best of relations between the two countries, it is indeed most befitting that both countries are now trying to nurture the age-old connection of culture between them.

Hasina will be conferred an honorary Doctor of Literature degree by Kazi Nazrul University in Asansol, during its third convocation tomorrow. She is also expected to visit Jorasanko Thakur Bari, the ancestral home of Tagore, which has been turned into a museum dedicated to the life and works of the Nobel laureate, and also the Netaji Bhawan in Kolkata, the ancestral home of Netaji Subhas Chandra Bose, a great patriot of the freedom movement in India.

Prime Minister Sheikh Hasina's two-day official visit to West Bengal, is expected to further cement the enduring cultural links between the two countries. She came here to attend the convocations of two renowned universities in West Bengal, the Visva-Bharati in Santiniketan and Kazi Nazrul University in Asansol. The two universities are named after, and greatly inspired by, the life and works of the two most celebrated poets in India and Bangladesh, Rabindranath Tagore and Kazi Nazrul Islam. While Nobel Laureate Tagore is the composer of the national anthem of both countries, a unique instance in the world, Nazrul, the rebel poet, is the national poet of Bangladesh.

Read | Bound together by poetry

The Bangladesh Bhavan will house a museum, auditorium, library and cafeteria. Modi and Hasina are scheduled to hold talks there after the inauguration. Sources said the two are likely to discuss issues like Teesta water-sharing, cross-border terrorism and the migration of Rohingya Muslims from Myanmar to Bangladesh. Read More

Visva Bharati is the only central university in the country which has the prime minister as its chancellor. Former Prime Minister Manmohan Singh had last attended the convocation in 2008. “Due to some reasons, the convocation ceremony could not be held in the last five years,” said the acting V-C.

On reaching Santiniketan Thursday, Mamata said, “I was unaware that I will be the first Bengal CM to be present on the dais.”

Visva Bharati Convocation LIVE: The Bangladesh Bhavan will house a museum, auditorium, library and cafeteria. Modi and Hasina are scheduled to hold talks there after the inauguration. The two are likely to discuss issues like Teesta water-sharing, cross-border terrorism and the migration of Rohingya Muslims from Myanmar to Bangladesh, according to the sources.