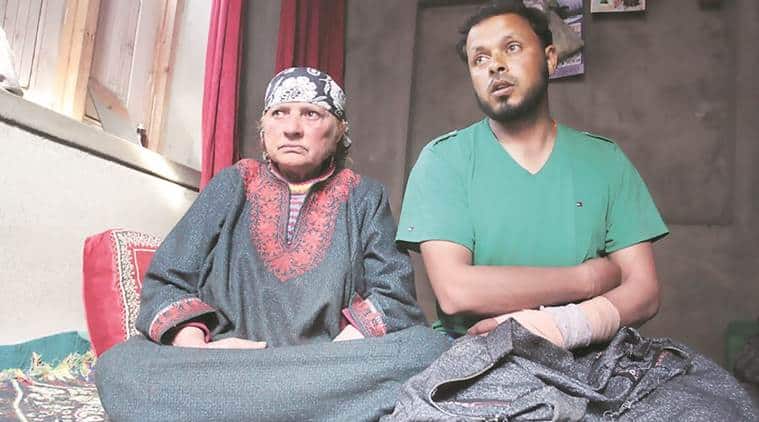 We are poor people, what will we complain: Farooq Ahmed Dar, his mother at their home in Chil, Budgam. (Photo: Shuaib Masoodi)

Two days after a video of Kashmiri youths heckling and assaulting CRPF personnel did the rounds of social media, another video surfaced Friday, this time showing a man tied to the bonnet of a moving Army jeep followed by a truck, ostensibly as a warning to stone-pelting protesters. As outrage mounted, Chief Minister Mehbooba Mufti sought a report from police, and the Army said it was examining the video. But the man on the jeep bonnet, 26-year-old Farooq Ahmed Dar, told The Indian Express: “I am not a stone-pelter. Never in my life have I thrown stones. I work as an embroiderer of shawls, and I know some carpentry. This is what I do.”

Sitting in his home in Chil, his swollen left hand bandaged, Dar said he was paraded for nearly four hours from 11 am on April 9.

Shaken by the ordeal, Dar said he will not file a complaint. “Gareeb log hain, kya karengey complain (We are poor people, what will we complain). I live alone with my asthmatic mother who is 75-years-old. I am scared. Anything can happen to me. I am not a stone-pelter.” His mother Fazie agreed: “No, we don’t want any inquiry. We are poor people. I don’t want to lose him. He is the only one I have to look after me in my old age.”

Dar said he was on his way to Gampora, 17 km from his home, to attend the fourth-day rituals of a relative who had died, on the day of the Srinagar Lok Sabha bypoll. He was riding a motorcycle while his brother Ghulam Qadir and neighbour Hilal Ahmed Magray, a village panch, were on another motorcycle.

At Utligam, they saw women protesting against the elections and stopped. “That was my big mistake.” He said even before he could get off his motorcycle, soldiers rushed out from an alley. “They beat me up, tied me to the front of the jeep, and paraded me across nine villages,” he said.

He said the women tried to rescue him but a shot was fired in the air and they fled. “I was tied to the front of the jeep. On my chest, a white paper was tucked under the rope. I could only see my name written on it,” Dar said.

“On the way, soldiers were shouting to people, ‘come throw stones at one of your own’. People were running away. They were scared. I was told not to utter a word to anyone or they would shoot me,” he said.

At Khospora, Dar said, some people pleaded with the soldiers to release him. “The soldiers said ‘we cannot, he is a stone-pelter,” he said. When they stopped at the CRPF camp, Dar said he counted 16 men as they got off the vehicles. He said “there was an officer, wearing goggles”.

“Around 4 pm, they bundled me into a Rakshak (an Army vehicle). I didn’t know where they were taking me. It was only after the door of the Rakshak opened that I could make out I was at the RR (Rashtriya Rifles) camp in Raiyari,” Dar said.

He said he was not questioned or beaten at either camp. At the RR camp, where he was kept for three hours, he was given a cup of tea. “I was released to my village sarpanch, Bashir Ahmed Magray, around 7.30 pm,” he said.

Hilal Ahmed Magray, who was on the other motorcycle, said they could only watch helplessly as Dar was tied to the jeep in Utligam and taken away. They waited a few hours and then began making calls for help. They called friends in Arizal village, closest to Raiyari, and asked them to make inquiries at the RR camp.

Arizal villagers, Magray said, confirmed that a man had been brought to the camp, and that a Major at the camp had said the person would be handed over to a “responsible person”. Magray asked Chil sarpanch Bashir Ahmed Magray to reach Raiyari.

Dar said he spent a sleepless night. The next day, there was a bandh in the Valley and he was taken to the nearest primary health centre instead of a hospital. A doctor prescribed painkillers and wrapped a bandage around his left arm.

Dar showed a pashmina scarf he had been working on for about 20 days — a white scarf with intricate blue embroidery. “I don’t think I will be able to finish it for a while now. It needs both hands,” he said.

The video featuring Dar being paraded went viral Friday and Chief Minister Mehbooba Mufti sought a report from police. According to an official release, the Chief Minister described the act as unacceptable and asked police to submit a detailed report so that necessary action could be initiated. She expressed concern and anguish over the surfacing of videos, reportedly from Budgam.

Former Chief Minister Omar Abdullah took to Twitter: “I understand the outrage the CRPF video generated. I’m also outraged that the video of the youth on the jeep won’t generate the same anger.” Tanvir Sadiq of National Conference called the incident “shocking” and “shameful”.

Army spokesman Colonel Rajesh Kalia said: “The contents of the video are being verified and investigated.”

Director General of Police S P Vaid told The Indian Express that “all details and the circumstances in which these videos were shot” need to be investigated. “So far no complaint has been lodged about the (the Army jeep) video. If someone comes with a complaint, it will be referred to the Army for investigation.”

Acting on an earlier video which showed CRPF personnel being heckled and kicked in Budgam on the day of the Lok Sabha bypoll, police arrested three persons.

“Five people were called for investigation, three have been arrested,” Vaid said, adding that a search was on for a fourth.

Earlier, the CRPF had lodged a formal complaint at Chadoora police station and demanded stern action against the youths involved in the incident.

Six months on, no trace of Najeeb: Delay in tracing auto driver, no CCTV footage bring probe to halt