Vibrant Gujarat Global Summit 2019: Prime Minister Narendra Modi on Friday inaugurated the 9th edition of Vibrant Gujarat Summit in Gandhinagar in the presence of thousands of delegates and business leaders from across the world. “India is now ready for business as never before. In the last 4 years, we have jumped 65 places in the Global Ranking of World Bank’s Doing Business report. But we are still not satisfied. I have asked my team to work harder so that India is in the top 50 next year,” he told the audience.

The three-day investors’ meet is taking place at Mahatma Mandir facility for international events in the state capital and is ready to witness the participation of the heads of five countries – Uzbekistan, Rwanda, Denmark, Czech Republic and Malta – and over 30,000 national and international delegates. Some of the major events during the three-day meet include a round-table interaction with the heads of global funds, ‘Africa Day’ and an MSME convention. The closing ceremony will be held in the presence of Vice President M Venkaiah Naidu, the CM said.

PM of Czech Republic is part of panel at a seminar

Andrej Babiš, Hon’ble Prime Minister of the Czech Republic attending #VibrantGujarat2019, is part of the panel present at the country seminar that highlights the theme Prospective Technological Partner of India on the Path to Common Prosperity with the Czech Republic. #VG2019 pic.twitter.com/ODzKagJLTw

"Indian industry has been doubling the defence exports in the last three years. Three years back, total defence export from India was only about Rs 1,500 crore. Last year, the figure reached Rs 4,500 crore. This year, by November, we have done Rs 7,500 crore export, and by March we are going to cross Rs 10,000 crore," said Kumar speaking at a seminar on 'Opportunities for Defence and Aeronautics in Gujarat' organised as part of the 9th edition of the Vibrant Gujarat Global Summit.

He termed opacity of the defence sector as one of the biggest challenges for the industry. Kumar added that defence investor cell, an online cell created by the government, acts as a guide to retrieve information, understand issues etc.

"This was started about ten months back and the MSMEs have particularly benefited from the cell in the last 10 months," he said.

Adani Group to invest Rs 55,000 crore in next five years in Gujarat projects

Billionaire Gautam Adani Friday announced an investment of over Rs 55,000 crore in the next five years in Gujarat projects including world's largest solar park, a copper plant, a cement unit, and a lithium battery manufacturing complex.

"Over the next 5 years, our investments will include the world's largest solar hybrid park in Khavda. The anticipated investment in this park is Rs 30,000 crore. We also plan to establish a 1 GW Data Center Park in Mundra, a one million ton copper smelting and refining project, a cement and clinker manufacturing unit in Lakhpat, an integrated Lithium battery manufacturing complex and expand our Photovoltaic manufacturing capabilities. Overall, we anticipate a total of Rs 55,000 crore of investment in all these projects," said Adani.

"India's data must be controlled and owned by Indian people and not by corporates, especially global corporations. For India to succeed in this data-driven revolution, we will have to migrate the control and ownership of Indian data back to India. In other words, give Indian wealth back to every Indian," Ambani said.

Reliance Industries has also invested billions of dollars in the roll out of telecom venture, Jio.

"Gujarat is Reliance's Janmabhoomi (birthplace) as well as its Karmabhoomi (workplace). Gujarat has always been - and will always remain - our first choice. We have so far invested nearly Rs 3 lakh crores in the state of Gujarat. And created and catalyzed over one million livelihood opportunities in Gujarat. In comparison to the past decades, Reliance will double this investment and employment numbers over the next ten years," he said.

Aditya Birla Group plans to invest Rs. 15,000 crore in Gujarat in the next three years on capacity expansion and setting up of new units, Chairman Kuman Mangalam Birla said at the event on Friday.

Investments would be made in various businesses segments ranging from textiles and chemicals to mining and minerals. Till now the Birla group's investments in the state are over Rs. 30,000 crore and counting, said Birla.

"Amongst our major expansion is with Grasim viscose staple fibre plant at Vilayat and Indian Rayon viscose filament yarn plant at Veraval. These will entail investments of Rs 7,500 crore," said Birla.

The group at present has 15 manufacturing plants providing employment to around 26,000 people. Birla said the investments on expanding group firm Grasim's chemical business will be around Rs 1,000 crore. The group is also increasing investment in green technologies at all of its plantsas part of environmental friendly measures as part of the new investments planned.

"All of these investments together run up to Rs 15,000 over a three year period," Birla said.

Participating in the Summit, Japanese auto maker Suzuki Motor Corporation Friday said it will commission its third plant at Gujarat by 2020 and will introduce new hybrid vehicles in India with technical support from Toyota, PTI quoted.

Suzuki Motor Corporation (SMC) President Toshihiro Suzuki spoke at the Summit and sought an enabling policy support from the government to further invest in localisation of components of hybrid and electric vehicles.

Suzuki said that first vehicle assembly plant of the company was inaugurated in September last year, the second plant will start shortly and they plan to commission the third plant by 2020.

Suzuki laid down the company's plan in Gujarat and said after three plants in operations, the annual production capacity of Suzuki Motor Gujarat will be enhanced up to 7,50,000 units and the company will also start production at its engine and transmission plant in the state shortly. The SMC said in a statement that it has started production of its hatchback Swift from the second plant in the state.

Suzuki said it will enable "us to bear fruit of integrated vehicle manufacturing in Gujarat"; and the state is becoming "more and more important as a production site for Suzuki group".

Acknowledging the challenge to reduce CO2 for the prevention of global warming, Suzuki said SMC is tackling the issue from various angles and as one of the solutions, it has decided to introduce electric vehicles in India in 2020.

"In the Indian context, we firmly believe that hybrid and CNG vehicles are the most effective solution, with fastest results," he asserted. 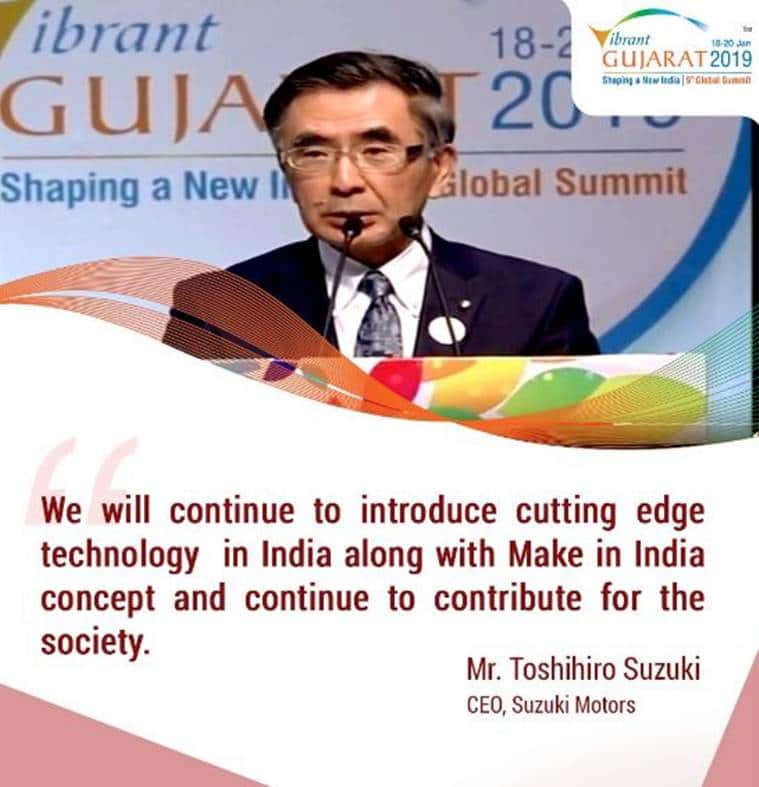 Have asked my team to get India in top 50 under Global Ranking of World Bank's Doing Business Report: PM Modi

Prime Minister Narendra Modi said in the last four years, India has jumped 65 places in the Global Ranking of World Bank's Doing Business Report, however, they are not still satisfied and have asked his team to work harder to get India in the top 50. "At 7.3%, average GDP growth over the entire term of our government, has been the highest for any Indian government since 1991, also the average rate of inflation at 4.6% is lowest for any Indian government since 1991," said Modi at the 2019 Summit.

At 7.3%, the average GDP growth over the entire term of our Government, has been the highest for any Indian Government since 1991.

At the same time, the average rate of inflation at 4.6% is the lowest for any Indian Government since 1991: PM

President Shavkat Mirizyoyev, President Uzbekistan during the #VibrantGujarat summit said that he is confident that Gujarat will improve the bilateral relations between India and Uzbekistan. #ShapeANewIndia pic.twitter.com/S0GxhVQLCv

We have worked hard to promote manufacturing to create jobs for our youth.

Investments through our 'Make in India' initiative, have been well supported by programmes like ‘Digital India’ and ‘Skill India’: PM

We have also made Doing Business cheaper.

The implementation of GST and other measures of simplification of taxes have reduced transaction costs and made processes efficient.

We have also made Doing Business Faster through digital processes and single point interfaces: PM

"Being a young nation, we need to create better job opportunities. Our focus includes bringing our industrial policies and practices to best standards. Cleaner and greener energy is also one of our commitments. We are now the fifth producer of renewable energy in the world - the fourth largest producer of wind and the fifth largest producer of solar energy," Modi said.

Doing business in India is a great opportunity: Modi

"Digital payments are under full implementation. We are in one of the largest ecosystems in terms of startups. Doing business with us is a great opportunity. We have world-class research facilities," the PM said.

We are honoured by the presence of many Heads of State and Government and several other distinguished delegates.

This shows that international bilateral cooperation is no longer limited to national capitals, but now extends to our state capitals as well: PM

Modi speaks on ease of doing business in India

"India is now ready for business. In the last four years, we have jumped 65 places of global ranking of ease of doing business. I have asked my team to work harder to ensure India is on the top 50 next years," Modi said.

'India one of the fastest growing economies in world'

"Those who visit India regularly will feel a change in ai, in terms of direction and intensity. Over the last four years, the aim of my government is to reduce government and increase governance. We wish to take deeper structural reforms to strengthen our economy. We continue to remain one of the fastest growing economies in the world," Modi said.

Prime Minister Narendra Modi, who arrived for a two-day visit to Gujarat yesterday, inaugurated the Sardar Vallabhbhai Patel Institute of Medical Sciences and Research (SVP Hospital) that plans to “provide world-class facilities” at “India’s first digital paperless hospital” as part of the curtain raiser of the Vibrant Gujarat Global Summit. The hospital has been built at the cost of Rs 750 crore with Rs 331-crore assistance from the Mukhyamantri Swarnim Yojana. The plan of shifting clinical staff from Ahmedabad Municipal Corporation-run V S Hospital to the SVP Hospital has been witnessing strong opposition from the Congress, V S hospital trustees, civil rights groups, among others, since the last one month.