Varanasi old city is seeing its first big infra project, a corridor from the Ganga to Kashi Vishwanath temple. Watching with trepidation are families losing ancestral homes, residents losing a way of life. The demolition has to be done by hand as machines can’t enter due to the narrow lanes. (Abhinav Saha)

It was always a plastic bag, on a bamboo stick. Sheela Tiwari would balance the weight of the bag, filled with home-cooked food, and the stick would go poking towards her neighbour’s window. Vibha, her neighbour and friend of 30 years, would use the same route to send over her delicacies. Then, in November, Vibha moved 7 km away to a spot across the river, near the helipad built for when Prime Minister Narendra Modi visits his constituency.

The window between Vibha and Sheela — standing in the path of the Shri Kashi Vishwanath Precinct Development Project — is now a rubble. 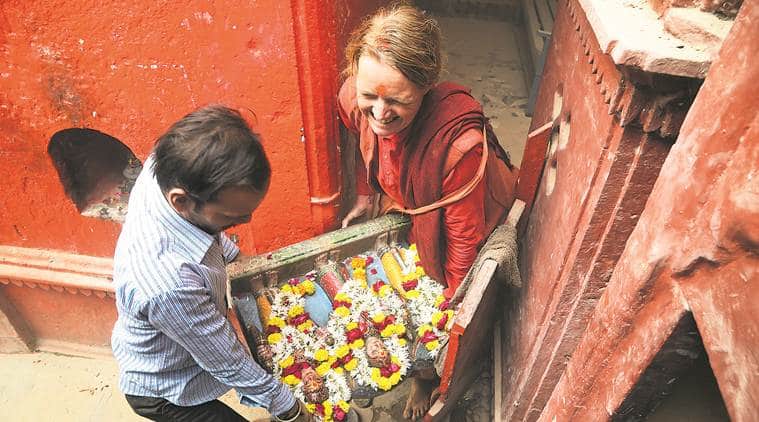 Brigitte Kroell, a German who has lived in Varanasi for a decade rescuing some idols from a broken home. (Abhinav Saha)

The first big infrastructure project in the heart of the old city in Varanasi, the Rs 600-crore pet initiative of the Yogi Adityanath government aims to transform 43,636 sq m of it by clearing a pathway between the Kashi Vishwanath temple and the ghats on the Ganga. At the end of it, a pilgrim standing anywhere between Lalita and Manikarnika Ghats would have a direct line of sight to the gold-crusted temple and the adjoining Gyanvapi mosque.

The point of the project, officials say, is to enhance pilgrim experience. A pilgrim seeking to offer prayers at the Vishwanath temple after a dip in the Ganga will now face nothing in between — congestion, crowds, or cows. Also being swept away in the process, say residents, is a way of life, as families that have lived for generations in the same house are moved to the outskirts of the city. The Lalita ghat, from where the corridor will clear a path to the Kashi Vishwanath temple. (Abhinav Saha)

Says Rajendra Tiwari, the former mahant of the Kashi Vishwanath temple, “Every part of the country is represented across these Ganga ghats. Where we are sitting is Lahori Tola, where people from Lahore came and settled. Then there are areas where the Bengalis settled, the South Indians, the Marathis.” They are changing the “vaastu” of the place, he says. “Yeh dharam adhikari nahin, dharam vypari hein (They don’t serve religion, they trade in religion).”

In April this year, Sheela remembers, her husband Indu Shekhar came home flustered after a meeting at the library that he had been managing for over three decades. He told her that on the first floor of that library — ‘Vishwanath Pustakalay’, popularly known as the Goenka Library — residents of the area, government officials, sadhus, and politicians had met to discuss plans for the Kashi project. “He told me, ‘What will happen to all the books? Where will we go if they break this place down?’,” Sheela recalls.

Indu Shekhar died a fortnight later, and the family is convinced it was the stress that killed him.

Ten months later, work is on at a laborious pace around the library building, which has for now been spared demolition. Young men with hammers break down houses, interspersed among which stand small temples. A dusty haze of rubble hangs in the air, while old wooden ornate doorways and fading peacock wall murals lie around. The demolition has to be done entirely by hand as the lanes are too narrow for any machines.

Suddenly, Brigitte Kroell, a German who has been living in Varanasi for a decade, emerges in her saffron clothes from a lane and starts shouting at the workmen in chaste Hindi. “I am looking for the pujari to take a bell out, he doesn’t have a mobile number,” she says, flustered. “There are still some murtis outside. Hanuman is in this red building.”

The workmen are not too happy. One of them complains that Kroell, or the “firang (foreigner)” as they call her, threw a brick at them the day before, that chipped off his toenail. Locals, including Sheela, watch amused from inside their homes.

Kroell has by now managed to save some idols, and locks them inside an adjacent temple. “I have to reach Vishal Singh,” she mumbles, “but he is not picking up his phone.”

The “Chief Executive Officer” of the Kashi Vishwanath Trust, Vishal Singh has his office in the Kashi Vishwanath Temple Complex. At 4 pm on a Wednesday, an assortment of anxious visitors are waiting for him. One claims RSS ideologue K N Govindacharya came the other day, and “saw the destruction and wept”.

Speaking to The Sunday Express, Govindacharya says, “My house where I used to live as a kid has been broken down, the place where we used to hold the shakha, has also been broken down… As Venice is the city of canals, Varanasi is a city of alleys. People will not come to Kashi to see skyscrapers. Varanasi has its own identity.”

Himanshu Tripathi, who belongs to the family of the mahants of the temple, makes the same point. “What kind of development takes place by breaking down temples and houses? Kashi is known for its alleys and houses sticking to each other… It has been given the impression that because of Kumbh (starting January 19), there will be a lot of crowds here. But this is just the Ardh-Kumbh. Modi government or not, Ardh-Kumbh and Purna Kumbha have always been there.”

On Singh’s desk lies a blueprint of the project, prepared by an Ahmedabad-based company. Singh says he pondered long before accepting the job. “I then decided that something that will change the face of the biggest faith centre for sanathan dharma for Hindus is something I should be a part of.” His finger tracing the blueprint, he stops at a point to say, “Yehan Pramod Vinayakji nikle”, about one of the idols discovered during the demolition.

As of December first week, Singh estimates, 187 of the 270 targeted houses have been demolished. A team inspects, negotiates with the house owner, pays them “double the circle rate” and then the demolition begins, he explains.

But the residents say it is not as simple as that. For one, the government speaks of circle rate in square metre terms, they say, while the market for buying a house is calculated as per square feet. Others say there is no uniformity on the compensation amount, and that in some cases, false cases had been slapped on people to make them agree to lesser rates.

Dismissing these concerns, Singh says that in their shoes, he wouldn’t have hesitated, “if compensated well”. He also claims that some of the demolished houses were nothing but encroachments. “A Shivaling has been discovered while demolishing the floor of a house, so what do you call that? For me it is an encroachment on the faith of an idol… (We found) toilets in temples; shops and bedrooms within temples.”

While some reports have claimed that the temples discovered are ancient, the Uttar Pradesh State Archaeology Department’s Subhash Yadav says, “We conducted a survey in the area where nearly 40 temples have been found within houses. None pre-dates the Kashi Vishwanath temple.”

Krishna Kumar Sharma, a man in his late 50s fondly called “Munna”, says the charge that people encroached on

temples is absurd. “Maybe the people were preserving these temples within their homes. Pujas were conducted every day,” he says, pointing to a temple whose sanctum sanctorum lies in a small room within a mesh.

While he is happy with the compensation he got, Sharma regrets what he will leave behind. “I, my children grew up here, the place between Maa Ganga and Vishwanathji. We will take years to settle into a culture away from this place.

How will we manage?… Ye seedhe-seedhe Hindu dharma par khula hamla hai (This is a clear attack on Hindu dharma).”

A short distance away, near Kabir Chora Hospital, S M Yasin, the joint secretary of the Anjuman Intizamia Masajid (AIM), the custodians of the Gyanvapi mosque, admits the Muslim community is watching the corridor with tension, while reiterating that they are not against development.

Yasin and a social activist, Ishteyaque Ahmed, talk of how one night in October, a part of the wall that separates the Gyanvapi mosque from the Kashi Vishwanath temple was broken by the labourers. Within minutes, the Muslim community gathered. “They wanted to test how angry we were,” says Yasin, adding that the District Magistrate acted promptly to restore the wall.

Ishteyaque Ahmed says the premise of the project is suspicious. Pointing out that the mosque too is heritage property, built in the 1600s, he says, “This is one of those rare cities in which we don’t get a feeling that someone is a Hindu or Muslim. The corridor is a good project if pilgrims’ experience is enhanced. But if you are highlighting its heritage value for visitors, why not consider sprucing up the mosque as well?”

On October 31, the AIM and Jitendra Vyas of the Ved Vyas Peeth, that has been razed too, went to the Supreme Court seeking a stay on “demolitions in the temple-mosque complex” till “security concerns” of the masjid were not addressed. On November 30, the court dismissed the petition.

In a lane near the project site, restaurant owner Samtha discusses the demolitions with a man who has brought her supplies. “If only the Hindus were united, we would not have let this happen. Look at how the Muslim community responded,” the man says, talking of the October incident.

Sheela Tiwari at the Goenka Library also wishes people had shown more “unity”. “Once people started selling their houses, then on my own I could not do anything.”

Singh justifies that there can’t be any end to “insecurities and apprehensions”. “I am here to talk to anyone who wants to.”

That being the case, Sheela has only one request, to talk to Modi. She wants to ask the Prime Minister if he could run a zip-liner from her window to Vibha’s. 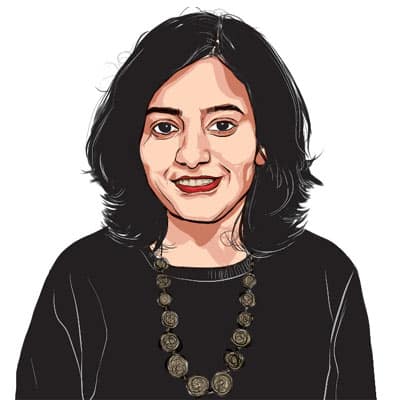