Train back home: At Vadodara station, migrants wait, with medical certificates and tickets that cost Rs 700

Many say that while they can’t wait to reach home, they know they will have to return to Gujarat. ‘If UP had opportunities, why would we leave in the first place?’ The migrant workers were asked to maintain social distancing and board their designated compartments. (Express Photo)

Shortly after midnight, 38-year-old Mohammad Alam, from Uttar Pradesh’s Saharanpur, reached the Vadodara Railway station by a City bus sent by the district administration. The buses were fetching 1,209 migrant workers from UP, stranded in Vadodara since the Covid-19 lockdown in March. They are now part of the first batch of migrants to return home by the special Shramik Express, from Vadodara Junction to Lucknow. The train is scheduled to depart at 2:30am Monday.

Clutching two pieces of paper as is if his life depended on them, Alam picked his red-and-brown shoulder bag and followed the instructions of the police officers, making sure the groups maintain distance and board their designated compartments. The two pieces of paper included a blank chit block, rubber stamped by the Vadodara City Mamlatdar, with “700/-” written in Gujarati under his name, and a medical certificate by the local urban health centre where Alam stayed for over a month, counting minutes of the lockdown.

The medical certificate, titled as having been issued from the ‘Government of Gujarat’, reads that Alam has no symptoms of Acute Respiratory Infection, fever, cough, cold, breathlessness or others, and is “valid for three days for the purpose of travel only”.

“The Mamlatdar’s paper is proof that I have paid for my train ticket to Lucknow, from where the UP government will make arrangements for my further travel to Saharanpur, they have told me. If I lose this, I am scared they will ask me to get off the train. I am going to keep it safe,” he said as he walked along, following the instructions of the police through the public address system, urging the travellers to keep safe distance and wear their masks at all times.

The special train, with 24 non-air-conditioned coaches, will cover the distance of about 1,110 kilometers in under 22 hours, with about four technical halts on the way. Each coach will carry 50 passengers to maintain social distancing as per the protocol decided by the government of India.

While no one will be allowed to get into the train at technical halts, railway officials confirmed that batches of migrants will be allowed to alight at important stations in UP where the train will halt, especially Kanpur, which comes before Lucknow. Railway officials confirmed that the decision to run the trains had been taken by the government of Gujarat in coordination with the state government of UP.

“The entire decision and transportation of migrants and social distancing has been handled by the administration. The Railways was only informed and instructed to provide the logistical support as needed. Even the ticket costs have been decided by the government and the process of issuing the tickets has also been handled by the nodal officers appointed to coordinate locally,” a top railway official told this newspaper.

Vadodara Commissioner of Police Anupam Singh Gahlaut said that the administration had drawn up a list of all migrants from UP who wished to return, including those who were sent back from the Gujarat-MP border in Dahod on Sunday and those prohibited from travelling on foot and without permits on Saturday. “This is the first batch of migrants leaving today. The second batch is also ready and we will be sending them shortly,” Gahlaut said.

Another labourer, who worked as a driver in Surat after trying his luck as a factory worker, Mohit Yadav (28) from Kanpur district, said, “I haven’t spoken to my family for almost ten days because my mother, wife and three daughters would only keep crying. It was driving me mad. Last week, I told them they are sending us back after the migrants from Rajasthan and MP left and they were happy, but then there was no news.” 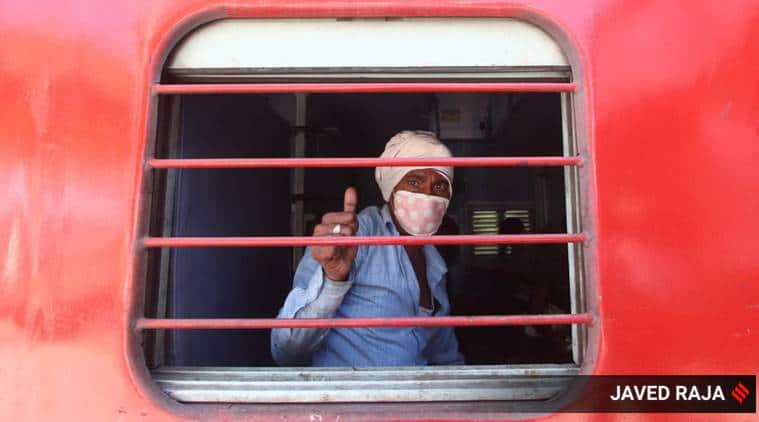 Railway officials confirmed that the decision to run the trains had been taken by the government of Gujarat in coordination with the state government of UP. (Express Photo by Javed Raja)

“Today I called them to say I am leaving for the station, they were excited and also relieved. The big worry is arranging money for the family in the next few days. I have exhausted all the money I had in trying to hitch rides on trucks back home, which did not materialise. My salary for March and April has not been given yet and I don’t know if it will even come.”

For 58-year-old Baharbegum from Jahanabad, the journey back is for the good. She has been living with her son in Vadodara for over five years in a rented apartment but does not intend to return. “I have been feeling homesick for long and the lockdown only made it clear to me that it’s time to go back home. I asked my son to register my name to travel back on this train. He will stay back here because he has to work with the local construction contractor, but I have made it clear that I am not coming back,” she said.

When a team of medical officers arrived around 9pm at the VMC-run Dayanand Saraswati Vidyalaya in Vadodara to screen the 24 migrants from UP who had been housed there since the lockdown began in March, Rajkumari Nisad (25) had only one question: “What should I do to safely travel back to Kanpur in this advanced pregnancy?” Although the doctors advised her to be careful during her journey, Rajkumari knew there was no other way out for the family including her husband Luvkush, 29, and a 20-month-old son.

“Going back home is important. I just hope that the journey will not be too taxing. I have already taken risks during my fifth month, when we had left from Pandesara in Surat (where her husband worked as a textile weaver), walking a long distance and climbing in and out of multiple trucks on the way. Now, I just want to go home and deliver my baby safely,” she said. The special train, with 24 non-air-conditioned coaches, will cover the distance of about 1,110 kilometers in under 22 hours, with about four technical halts on the way. (Express Photo by Prashant Nadkar)

Another migrant family from Makrandpur in rural Kanpur — Dharmendra Kumar (30),  his wife Mamta Devi (26) and two children aged 5 and 3 — have borrowed Rs 1400 for two tickets for the adults from other labourers. “We did not have the money. Luckily our children have not been charged because they are under 12 years of age. We borrowed from two people who live in a village close by in Kanpur. We will pay them in installments once we are back home,” says Dharmendra, who worked at a construction site in Surat and was among the group that was prohibited from travelling to UP during the first lockdown in March.

He said not returning for work is hardly an option. “May be those who are unmarried and don’t have immediate responsibilities will think of not coming back, but if we really had the kind of opportunities back in UP, we would have not come here in the first place. Ghar se door rehna kisko pasand hai? Pet ki majboori hoti hai… Right now also, I have loans to pay off and I will have to come back once things settle, may be after a few months or next year. Par aana to hai…”