An uphill climb for a pahadi restaurant, name cooks up a storm

Owner Preeti Maindoliya, protesters argue, has insulted the hill people to "matrashakti (woman power)" with the name of the restaurant. One of the protesters, who allegedly assaulted Maindoliya, has been arrested. 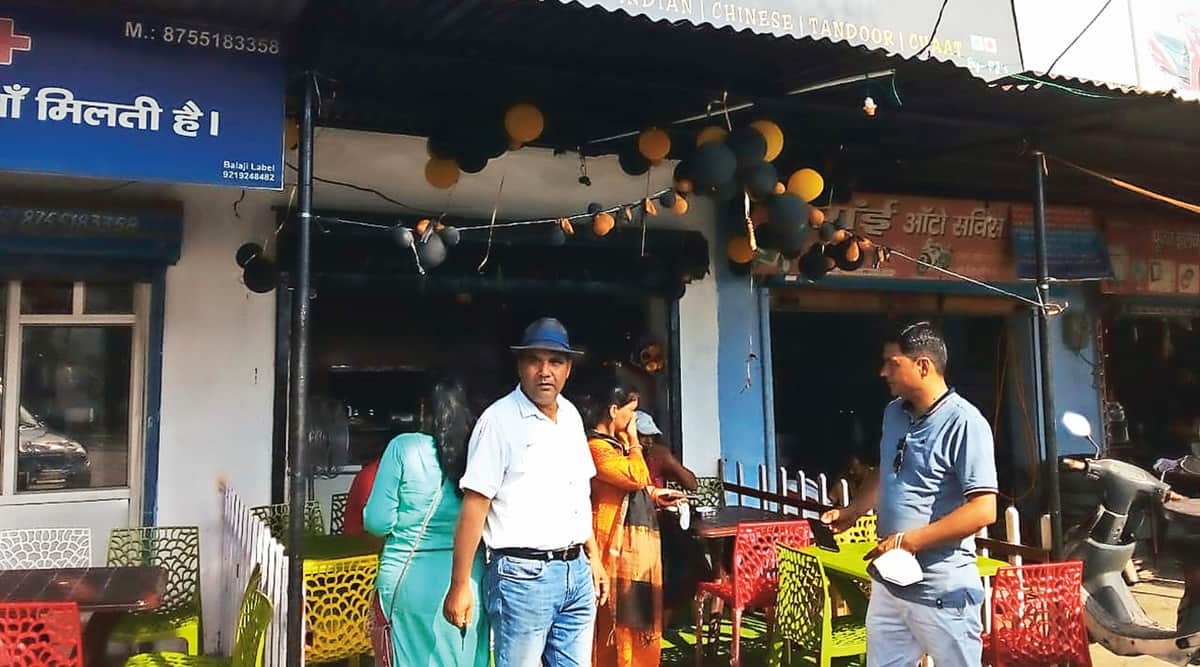 The restaurant at Banjarawal area of Dehradun. (Express Photo)

A nondescript restaurant promising Indian, Chinese, Tandoori and Chaat food, with local recipes on its menu, and the photo of a cherubic child chuckling next to a tandoor steak on its board, is hardly the stuff of haute cuisine. However, in six days of operations, Dehradun to Delhi, ‘Pyari Pahadan’ has cooked up a storm.

Owner Preeti Maindoliya, protesters argue, has insulted the hill people to “matrashakti (woman power)” with the name of the restaurant. One of the protesters, who allegedly assaulted Maindoliya, has been arrested.

A B.Tech, Maindoliya, 26, says running a restaurant was her first dream, and so she decided to pursue it after two years of working as an electronics engineer. She took up an 180 sq ft space in the Banjarawal area of Dehradun, and named her eatery ‘Pyari Pahadan’. The name had always appealed to her as ‘Pahadan’ was what her classmates from the plains called her in college, she says. Her mother moved from Dhumakot, their village in Pauri Garhwal, hit by migration like many other villages in Uttarakhand, to help her run the restaurant.

But within an hour of the restaurant opening on August 1, a man later identified as Surendra Rawat did a Facebook Live from the site, objecting to the name. Later, he arrived with some women, who allegedly threatened Maindoliya, calling the name an insult to matrashakti and pahadis. “I told them I was also a pahadi, and had been born and brought up in Pauri Garhwal district,” says Maindoliya, the daughter of a government teacher.

Soon, she says, she also got calls on her phone threatening that unless she changed its name the restaurant would be vandalised.

On August 2, Rawat reportedly arrived with Bhawana Pandey and Pramila Rawat, and Maindoliya was assaulted, causing her to pass out. Her mother Neelima filed a complaint at the Patel Nagar Police Station and an FIR was lodged against the three under IPC Sections 354 (assault on a woman with intent to outrage her modesty), 323 (voluntarily causing hurt) and 506 (criminal intimidation). Surendra Rawat has been arrested and probe is on, Pradeep Rana, Station Officer, Patel Nagar, said.

While Maindoliya says she was told the three were associated with the Uttarakhand Kranti Dal (UKD), the political outfit issued a statement denying any links and condemning the attack on her. “Bhawana Pandey is not associated with the UKD. Names of some other persons associated with the UKD have appeared in the matter and will be probed. The UKD fully supports the victim and will cooperate in getting the guilty punished,” a release by UKD state president Kashi Singh Airy said.

Pandey on her part claims to have fought for Uttarakhand’s statehood, and says she is a social worker aspiring to contest the next Assembly elections. Denying raising hands against Maindoliya, she says, “The word pahadan represents women of the hills and it is associated with their honour. The title ‘pyari pahadan’ is objectionable. What do they want to serve there with this title? Would you like it if somebody calls your mother or sister a ‘pyari pahadan’?”

Pandey also claims that Pramila Rawat is a leader of the UKD. Pramila was not available for comment.

Maindoliya says she is determined not to change the name, particularly due to the support she has received since sharing her ordeal on social media. Several people, including politicians, have come to her restaurant to eat as a gesture of support. Among the delicacies the restaurant offers is mandwe ki roti (made of iron, protein-rich ragi, grown in the hills); kheer of jhangora, a local rice variety; daal of local pulse tor; and Gahat ka fadu (gahat being a pulse given to patients of kidney and gall bladder stones).

AICC general secretary and former chief minister Harish Rawat called Maindoliya up as well as tweeted asking people to visit her restaurant for a pahadi meal. Former Congress state president Kishore Upadhyay dropped in with party leaders. A delegation of the Aam Aadmi Party (AAP), which is seeking to contest Uttarakhand elections, has also met Maindoliya. Calling the restaurant an evidence of her entrepreneurship and reflection of “Uttarakhandi spirit”, AAP leader Ravindra Jugran said, “If a dhaba with the title ‘Pyari Pahadan’ is not opened in Uttarakhand, where will it be opened? Those who created a controversy, they do not know the actual meaning of pyari pahadan.”

Maindoliya’s mother Neelima says she and her husband fully back their daughter. “My husband helped her get a loan. She has not given up even after this controversy. I am also a pahadan and don’t feel insulted by the title.” Plus, Neelima adds, “Preeti has given employment to four Pahadi youths who lost restaurant jobs during the Covid lockdown.”