UP village empties out as 12 die after fever; officials test for dengue, malaria

With panic spreading due to the death of at least 12 people in the last one month here due to a “mysterious fever”, many have left. 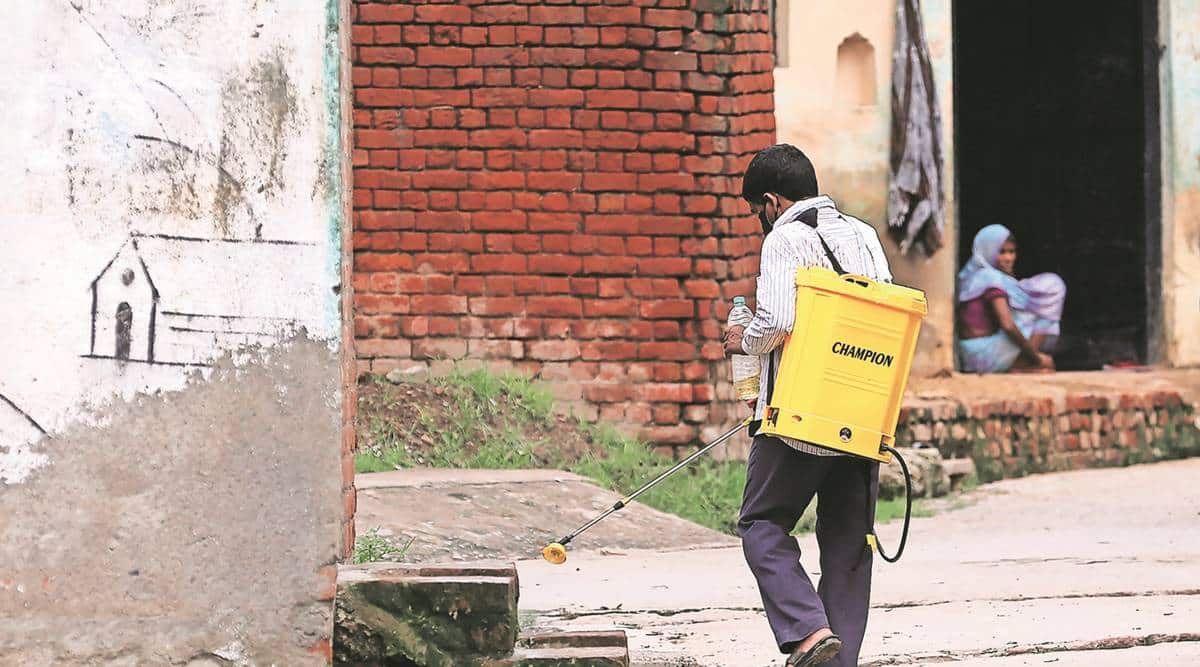 Following the deaths, officials said they were carrying out fogging in Kursauli village, Kanpur.(Express photo by Vishal Srivastav)

Silence envelops Kursauli village under Kalyanpur Block of Kanpur Nagar district on Saturday afternoon, with many houses locked. With panic spreading due to the death of at least 12 people in the last one month here due to a “mysterious fever”, many have left. On Saturday, another death was reported, of village head Amit Singh’s aunt Geeta, 40.

Anil Kumar (40), who works at a private company in Kanpur city, says his children and wife are at his in-laws’ house, while he stayed behind to look after their buffalo. “If people did not have cattle and farms, the village would have been empty. There is not a single house which does not have cases of fever, and many have gone to houses of relatives. Some have even rented houses in nearby areas,” says Kumar.

Additional Chief Medical Officer (CMO) of Kanpur Nagar district Dr Subodh Prakash admitted they were yet to figure out the exact cause of the deaths. “Most of the people who died were not tested for dengue or malaria, while all those who tested positive for dengue have recovered. Zero malaria cases have been found in the tests done,” Prakash said, adding that a three-member committee has been set up under the District Public Health Expert to do a death audit.

“The neighbouring villages don’t have this problem,” he pointed out.

Tannu’s father is a daily wager, like most earning members in this village of around 1,200 people. Says her sister Arti, “At least four people in the family had fever. Tannu fell ill on August 18, and died while we were taking her to Hallett (Lala Lajpat Rai Hospital). Our brother who is five recovered.”

Pradeep Tewari, 48, a farmer, says that at least 50 of the 180-odd houses in the village are locked. Tewari’s aunt Nirmala Tiwari (65) and sister-in-law Chama Tewari (28) died following fever, within days of each other.

He drops his voice saying he doesn’t want to alarm family members still battling the fever, including his uncle Chandrashekhar (70), who is on oxygen support at home.

Sarpanch Amit Singh says they are in shock about his aunt’s death. “She was healthy. When she caught a fever three days ago, we took her to a private hospital. Her situation worsened and she was referred to another hospital, where she passed away,” he says.

Mohini Gupta’s daughter Vaishnavi has been the youngest casualty. The 11-year-old died within three days of getting the fever. “She had a stomach ache, was vomiting and had a high fever. My younger son also fell ill but recovered. We spent more than Rs 1 lakh on the treatment, borrowing from locals and moneylenders,” says Gupta.

Her husband sells chaat from a cart, she adds. “How will we repay that money?”

Lashing out at officials, she says they came and threatened them with a case if they did not build a pucca toilet. The family uses a hole dug outside the house as a toilet. “You tell me how we are supposed to build a toilet when most people in the family are ill and we are facing a huge debt?” Gupta says.

The family of Julie, who died on September 5, is also worried about the warning to build a toilet. “All 13 people in my family have had fever in the last one month,” says her brother Raghvendra.

An official at the Kalyanpur Community Health Centre (CHC) admitted urging the villagers to build toilets, saying they believe choked drains could be one reason for the fever outbreak. “The village does not have a sewage system. They dispose of garbage into open drains… We have served notices to 30 families to build proper toilets soon. A public announcement regarding this was also done,” says the official.

Additional CMO Prakash says, “We are doing fogging, spraying and other things to ensure cleanliness. We are also running a campaign to make people aware of this.”

Jitendra Kumar, a pharmacist who was part of the health team at the CHC Saturday, said, “As per our survey on Thursday, 52 people had fever. We received information on 18 more cases Friday, and eight today. Several people have recovered too. We are keeping a close watch.”

Kumar admitted there was panic. “Some people are in hospitals… Around 40 per cent of the houses are empty because people have gone to their relatives’ homes.”

Villagers in Kursauli are worried they might face a boycott next. “People in neighbouring villages have started avoiding us. We might find it difficult to find work in nearby villages soon if the fever situation is not brought under control,” says Dasarth (38), who works as a farm labourer.