Both Boris Johnson and Narendra Modi welcomed the strong resilience shown by the economies of India and the UK and the positive growth in bilateral trade showcasing the potential to double trade by 2030, as envisaged in the Roadmap 2030. 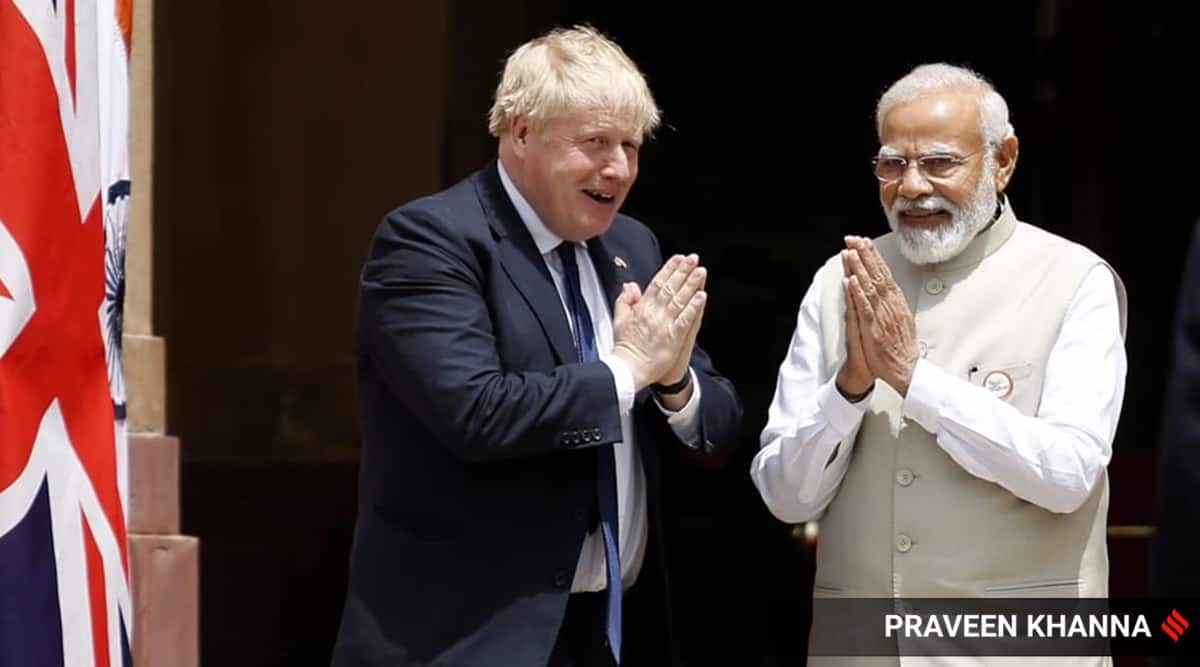 “As the next round of talks begins here next week, we are telling our negotiators to get it done by Diwali in October… this could double our trade and investment by the end of the decade,” Johnson said.

Stating that the two sides are working closely and making “good progress”, Modi hoped they will be able to conclude the pact by the end of this year.

“Teams of both countries are working on the subject of the Free Trade Agreement. Good progress is being made in the negotiations. And we have decided to make full efforts towards the conclusion of the FTA by the end of this year.”

PM Boris Johnson said, “India-UK partnership is one of the defining friendships of our times.” (Express photo by Praveen Khanna)

“In the last few months, India has concluded Free Trade Agreements with UAE and Australia. At the same pace, with the same commitment, we would like to move forward on the FTA with the UK as well,” Modi said.

Dealing with the bear

“They noted with satisfaction that good progress had been made already, and that the agreement of an FTA would unlock the full potential of the trade and commercial relationship, boosting jobs, investment and exports. They set a target to conclude the majority of talks on a comprehensive and balanced Free Trade Agreement by the end of October 2022,” the statement said.

It said that both leaders welcomed the finalisation of the India-UK Global Innovation Partnership (GIP) implementation arrangements in the field of trilateral development cooperation, wherein India and UK will co-finance up to USD 100 million over 14 years to support the transfer and scale up of climate-smart inclusive innovations from India to third countries in Asia, Africa and the Indo-Pacific and accelerate the delivery of the Sustainable Development Goals.

Modi said: “Today, the conclusion of the implementation arrangements of the Global Innovation Partnership between us will prove to be a very important initiative. This will further strengthen our development partnership with other countries. Under this, India and the UK will co-finance up to $100 million for transfer and scaling-up of “Made in India” innovations to third countries. These will also help in achieving sustainable development goals, and in efforts to tackle climate change. This will prove to be very useful for our start-ups and MSME sector in exploring new markets, and in making their innovations global.”

The leaders welcomed the strong resilience shown by economies of India and the UK and the positive growth in bilateral trade showcasing the potential to double trade by 2030, as envisaged in the Roadmap 2030.

They expressed satisfaction at the progress made under the Enhanced Trade Partnership (ETP) and called for “early resolution of all pending market access issues in a balanced manner”.

They looked forward to finalising the mutual recognition of qualifications and a framework for nursing staff and agreed to continue cooperation on outstanding areas related to social security arrangements and legal services.

The two countries discussed new cooperation on clean and renewable energy, aimed at supporting India’s energy transition away from imported oil and increasing its resilience through secure and sustainable energy, and addressing climate change in both the UK and India.

Wonderful to see you, my friend PM @BorisJohnson in India on a long-awaited visit. Look forward to our discussions today. https://t.co/6gUxR1PwPH pic.twitter.com/z6Ufv8zgAb

The UK and India are launching a virtual Hydrogen Science and Innovation hub to accelerate affordable green hydrogen, as well as new funding for the Green Grids Initiative announced at COP26, and collaboration on joint work on the electrification of public transport across India.

Advertisement
Speaking about the success of India-made coronavirus vaccines, UK PM Boris Johnson said that he had received the jab developed by the Serum Institute of India and Astrazeneca. (Express photo by Praveen Khanna)

“As well as boosting our domestic energy and economic resilience, the UK and India are collaborating as a force for good globally. Our governments are committing up to £75 million to roll out adaptable cleantech innovations from India to the wider Indo-Pacific and Africa, and working together on international development and girls education,” the British government said.

It’s been a real pleasure to be in Gujarat today to see the fruits of the incredible partnership between the UK and our friends in India.

Today we have confirmed more than £1 billion in new investments between our two great countries, creating almost 11,000 new jobs in the UK. pic.twitter.com/dvR0OG775n