In its counter, the RBI Board noted that "while any incidence of counterfeiting is a concern, Rs 400 crore as a percentage of the total quantum of currency in circulation in the country is not very significant". The minutes were signed by RBI Governor Urjit Patel on December 15, 2016, five weeks after the meeting was held. (Express Photo by Nirmal Harindran)

Less than four hours before Prime Minister Narendra Modi announced demonetisation on November 8, 2016, the Central Board of the Reserve Bank of India (RBI) gave its approval to the scheme but also rejected, in writing, two of the key justifications — black money and counterfeit notes — that he would make in his televised address to the nation.

The minutes of the 561st meeting of the RBI’s Central Board, which was convened hurriedly in New Delhi at 5.30 pm that day, reveal that the central bank’s directors described the move as “commendable” but also warned that demonetisation “will have a short-term negative effect on the GDP for the current year”.
Read in Bengali | Read in Tamil | Read in Malayalam

The minutes were signed by RBI Governor Urjit Patel on December 15, 2016, five weeks after the meeting was held. In all, six objections, described as “significant observations”, were recorded in the minutes by the RBI Board.

READ | Scars from 2016 only getting more visible, says Manmohan Singh

The RBI directors, after receiving a proposal draft of the scheme from the Ministry of Finance on November 7, 2016, argued that the government’s reasoning, that the withdrawal of HD (high denomination) currency notes of Rs 1,000 and Rs 500 would help in curbing black money and restrict circulation of counterfeit cash, did not really hold good.

The minutes list out the justifications given by the Ministry of Finance. 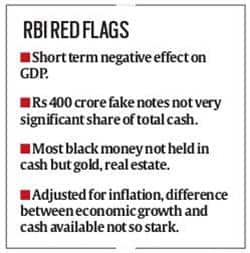 On demonetisation curbing the flow of black money — the minutes recorded the facts and figures given in the government’s White Paper on Black Money — the Board noted: “Most of the black money is held not in the form of cash but in the form of real sector assets such as gold or real-estate and… this move would not have a material impact on those assets.”

On fake currency, the Ministry informed the Board that counterfeiting is on the rise in denominations of Rs 1,000 and Rs 500, and the total quantity of such currency is estimated to be around Rs 400 crore.

In its counter, the RBI Board noted that “while any incidence of counterfeiting is a concern, Rs 400 crore as a percentage of the total quantum of currency in circulation in the country is not very significant”. Among the other counter-points, the Board recorded that the growth of the Indian economy and its linkage to the high amount of HD currency in circulation, as pointed out in the government’s proposal, was flawed since the rate of inflation had not been taken into consideration.

The minutes of the meeting noted: “The growth rate of economy mentioned is the real rate while the growth in currency in circulation is nominal. Adjusted for inflation, the difference may not be so stark. Hence, this argument does not adequately support the recommendation…”

READ | Currency confiscation was not objective of demonetisation: Arun Jaitley

The Board also put in writing that it envisaged that the withdrawal of HD currency notes would have a negative impact on two sectors in particular: medical and tourism.

Thus, it pointed out, private medical stores should also be included in the exemption list.

Recording the problems that incoming tourists may encounter, the RBI directors noted: “Arriving domestic long distance travelers who may be only carrying high denomination notes will be taken by surprise at railway stations/airports for payment to taxi drivers and porter charges and hence put to hardship. It would also have adverse effect on tourists.”

The minutes include an “assurance” that the issue of demonetisation was under discussion between the central government and the RBI for six months during which “most of these issues had been discussed”.

READ | Chidambaram: ‘RBI Governor can either transfer money to govt or resign’

The RBI Governor also recorded that apart from the stated objectives, “the proposed step also presents a big opportunity to take the process of financial inclusion and incentivising use of electronic modes of payment forward as people can see the benefits of bank accounts and electronic means of payment over use of cash…”

The minutes were signed off with the RBI’s resolution for the withdrawal of banknotes of Rs 1,000 and Rs 500. But with the following lines on record: “The Board was assured that the Government will take mitigating measures to contain the use of cash… the Board considered the memorandum and after detailed deliberations concluded that in larger public interest, the balance of advantage would lie in withdrawal of legal tender status of Rs 500 and Rs 1,000 currency notes currently in circulation…”