Two months after explosive surge, second wave of Covid-19 still visible but its worst over

Two months since that milestone, the Covid curve, after claiming a devastating toll of at least 1.76 lakh lives, is finally falling into a zone where the disease, experts say, could be handled by existing health infrastructure. 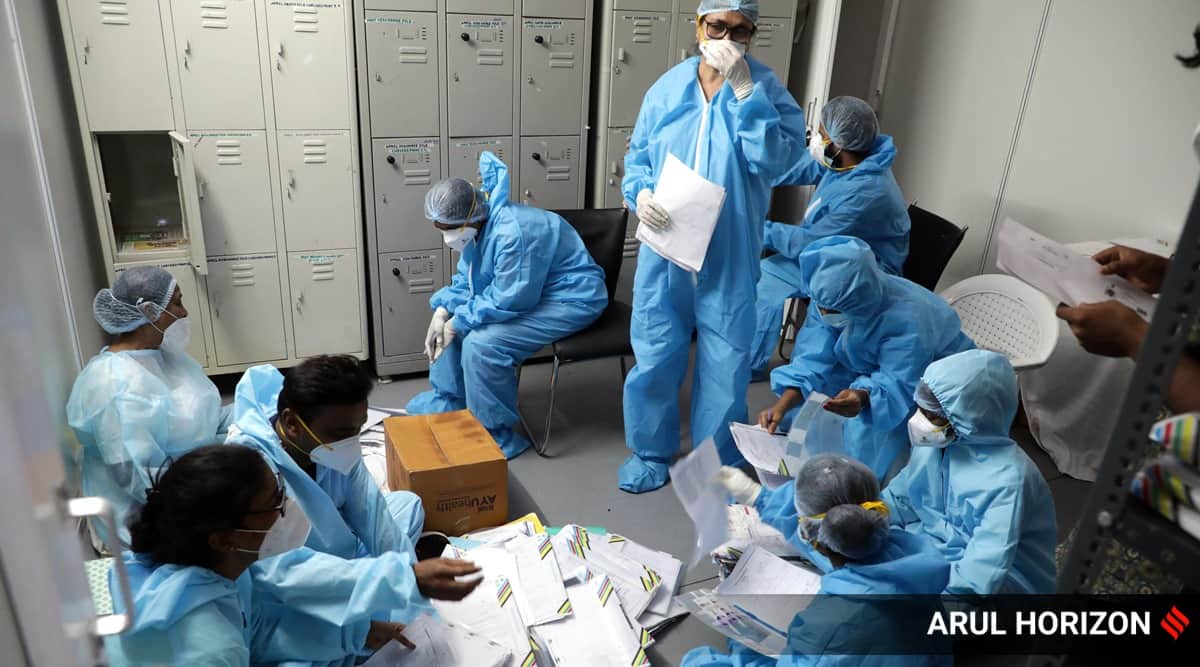 Health staff in the record room of Jumbo Covid hospital, Pune. The daily case count in Pune is now below 2,000. (Express photo by Arul Horizon)

April 4 was the first time India’s daily Covid case count crossed 1 lakh setting off the most explosive phase of the pandemic during which the daily count of new infections reached as high as 4.14 lakh on May 6.

Two months since that milestone, the Covid curve, after claiming a devastating toll of at least 1.76 lakh lives, is finally falling into a zone where the disease, experts say, could be handled by existing health infrastructure.

The number of active cases in the country is less than half that of the peak; the case count has begun to decline in almost every state; and, for the first time in more than two months, the weekly positivity rate has fallen below overall positivity.

The biggest relief is that the daily count of deaths has begun to come down as well. Less than 3,000 deaths are being recorded every day, compared to the high of over 4,400 barely 10 days ago.

The worst might be over but the second wave is not yet. The daily count of cases, at least 1.22 lakh Wednesday, is still way above the peak of the first wave: 97,894 on September 16 last year. So is the number of active cases, and the daily death count. And most states in the North-Eastern barring Assam are still in the midst of a surge.

Yet, there’s reason to hope in the national curve. “By the end of this month, the daily case count should be somewhere around 20,000. That means we would be roughly at the same place where we were at the end of January before the start of the second wave,” said Prof Manindra Agrawal of IIT Kanpur, who has been running a computer simulation to predict the course of the pandemic.

That would mean a faster decline that was anticipated earlier. But Agrawal said he was not surprised by the rapid pace of the decline in India’s case count.

“The lockdowns by the state governments have helped, no doubt. But even in the absence of the lockdowns, the peak would have been achieved around the same time, in the first or second week of May. Just that the peak would have been much higher than the 4.14 lakh that have seen. The trajectory of the pandemic is broadly in line with what our computer model has been predicting so we can say with reasonable confidence, that if nothing unexpected happens, then by the end of this month, the second wave might be over. We would be at the same place where we were before it started,” he said.

Agrawal said his model showed that the ratio of reported and unreported cases had not changed much between January and now.

“The last serosurvey by the Indian Council of Medical Research, which was released in January, had shown that for every reported cases, that is confirmed through diagnostic tests, about 25 cases go unreported. So that the actual number of infections in the population is likely to be 25 times more than the confirmed cases. Our calculations show that this ratio has not changed much between then and now,” he said.

That would mean that nearly 70 crore people (25 times current case count of 2.8 crore) in India would have been infected since the start of the pandemic last year. Even a conservative estimate would put this number at 40 crore, or close to one-third of India’s population.

This number would have a bearing on how strong the subsequent waves of infection could be. Another key factor would be the number of people who have been vaccinated. Over 22 crore people in India have received at least one dose of the vaccine until now. There would be an overlap between those who have been infected and those who have received the vaccine. But even then, close to 50 crore people in India could be said to have developed some amount of immunity against the virus, either through natural infection or through the vaccine.

The higher this number, the lesser is the possibility of a subsequent round of infections matching the ferocity of the second wave — or even the first wave.

UP: SHO, 3 other cops suspended over custodial death of Sultanpur man