Anti-Sterlite protests LIVE: The agitation against Sterlite Copper escalated after Vedanta Limited announced the expansion of its unit in Tamil Nadu's Tuticorin. Follow this space to track all the latest developments

A day after 12 people were killed in clashes with security forces in Tuticorin, Tamil Nadu Chief Minister EK Palaniswami on Thursday defended the police. “When someone hits you, you naturally tend to defend yourselves. so on such situations, no one acts in a pre-planned manner,” he wrote on Twitter. He also accused political parties of “misguiding protesters.” Nine were also critically injured in the clashes that broke out between police and locals who are protesting against the industrial plant.

DMK leader Stalin, meanwhile,  who was holding a protest outside Tamil Nadu secretariat, has been detained by the police. Several other leaders were detained too. The DMK and other Opposition parties in the state have also called for a dawn-to-dusk bandh on May 25, condemning the police action against protestors.

A Commission of Inquiry headed by retired Madras High Court judge Aruna Jagadeesan has also been constituted to probe circumstances leading to firing. The Centre and NHRC have also sought a report over the violence. Internet services in Tuticorin and adjoining districts of Tirunelveli and Kanyakumari have been suspended till May 27 to prevent spread of rumours through social media.

Read | Sterlite protests: All that has happened so far

Death toll at 13, including 11 men and 2 women: IG Shailesh Kumar

"A total of 13 people have died, including 11 men and women, 102 people have been injured out of which 19 are severe cases. Vehicles worth Rs 1 crore 27 lakh have been burnt down," ANI quoted Shailesh Kumar, IG (South Range) as saying.

We have cut #Sterlite's electricity, govt is also not willing to let it run. We have cut the electricity that itself shows that we want to shut it down: District Collector, #Thoothukudi. #TamilNadu

Meeting of 'Consultative Committee for Peace Restoration in Thoothukudi' underway

Photos of a vandalised ATM & vehicles set ablaze during anti-#SterliteProtests in #Thoothukudi. At present internet is suspended in the area & Section 144 (prevents assembly of more than 4 people) is imposed. #TamilNadu pic.twitter.com/dDsOIp2DQi

Describing the loss of 12 lives in violent protests in Tuticorin as “unfortunate”, Vedanta Chairman Anil Agarwal Thursday said Sterlite Copper would like to continue operations at the compnay’s plant with support from the community.

In a video message on Twitter, Agarwal claimed that the company strictly abide by the rules when it came to following anti-pollution norms. “I am very sad to hear the incident… This was absolutely unfortunate. My full sympathy is with the families (of the deceased),” Agarwal said.

Vedanta Chairman Anil Agarwal on Thursday released a video message on Twitter in which he expressed his sorrow over the loss of lives in police firing in Tuticorin. Describing it as 'unfortunate', Agarwal said the company would like to continue the business at the plant with the 'wish' of the community.

Saddened by the unfortunate turn of events at Tuticorin. pic.twitter.com/yURUUdlwn3

#Thoothukudi: TTV Dhinakaran met people who were injured during anti-#SterliteProtests and are admitted at Government Hospital. #TamilNadu pic.twitter.com/54DszZVMTi

Arrests have been made in the case: Collector

Protests in Chennai against killings in Thoothukudi

Tamizhaga Vazhvurimai Katchi (TVK) held a protest in Chennai condemning the police firing during protests in Thoothukudi that lead to death of 12 people. Fight will not stop till CM and DGP resign: Stalin

"The TN Govt has been unable to give answers to #TuticorinMassacre. We will ensure the protestors' and peoples' voices from Tuticorin are heard in Chennai. Our fight against this #IncompetentEPS Govt will NOT stop till the resignations of the CM and DGP," DMK leader Stalin who was detained earlier this morning said.

When someone hits you, you naturally tend to defend yourselves: CM Palaniswami, accuses Opposition of 'misguiding protesters'

Defending the police action against protesters, Tamil Nadu CM Palaniswami said, "When someone hits you, you naturally tend to defend yourselves. so on such situations, no one acts in a pre-planned manner." Accusing political parties of "misguiding the protesters" he said, " Some anti-social elements intruded into the agitation on May 22 and attacked the police, torched the police vehicles. Under tense situation, police resorted to firing and the firing was not pre-planned."

When someone hits you, you naturally tend to defend yourselves. so on such situations, no one acts in a pre-planned manner. #SterliteProtest

First priority to bring back normalcy in Tuticorin: District Collector

Sandeep Nanduri who took over as Thoothukudi's District Collector said his first priority would be to bring normalcy in Tuticorin. "As far as the violence, the shooting and who gave the orders for the shooting is concerned, an inquiry will be done by a judge appointed by the Tamil Nadu govt," he said, reported ANI. Sandeep had replaced N Venkatesh, while Murali Rambha took charge as district police chief

Home Minister Rajnath Singh condoled the death of the protesters in Tuticorin and asked people to maintain peace. "I am deeply pained at the loss of precious lives during the agitation at Tuticorin in Tamil Nadu. The MHA has taken cognisance of the situation and sought a report on the incident and the prevailing situation from the state government. My thoughts are with bereaved families. I also pray for the speedy recovery of the injured. I appeal to the people in Tuticorin to remain calm and maintain peace and tranquility in the region," he wrote on Twitter

Why are people protesting against Sterlite copper plant in Tuticorin?

The Sterlite protest had entered its 100th day on Tuesday, when things turned violent. In March, the residents in and around the plant conducted peaceful demonstrations at the Chidambaram Nagar bus stand in the district demanding the closure of the factory. Claiming that the water in the area has been contaminated due to the plant’s operations, the residents said that they were facing health issues. Some activists have said that the plant is posing a grave danger to the residents of the area as reports have suggested that throat and eye cancer cases have gone up in the area.

DMK leader MK Stalin, who was staging a protest outside Assembly, was detained by the Tamil Nadu police today. Slamming the police action, Stalin has demanded the resignation of Chief Minister K Palaniswami and state police chief T K Rajendran.

DMK working President MK Stalin, who was holding a protest outside Tamil Nadu secretariat over #SterliteProtests in #Thoothukudi, has been detained by the police. Several others detained too. #TamilNadu pic.twitter.com/Qr3tMyVl6W Attacking "ineffective" Chief Minister Palaniswami over Tuticorin violence, DMK chief Stalin demanded his resignation. "Even after death of 12 innocent people, no action has been taken against the culprits. CM has become ineffective. He did not bother to visit the dist & meet the people. Therefore, we demand that CM must resign immediately, DGP Rajendran must resign too," MK Stalin said, reported ANI.

On Wednesday, Stalin called the police action, a "mass murder of innocent people" and questioned the police firing. "Why were automatic weapons used to disperse the crowd and under what law is this permitted? Why were rubber/ plastic bullets or other means NOT used to avoid fatal injuries? Why was no warning given before firing?" he wrote on Twitter.

He further tweeted, “Where does the final accountability lie for the brutal murder of at least 11 Tamils? Will @CMOTamilNadu take action against DGP for failing to maintain law and order? Will Chief Secretary explain her role in this entire episode? Will there be justice for #SterliteProtest?”

'What next? excommunicate Tamilnadu?' Kamal Haasan on suspending internet services in Tuticorin

Actor-turned-politician Kamal Haasan slammed the govt for suspending internet services in Tuticorin and adjoining districts. "Internet connection cut in Thooththukkudi? Alarming! What next? excommunicate Tamilnadu? TN would see an uprising, much bigger than any, in its history. No Government is strong enough to take on the might of my people," he tweeted

The DMK and other Opposition parties have called for a dawn-to-dusk bandh tomorrow, to protest against the violence in Tuticorin. The DMK, the All India National Congress, the Dravidar Kazhagam, the Marumalarchi Dravida Munnetra Kazhagam, the CPI, the CPI(M), the Indian Union Muslim League, the Viduthalai Chiruthaigal Katchi and the Manithaneya Makkal Katchi will participate in the day-long state-wide protest," DMK's release said. "The bandh will also reflect the feelings of Tamils."

"State govt knew that this being 100th day of agitation, it's going to be bigger. They should've made better arrangements to maintain law & order but nothing was done. They simply resorted to firing. It was a massacre, almost like Jallianwala Bagh," Congress leader Ghulam Nabi Azad said, reported ANI

The Madurai bench of the Madras High Court, in an interim order, stayed the expansion of Vedanta’s Sterlite Copper’s industrial unit on Tuesday.

No fresh protest has been reported overnight, ANI reported. However, police have been deployed in large numbers in the sensitive coastal areas in order to avoid any flare up.

Enraged over videos purportedly showing a police beating a protester and personnel taking aim and firing on Tuesday, the protesters hit the streets on Wednesday and attacked police with stones, set two buses on fire and also tried to storm into a hospital where injured were kept.

The beating of a 22-year-old man, identified as Kaliappan, was purportedly captured on camera by a mediaperson. Visuals show the youth lying on the road with a group of policemen beating him and purportedly asking him to “stop acting” and get up. Both police and protesters were injured in the clashes on Wednesday.

Police said they were probing the role of a radical Left organisation in the protests and added that they had shifted their own personnel, whose faces are visible in the video clips being circulated, and their families out of the city.

Welcome to the live blog. Tamil Nadu's Tuticorin has been on a boil after 12 people were killed in police firing during protests against a Sterlite copper plant. Follow this space to track all the latest developments 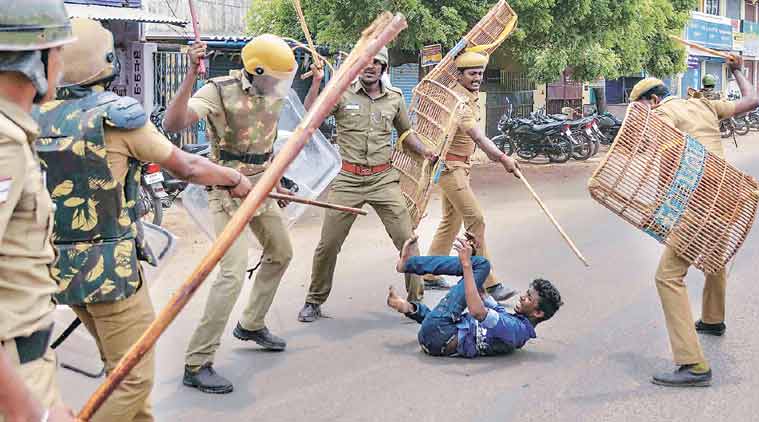 Relatives of those killed Tuesday, meanwhile, refused to claim the bodies, saying they would do so only after the copper smelter was shut and murder charges registered against those involved in the firing. The Madras High Court has directed the government to preserve the bodies until further orders. The residents have been protesting against the plant over pollution concerns since 100 days. Cited pollution from the copper plant, including issues relating to disposal of copper waste and effluents from the operational unit, the residents demanding its permanent closure.