At least 5,000 farmers, who would use water tankers or carry water in plastic containers on bicycles to irrigate their mango plants, have converted barren land into green land. (Picture by Banka administration)

A set of black pipes, part of a drip irrigation set-up, on a 17-acre patch in Ghutia village of Katoria block symbolises a transformation in Banka district. Around 42,000 acres of virtually uncultivable land in this semi-hilly area is now a profitable green patch. Farmers here grow mangoes, Arjun trees, lemon and khas grass.

Through drip irrigation and rainwater harvesting structures, digging up ponds and making check dams, the Banka district administration took up an initiative to convert this land, consisting mostly of red laterite soil, into cultivable land. It started the drive in March 2000, spreading awareness about government subsidies for raising ponds, rainwater harvesting structures and drip irrigation. Now, at least 5,000 farmers, who would use water tankers or carry water in plastic containers on bicycles to irrigate their mango plants, have converted barren land into green land. In the coming years, 10,000 farmers from six blocks of the district are expected to benefit.

Jayant Yadav, a farmer in Ghutia village, said: “We were surprised when the district administration first discussed this. Village elders laughed it away. Nothing had grown on this land for generations. Most of the plots are divided among extended families because they are of no use.”

According to Shyam Sunder Yadav, another farmer who has revamped his 30-acre plot, agriculture experts told them the land had only potash as nutrient. “They explained how micro-nutrients can be added by mixing desilted pond soil and biomass. We were also assured 80-90 per cent subsidies for ponds, rainwater structures and drip irrigation,” he said, adding how farmers of adjoining villages were now settling land disputes to join the initiative. 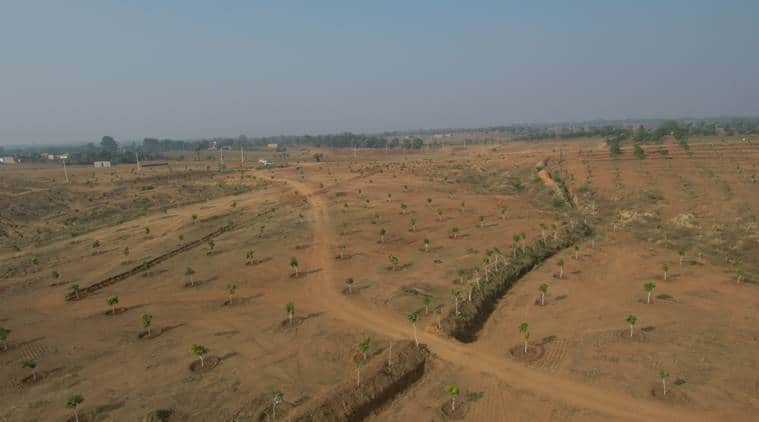 Through drip irrigation and rainwater harvesting structures, digging up ponds and making check dams, the Banka district administration took up an initiative to convert this land, consisting mostly of red laterite soil, into cultivable land.

It costs Rs 65,000 to set up a drip-irrigation system on an acre of land. The system also has to be connected to well or pond. In the last two years, 250 ponds have come up in arid belts of Bausi, Chandan, Katoria, Phullidumar and Belhar.

Then Banka district magistrate Kundan Kumar, who is now West Champaran DM, said: “During an agriculture review, I was surprised to learn that 42,961 acres of barren land — mostly arid sand laterite soil — had been never considered for cultivation. It was all private land. I decided to give it a try, and found out how the government could help people financially. Banka is the second district after Gaya in Bihar with maximum barren patches.”

He said the biggest challenge was to convince people, because the land had not been used for cultivation for generations. “But nothing is barren unless you think so.”

The first inspiration came from a progressive farmer, Chandan Kumar from Ghutia panchayat of Katoria, who had done some work with mango orchards using modern technology, especially drip irrigation. In January 2018, a meeting of farmers was called. The district administration narrowed down three methods — growing mango orchards using rainwater harvesting and drip irrigation, growing more Arjun trees, which are a natural host to silk worms, and lemon grass because it requires minimum water and stray animals do not graze on it.

In the first phase, lemon grass was attempted on a 113-acre barren patch in blocks of Katoria, Dhoraiya and Barahat in 2018. “We had a very good crop,” Kundan Kumar said, adding that lemon grass oil had a huge national market. The district administration recently started its brand called “Aroma of Banka” to create a platform to market lemon grass oil.

At Charkha Pathar village of Katoria, lemon grass farmer Harendra Sharma said: “I started growing lemon grass on my 7 acres of previously unused land. I got a bumper crop. The government got a pond constructed with subsidy. Recently, I got a distillation plant installed. Farmers are now coming to me for distillation of lemon grass.”

The chain of ponds gave farmers confidence to replicate the lemon grass experience. Lemon grass was grown on 500 acres this year. It will be extended to another 1,000 acres over the next two years. Khas was also grown on 30 acres as a pilot project in 2018.

Arjun trees (Terminalia arjuna, locally referred to as kahua tree), which needs less water, had already been growing in Banka. The trees are host to silk worms, and Banka and Bhagalpur are known for their silk. “We just needed to expand planting of Arjun trees on barren land using similar drip irrigation technology. Once the trees start attracting silkworms (which eat Arjuna leaves), farmers would contract orchards to silk traders on fixed annual or bi-annual income,” said T Ravi Kumar, a Katoria farmer.

In last two years, Arjun trees have been grown over 2,000 acres of barren land and is expected to yield Rs 5-7 crore profit from 2021, benefitting over 1,500 farmers. The trees are growing on 10,000 acres of forest land and 5,000 acres private land in Bausi, Chandan, Belhar and Katoria blocks.

The district administration worked simultaneously on water conservation. “We started making staggered trenches to break velocity of rainwater to allow land to hold some of it while it kept flowing to lower levels,” said a district agriculture officer, pointing out contour trenches around mango orchard land. While four feet deep and four feet wide structures preserve water, they also prevent animals from entering orchards. At lower levels of the barren tracts, new ponds are dug up to store water. In case of excess rains, only surplus water is allowed to escape from pond levels to rivulets.

The drip irrigation experiment was inspired by the story of a postgraduate farmer, Madhav Kumar Das. Pointing to his 12-acre plot at Tappadih village of Jaipur, he said, “Last year, I earned Rs 5 lakh just by selling watermelon. I use drip irrigation to grow potatoes and maize.”

He is the first to grow watermelon in the area, and has inspired over a dozen farmers to do the same. Das is now in a panel of the district administration as a master trainer in drip irrigation technology.

Displaying his drip irrigation set-up costing Rs 11.3 lakh (with Rs 10 lakh subsidy), he explained how micro-nutrients indigenously prepared by him are used by plants through water. “Not a drip is wasted. Drip irrigation avoids over-eating by plants,” he said.

Banka Soil Conservation Department Assistant Director Bipin Bihari Sihna said: “The Banka experiment is like creating a Sachin Tendulkar, but our challenge to make this Tendulkar play a long innings. Farmers are surely inspired and replication of three crops is happening on a big scale.”