Trump, who is set to visit India on a two-day trip between February 23-26, is scheduled to visit the Taj Mahal on February 24. 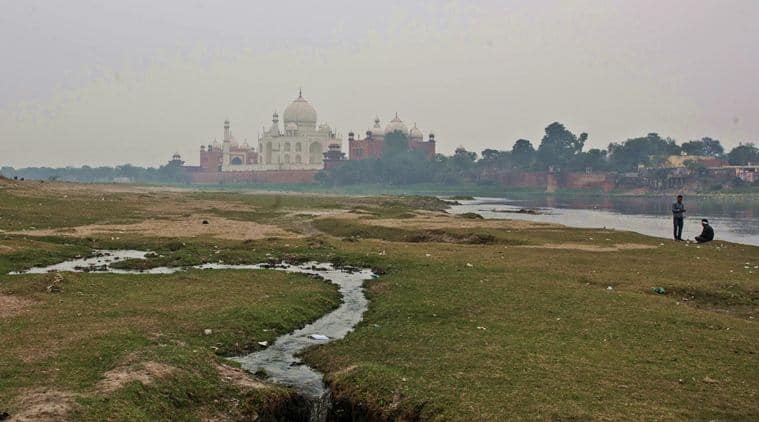 The state’s pollution control board said that the move may not make Yamuna’s water fit drinking but could reduce foul smell. (Express photo: Ritesh Shukla)

Ahead of US President Donald Trump’s visit to Agra, the Uttar Pradesh Irrigation Department has released 500 cusecs of water from Bulandshahr into River Yamuna to improve its “environmental condition”. One cusec is approximately 28 litres.

“Keeping in mind US President Trump’s visit to Agra, 500 cusecs of water has been released from the Ganganahar to improve the environmental condition of the Yamuna. This water will reach the Yamuna in Mathura by February 20 and Agra by February 21 afternoon,” the department’s Superintending Engineer Dharmender Singh Phogat told news agency PTI.

The state’s pollution control board said that the move may not make Yamuna’s water fit for drinking, but could reduce the foul smell.

“If 500 cusecs of water has been released into the Yamuna to control pollution, it will certainly have an impact. This will also improve the oxygen level in the Yamuna in Mathura and in Agra. This move may not make the Yamuna’s water fit for drinking, but could reduce the foul smell from the river,” assistant engineer Arvind Kumar was quoted as saying by the news agency.

Trump, who is set to visit India on a two-day trip between February 23-26 is scheduled to visit the Taj Mahal on February 24. He is likely to stay at the city’s Oberoi Amarvilas Hotel. With fresh coats of paint, potholes covered with dry tar and uniformly coloured shop hoardings, all possible steps are being taken by the Agra administration already to give a facelift to the city.

Trump, who is visiting India five months after PM Modi had addressed the Indian diaspora in ‘Howdy Modi!’ event in Houston, is expected to share the stage with Prime Minister Modi at a similar event which will be held in Motera’s Sardar Vallabhbhai Patel Stadium, billed as the largest stadium in the world.

The event will see Trump addressing an audience which will mostly comprise Gujarati diaspora and those having families in the US, mostly from the US, at the stadium.