To India from angry street: Thank you, help us, not our government 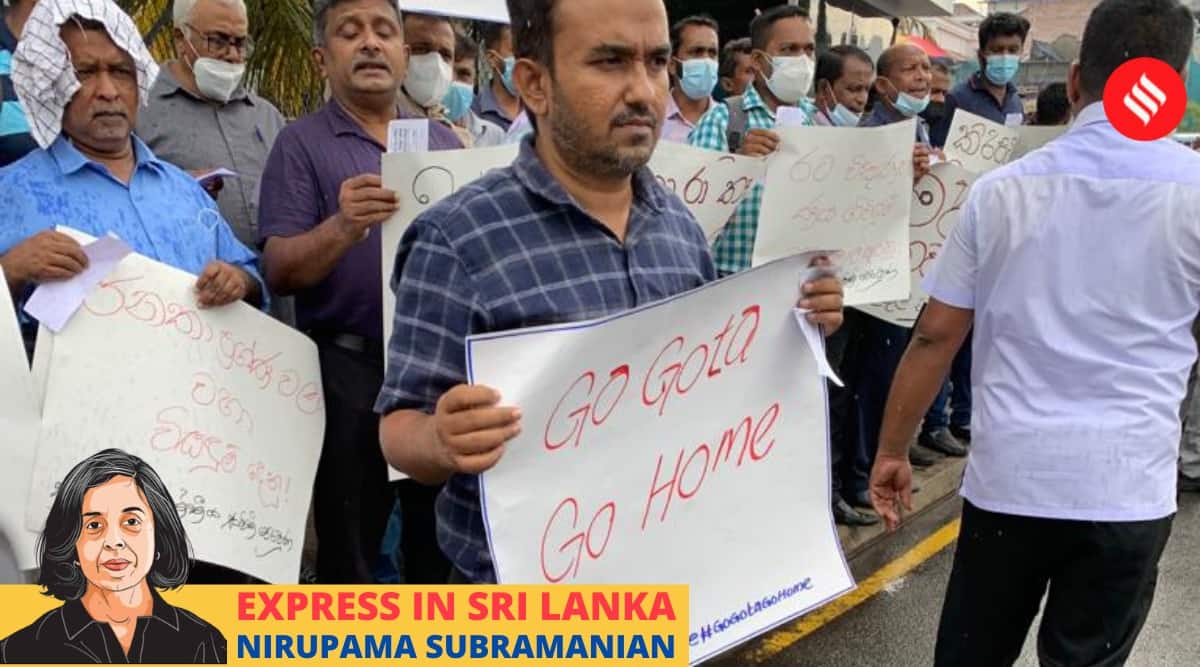 IN 2001, when the Sri Lankan economy registered negative growth of minus-1.4 per cent after a particularly bad phase in the war against Tamil Tigers, G L Peiris, then the finance minister, was asked what the fallout would be. He retorted: “When you are sleeping on a straw mat, you don’t fall off.”

Two decades on, Sri Lanka has fallen off the straw mat.

With just a week to go for the Tamil and Sinhala new year on April 14 — usually a time when all of Sri Lanka makes a beeline to grocery stores to stock up for the nearly weeklong holiday — the stores and their shelves are empty, and the lines at fuel pumps are long.

Inside homes, the mood is despondent. On the streets, there is palpable anger against the family that the Sinhala Buddhist-majority had worshipped not so long ago for defeating the LTTE.

On Friday, swarms of protesters gathered across Colombo, chanting “Go, Gota, Go”. At one of these protests near Temple Trees, the residence of Prime Minister Mahinda Rajapaksa, the elder brother of President Gotabaya, police nervously pulled tall, yellow barricades across the street.

Earlier in the day, several protesters were dispersed with teargas, perhaps for the first time since people started pouring out on the streets weeks ago to protest the crippling shortages and the massive price hikes.

If diesel is scarce, so too is milk. Sri Lanka imports almost all its dairy requirements, and shops are rationing it out even in big supermarkets.

From a massive protest near Temple Trees, the official residence of Mahinda Rajapaksa. Protesters on the traffic island and masses on both sides of the road. @tallstories reports from Colombo for The Indian Express pic.twitter.com/L0QjU0SDz6

“Only one (400 gm) packet per day per purchase,” reads a sign at Keells, the upmarket grocery. In smaller shops, customers are told they can buy a packet of imported milk powder for Rs 790, but only if they also buy four tubs of yoghurt manufactured by the same company for Rs 100 more.

Sri Lanka is a rice-growing country. But that, too, is scarce because the paddy crop failed after President Gotabaya announced a sudden switch to organic fertilisers, making it sound like a green move when, in fact, the government did not have the dollars to import chemical fertilisers.

Taxi-drivers have formed WhatsApp groups to provide real-time information about fuel stations with stocks, and pumps where queues are short. Shopkeepers call regular customers when they get a fresh supply of milk powder. Cooking gas is in short supply, and power cuts lasting hours have disrupted daily life.

Even through the worst days of the war, Sri Lanka did not experience the kind of economic collapse that it is going through now. So much so that young professionals and students have been turning out in large numbers for the protests.

At Colombo’s own Independence Square, on the steps of the grand memorial hall, protesters holding placards declared: “You messed with the wrong generation.”

At Colombo’s own Independence Square, protesters holding placards declared: “You messed with the wrong generation.” (Express Photo by Nirupama Subramanian)

Vinura, a 21-year-old student, said: “This mismanagement is affecting our future, our country’s future. People don’t have anything to eat, everything is so expensive.”

Some of the shortage is expected to ease in the coming days.

According to Indian High Commissioner Gopal Baglay, a portion of the first order of 40,000 metric tonnes of rice under India’s $1-bn credit line for food is on its way. India has also delivered a total of 2,70,000 mt of diesel, petrol and aviation fuel, so far.

And yet, this time, Delhi seems to be conscious that the assistance it is sending should not be misread as a bailout for the Rajapaksas.

Baglay said India’s development co-operation over the last decade, which was worth over $3.5 bn — excluding the present assistance — for housing, agriculture, education, training, etc., was always “driven” by needs of the people. “Sri Lanka’s relations with India have brought benefits and development to the people of Sri Lanka,” he said.

India’s assistance is a humanitarian gesture for the people of Sri Lanka to ease their suffering during the crisis, Baglay said. “Other than government to government, it is also humanitarian assistance,” he stressed, even as slogans against the Rajapaksa family grew louder on the streets.

At one of the street protests, a participant told The Indian Express: “I want to tell the Indian government, do not support the Rajapaksa government. We are extremely thankful for all the assistance India has sent to Sri Lanka, but India must side with the people.”