TMC Martyrs' Day Rally in Kolkata Today HIGHLIGHTS: The rally is Mamata Banerjee's flagship political event where she addresses in the heart of Kolkata to commemorate the police firing in the state capital on July 21, 1993.

TMC Martyrs’ Day Rally in Kolkata HIGHLIGHTS: West Bengal Chief Minister Mamata Banerjee Sunday addressed the Trinamool Congress’ (TMC) annual Martyrs’ Day rally in Kolkata. Slamming BJP and CPM in her address, the TMC chief said she would not allow “communalism and goondaism in the state” and added that she will launch a statewide protest against the saffron party. She also accused the central agencies of threatening TMC leaders and elected representatives with imprisonment in chit fund scam cases if they do not collude with the BJP.

Martyr’s Day has been an annual event in the TMC calendar to commemorate the 13 people killed in police firing during a political demonstration led by Mamata, who was then a Youth Congress leader. She, along with Youth Congress members, demanding that the Voter’s Identity Card be made the sole required document for voting.

READ | For Martyrs’ Day rally, TMC workers from across state head to Kolkata

At today’s rally, Banerjee is likely to announce the roadmap for the upcoming 2021 state Assembly elections.

This year’s Martyrs’ Day rally is being held in the backdrop of the Lok Sabha polls, where the Trinamool lost considerable ground to the BJP. What roadmap has Mamata Banerjee chalked for the upcoming assembly elections? Here are the HIGHLIGHTS:

West Bengal Chief Minister Mamata Banerjee Sunday alleged that central agencies are threatening TMC leaders and elected representatives with prison in chit fund scam cases if they don't get in touch with the BJP.

"Central agencies are threatening our leaders and elected representatives over chit fund scams, asking them to get in touch with the BJP or face prison," Banerjee said.

She also said that just like Karnataka, the BJP is trying to lure TMC MLAs by offering Rs 2 crore and a petrol pump to switch over.

In a sharp attack at CPM and BJP, Mamata said, "CPM is shameless. BJP is old CPM in new bottle," and asserted she would not allow communalism and goondaism in the state. She added that BJP would lost next polls in West Bengal.

Mamata criticising BJP said that she would initiate a state-wide protest on July 26 demanding return of black money 'siphoned off' by BJP. "Just like in Karnataka, BJP is indulging in horse-trading everywhere," she alleged. The TMC chief further added: "Credit for smooth functioning of Parliament goes to opposition parties, not those in power."

"In Lok Sabha elections they (BJP) won by cheating- by using EVMs, CRPF and Central Police & Election Commission They just got 18 seats, by getting few seats they are trying to capture our party offices and beating our people," alleged Mamata Banerjee at the rally today. She said that she would request the Election Commission to conduct Panchayat and Municipal elections through ballot paper.

The rally is Mamata Banerjee's flagship political event where she addresses in the heart of Kolkata to commemorate the police firing in the state capital on July 21, 1993.

Addressing the Martyrs' Day rally in Kolkata, TMC Chief Mamata Banerjee attacked BJP for vandalising a Vidyasagar statue in May. "BJP is high on power. Wake up people and counter BJP. Bengal has seen golden days under TMC," she said at the rally. Taking her request further, Banerjee urged paper ballots to return and for people to shun EVMs, adding, "2019 election is not a history but a mystery"

West Bengal Chief Minister and TMC supremo Mamata Banerjee on Sunday paid tribute to all the "martyrs" during 34 years of Left rule in the state, and urged people to fight for restoration of democracy in the country. She also remembered 13 Youth Congress activists who were killed in police firing on this day in 1993. Banerjee was a leader of the Youth Congress at that time, when the Left Front was in power in West Bengal.

Today is the historic #21JulyShahidDibas. On this day, 26 years ago, 13 youth workers were killed in police firing. Since then, we observe this day as #ShahidDibas. My heartfelt tribute to all the martyrs who were killed during the 34 years of Left rule 1/2

What to expect from Mamata in today's rally?

Mamata, who faces public anger for a variety of reasons, last month called upon her party leaders and public representatives to return illegal commissions or “cut money” they had taken from the public to facilitate their benefits from government schemes. This galvanised demands from beneficiaries of government schemes for Trinamool leaders to return their money.

Although considered to be an image-boosting measure, some leaders of the party feel this might backfire, because the BJP is describing it as a confession by the Trinamool of its “culture of corruption”, and providing moral support to the protesting beneficiaries. The Trinamool has been forced to clarify that the overwhelming mass of its leaders was clean, and that Mamata’s message was directed at a very small minority within the party.

In Pics | TMC supporters in various parts of Kolkata 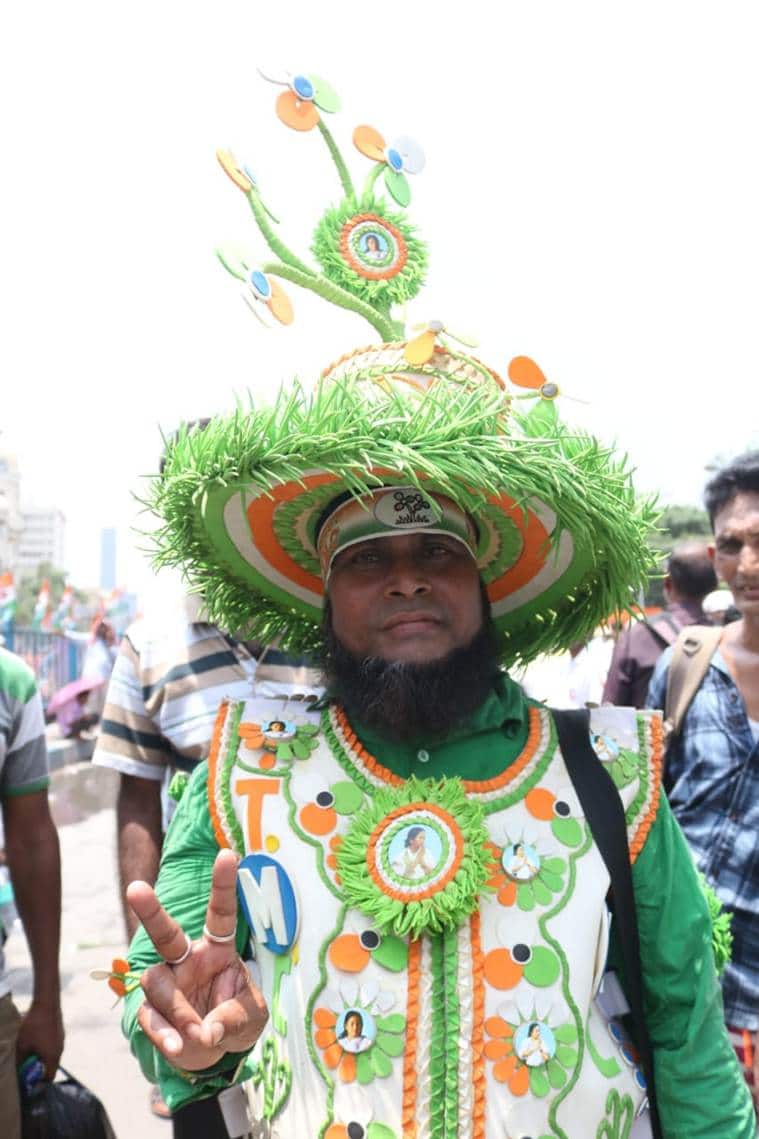 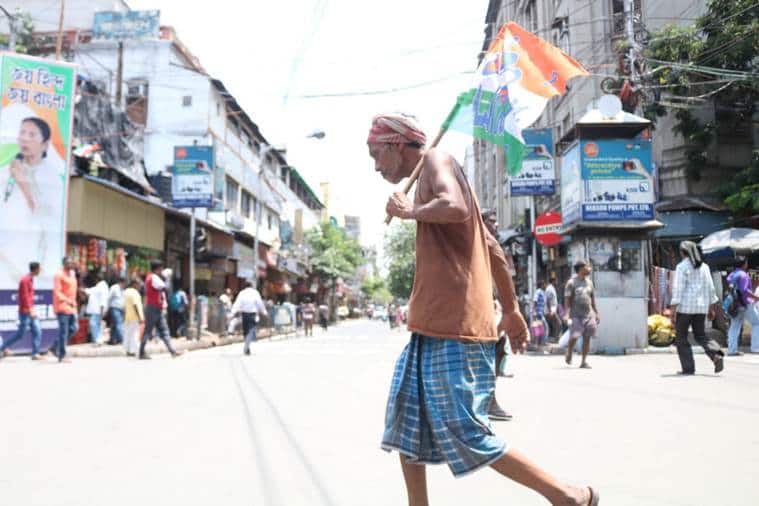 Why is today's rally important for Mamata and TMC?

This year’s Martyrs’ Day rally is being held in the backdrop of the Lok Sabha polls, where the Trinamool lost considerable ground to the BJP, which has emerged as a powerful political force in West Bengal, and the main challenger to the ruling dispensation.

The TMC, which won 22 seats in the Lok Sabha elections of this summer, 12 fewer than in 2014, is under great pressure from the BJP, which shot up to 18 seats from a mere 2 seats in 2014. There is visible support for the party on the ground across the state, and a large number of TMC leaders and councillors from various ruling party-led civic bodies have defected to the saffron camp.

Kolkata: In 1993, 13 people people had died during a protest after police opened fire at them

Kolkata: West Bengal Chief Minister Mamata Banerjee to address a rally in Dharamtala later today, on 'Martyr's day'. In 1993, 13 people had died during a protest on Mayo Road after police opened fire on them pic.twitter.com/uqHCVaxitd

Most of the party workers had come from Cooch Behar, Alipurduar, Jalpaiguri, Darjeeling, North Dinajpur, South Dinajpur, and Malda districts. TMC Diamond Harbour MP Abhishek Banerjee visited the Central Park camp in the evening to check the ongoing preparations for the rally and interacted with the party workers. Mamata Banerjee reviewed rally arrangements at the Esplande in Kolkata yesterday
Why does TMC conduct its annual Martyrs' Day rally?

The July 21 Martyrs’ Day Rally is Mamata’s flagship political event. It is mass rally that she addresses in the heart of Kolkata to commemorate the police firing in the state capital on July 21, 1993, in which 13 people were killed during a demonstration by the West Bengal Youth Congress — led by Mamata at the time — demanding that the Voter’s Identity Card be made the sole required document for voting in order that stop is put to the CPM’s alleged “scientific rigging”.

For Martyrs’ Day rally, TMC workers from across state head to Kolkata

TMC workers from North Bengal started flocking to Kolkata from Friday to attend the party’s annual Martyrs’ Day rally today to be addressed by Mamata Banerjee. In order to accommodate these workers, the party has set up four major camps across the city — Gitanjali Stadium in south Kolkata, Central Park in Salt Lake, Uttirna in Alipore and Khudiram Anushilan Kendra in central Kolkata.

Welcome to our LIVE Blog!

Commemorating the 26th Martyrs' Day, Trinamool Congress President and West Bengal CM Mamata Banerjee will address the annual rally today in Kolkata. The rally is being watched closely and has scores of party workers coming to the state capital as Banerjee is expected to chalk out the strategy for the 2021 assembly polls. Stay tuned to this space for the latest updates. TMC Martyrs' Day Rally in Kolkata HIGHLIGHTS: For the first time since storming to power in West Bengal in 2011, Mamata Banerjee’s party has found itself in rough waters, struggling to cope with its challenges. So much so that the party has felt it necessary to rope in political strategist Prashant Kishor — the man best known for contributing to Narendra Modi’s 2014 election strategy — to prepare its strategy for the 2021 Assembly elections.

Mamata, who faces public anger for a variety of reasons, last month called upon her party leaders and public representatives to return illegal commissions or “cut money” they had taken from the public to facilitate their benefits from government schemes. This galvanised demands from beneficiaries of government schemes for Trinamool leaders to return their money.

All of this makes this year’s Martyrs’ Day rally different, and important. Under these circumstances, the party’s rank and file are looking to Mamata for directions. The Chief Minister has traditionally used the dais of this annual rally to describe the party’s political roadmap.