Thunderstorm alert Highlights: The fresh round of stormy weather is unlikely to be as devastating as the one that was witnessed last week. On Sunday, the IMD warned people especially in northern and eastern states to brace for extreme weather.

Thunderstorm alert Highlights: The fresh round of stormy weather is unlikely to be as devastating as the one that was witnessed last week.. (Express photo by Amit Mehra)

A week after dust storms wreaked havoc in west Rajasthan and parts of Uttar Pradesh, killing 124 people and leaving more than 300 injured, thunderstorms accompanied by squall and heavy rains are likely to occur in at least 20 states and two Union Territories across the country on Monday and Tuesday, the India Meteorological Department has predicted. However, the fresh round of stormy weather is unlikely to be as devastating as the one that was witnessed last week. In its evening bulletin on Sunday, the IMD warned people especially in northern and eastern states to brace for extreme weather. Following the warning, the Haryana government has decided that all government and private schools in the state will remain closed on the two days. The Himachal Pradesh government has alerted all deputy commissioners and sub-divisional magistrates to remain alert on Monday. Follow today’s Thunderstorm alert LIVE UPDATES

No rain in Gujarat, says IMD Visuals of the dust storm from Haryana's Gurugram

Visibility down due to dust storm

Visibility has decreased due to the dust storm. Seen here are visuals from the Ring Road in the national capital. (Express Photos by Abhinav Saha) 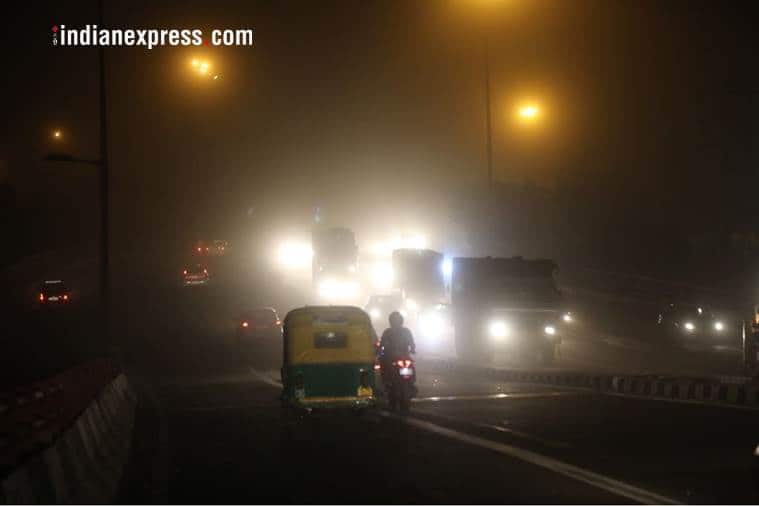 A dust storm has hit Delhi and parts of NCR.

Strong winds along with rain have hit Delhi, Gurgaon and adjoining parts of NCR. The Meteorological Department earlier warned of rain in the national capital, while a dust and thunder storm may hit the city in the next 24 hours. Delhi, Greater Noida, Faridabad, Ballabhgarh, Khurja are expected to receive rainfall on Monday.

Pictures of rain in Ludhiana by Express Photographer Gurmeet Singh 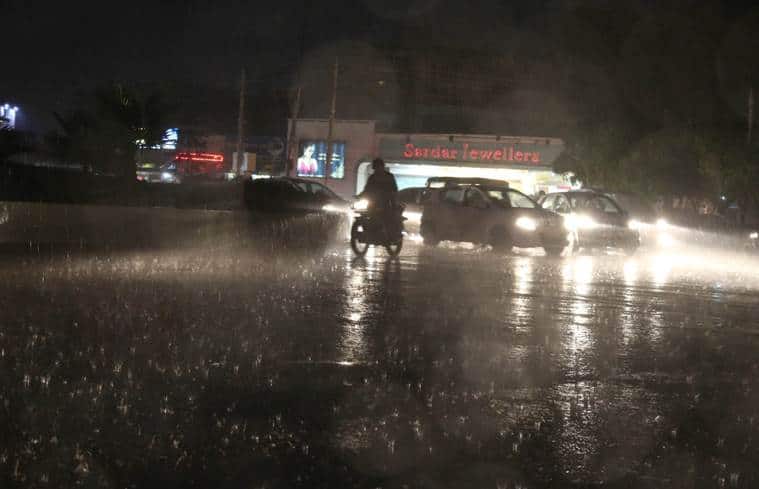 People residing close to NCR should get to safe places

The India Meteorological Department issued thunderstorm with light rain and strong winds over NCR including Hisar, Jind Rohtak, Bhiwani and Narnaul in next two hours.

And it’s raining in Hubli. pic.twitter.com/BN1o7lBsHq

After Delhi, all schools and Anganwadi centers in Dehradun to remain closed tomorrow. Thunderstorm and hailstorm alert has been issued for Dehradun district for the next 48 hours.

The Haryana government has cancelled leave of all officials in municipalities across the state, in view of the IMD issuing an alert forecasting thunderstorm and squall tomorrow in several parts of north India. Fire and other emergency services, too, have been directed to remain alert.

The directions were issued by the state government after a meeting of Haryana Urban Local Bodies Minister Kavita Jain with senior officers of her department here.

The Delhi government Monday decided to close all evening schools tomorrow following the weather department's warning about heavy rains and thunderstorm. The decision was taken at a high-level meeting chaired by chief secretary Anshu Prakash to review preparedness in the wake of the warning.

Watch video of sandstorm in Bikaner

There are four types of colour codes signifying the level of caution -- green (which means no action), yellow (a situation to be watched), amber (government agencies to be prepared for severe weather) and red (action needed by the agencies).

Unseasonal snowfall in higher reaches of Jammu and Kashmir

The Delhi traffic police issued weather advisory for commuters. It has alerted forces on the field to be on the alert and to ensure that obstacles such as fallen trees were removed. The Delhi government has also put search and rescue teams on standby in every district following the meteorological department's warning about heavy rains and thunderstorm. The revenue department of the government has issued directions to all district officers and said water and power utilities would also keep restoration teams ready.

“The thunderstorm activity is already under progress in many parts of the country and we have been issuing alerts regarding that. But the activity is likely to intensify and strengthen over the next two days,” Mrutyunjay Mohapatra, head of services at IMD, told The Indian Express.