He always saw himself as a national leader, and has rewritten history – and geography – before with Telangana movement. But has TRS founder K Chandrashekar Rao overreached himself now? 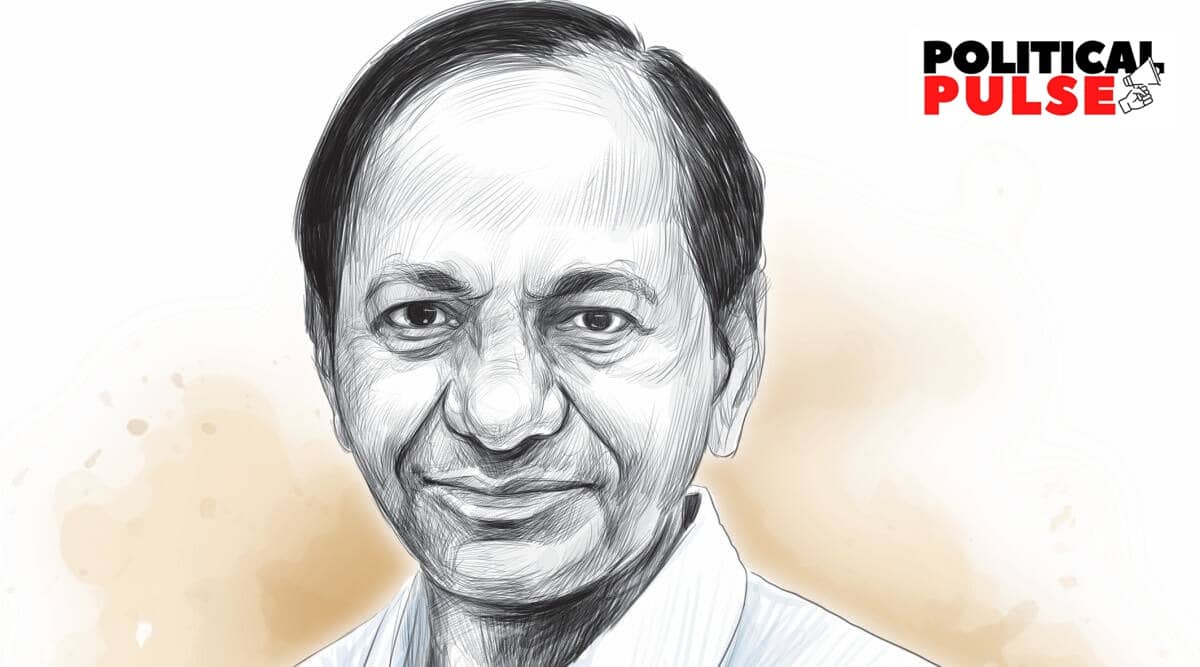 Kalvakuntla Chandrashekar Rao or KCR has always believed he is destined to play a major role in national politics. With the BJP snapping at the TRS’s heels in Telangana, and the space vacated outside due to a shrinking Congress, there may be no better time than now.

KCR also believes he has a sense of history. On April 27, 2001, when he founded the Telangana Rashtra Samithi (TRS) with the aim of fighting for the long-standing demand for a separate state of Telangana, the Telugu Desam Party (TDP) was all-powerful and Y S Rajasekhara Reddy a rising star in the Congress. By 2014, he had ensured his goal of Telangana, wiping out both the TDP and Congress in this part of united Andhra Pradesh, and returned to power in December 2018 with an equally overwhelming majority.

Also Read |In KCR national leap, the bounce that ‘partner’ JD(S) is hoping for

Now, formally taking the leap to the national stage, KCR announced on Dussehra Day that the TRS would henceforth be known as the Bharat Rashtra Samithi (BRS), and contest across several states in the 2024 Lok Sabha elections.

Born in Chintamadaka village in Medak district, the well-read KCR who holds a Master’s degree in Telugu literature from Osmania University, started his political journey in the Youth Congress in the 1970s. An admirer of superstar N T Rama Rao, he joined the TDP when NTR launched it in 1983, and rose to become a senior leader before N Chandrababu Naidu started his climb.

The TDP made KCR in-charge of the undivided districts of Adilabad, Medak and Nizamabad, and he was a minister in the NTR and Naidu governments. Apart from his first election in 1983 from Siddipet Assembly constituency, he never lost.

A TRS leader close to KCR says it was the Naidu government’s “neglect” of the Telangana region that distanced him from the TDP. “KCR wanted a platform to renew the demand for a state, and there was no space for him in any political party. It was then that he decided to chart his own course, and the rest is history,’’ the leader says.

The break came on April 27, 2001, when KCR quit the TDP, resigned as Deputy Speaker and MLA, and launched the TRS, calling Telangana its sole objective.

TRS leaders point out that KCR waited long and patiently for the Centre to fulfill the demand. In 2004, elected to the Lok Sabha from Karimnagar, he extended support to the UPA government. He was inducted into the Cabinet, but then kept waiting for a portfolio for several days and eventually given the relatively minor one of Labour and Employment. Meanwhile, the UPA government dilly-dallied on his demand for Telangana.

After serving for two years, KCR finally resigned from the UPA, withdrew support to the Manmohan Singh government, and dived headlong into the separate state movement.

An electoral debacle followed, one that many expected to end the careers of KCR and derail the Telangana movement. But luck and history again proved to be on KCR’s side, with the tragic death of Y S Rajashekara Reddy in a chopper crash three months after coming to power, removing the one Congress leader who stood against the division of Andhra Pradesh.

Again, fortune smiled on KCR when the Congress mishandled the transition after Reddy’s death, ignoring his son Jagan Mohan Reddy’s popular claim to the CM post, and appointing Konijeti Rosaiah instead. KCR hit when the iron was hot, renewing the separate state movement and rallying support in the Telangana region, with rallies, bandhs and protesters laying siege to Hyderabad.

He invoked regionalism to great effect, attracting students, government employees, farmers, and women to his cause. On his orders, government employees would go on strike for weeks, enduring pay cuts. Osmania University and other educational institutions became hotbeds of the agitation, with several students committing suicide.

Meanwhile, the loyalists of the late Y S Rajashekhar Reddy made it difficult for the Rosaiah government to function.

On November 29, 2009, KCR started a fast unto death, setting off a fresh round of violent protests. After 11 days, with KCR’s health deteriorating, the Centre finally capitulated and agreed to move a Bill.

Editorial |Deccan dreams: Why TRS’s name-change is not enough for it to occupy space on the national stage

A former Congress MP said KCR had more in store for the party. “Everyone was under the impression that having achieved its objective, the TRS will merge with the Congress.” However, after the Andhra Pradesh Reorganisation Bill, 2014, was passed in Parliament, amid much drama, KCR thanked Sonia Gandhi and then dropped the bomb. “We have achieved Telangana, now it is time for development of the state,” he said in New Delhi.

A few days later, back at the TRS headquarters Telangana Bhavan, he told the media that the Congress was a sinking ship and there was no question of a merger.

In the first polls in Telangana in 2014, the TRS won 63 of the 119 Assembly seats and 11 of the 17 Lok Sabha seats. In the days that followed, over 20 MLAs of other parties switched to the TRS. The Congress won 21 Assembly and two Lok Sabha seats.

The Congress didn’t just lose out on getting any poll benefits from creating Telangana, it was also wiped out in Andhra Pradesh, which was angry over the division. That was a major blow to the party from a region that had given it 42 Lok Sabha seats in 2014.

Also Read |‘A national role model’: KCR, in the eyes of his new friends, in the words of his office

Known for his wit, repartee and sharp rebukes, KCR was asked by someone if the Congress should get the credit for passing the Andhra bifurcation Bill. “Gandhi and Nehru fought for Independence. Did people rush to garland Queen Elizabeth?” he said.

TRS MLA Balka Suman says KCR “hit the ground running” as CM. “He used to say that there was so much work that 24 hours in a day was less,” Suman says, listing his infrastructure projects, schemes like Rythu Bandhu, old age pensions. Farmers remain central to KCR’s politics, and he calls himself a farmer and spends considerable time at his farmhouse at Erravelli in Siddipet district.

There are also large projects like the Kaleswaram irrigation project, Mission Kakatiya to repair ponds, lakes and tanks, Mission Bhagiratha to provide drinking water, and a grand renovation of the Yadadri Temple.

While in 2018 his tally further soared, KCR also hit controversies such as the reconstruction undertaken of the Secretariat building to make it “Vaastu compliant”, staying away till this was completed. Over Rs 600 crore was spent on the project.

Opposition parties have called the projects examples of KCR’s autocratic behaviour, and accused his administration of corruption. In May 2017, his move to shift ‘Dharna Chowk’ in Hyderabad, a popular protest site, to 40 km outside the city, citing traffic inconvenience, drew much criticism.

Both the Congress and BJP also accuse KCR of running “a family government”. His son K T Rama Rao is the most powerful minister in KCR’s Cabinet, holding the portfolios of IT, Industry, Municipal Administration and Urban Development. His daughter K Kavita is a former MP from Nizamabad, and is currently an MLC.

BJP national secretary Tarun Chugh recently said that one family runs the Telangana government and other Cabinet ministers have no work.

Before he realised the challenge posed by the BJP, KCR had ensured a cordial relationship with the Narendra Modi government, remaining neutral or supporting it on demonetisation, GST and other contentious issues.

The rift finally spilled over into Delhi too this year, over paddy procurement. When the Centre refused to procure excess paddy from Telangana, leaving KCR facing angry farmers at home, he lashed out at Modi, calling him a fascist and dictator.

But more than paddy, KCR’s anxiety stems from the BJP’s poll plans. In 2014, the party had won five Assembly seats and one Lok Sabha seat in the state. While in 2018, the TRS reduced the BJP to just one seat, the party has been making consistent inroads, seeing a rich ground for attracting the Hindu votes in a state with a very high Muslim population.

Since 2018, the BJP has won two Assembly bypolls, and put up a stunning performance in the Greater Hyderabad Municipal Corporation election in December 2020. As the TRS lost about half of its sitting seats to the BJP, for KCR, it was time to test history again.

Telangana PCC chief A Revanth Reddy said this was set to backfire on KCR. “For the past 21 years, KCR has used the Telangana sentiment to grow politically, and now that he realises that he cannot exploit it any longer, he is going national. It is overambitious and a misadventure,’’ Reddy said.

BJP leader K Krishna Sagar Rao said KCR is trying to remain relevant at a time when he is struggling to keep his government operational financially. “It is self-sabotage. The change of name from the TRS to BRS will lead to KCR losing his home turf, even as he embarks on a wasteful national ambition,” he said.

On KCR’s claims of a “Telangana Model”, Sagar Rao said this exists only in the imagination of the CM. “One can’t sell a model to the nation, which doesn’t exist.”

Kings, queens, pawns and intrigue — all in 64 squares