Temple is one party’s agenda, not for NDA or Govt, says ally Chirag Paswan

Speaking to The Indian Express, Chirag, who is also the LJP parliamentary board chairperson, said the BJP should not allow anyone to “create confusion among the people by raising issues like Ram temple construction and Bajrangbali caste”. 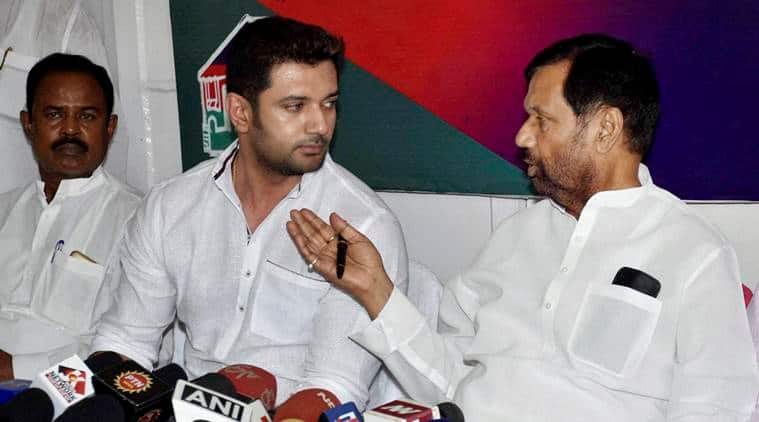 Suggesting that the BJP stick to its development agenda in the run-up to the Lok Sabha polls in 2019, LJP chief Ram Vilas Paswan’s son and Jamui MP Chirag Paswan said that the Ram temple can be an agenda for only a party and not the NDA or the central government. Speaking to The Indian Express, Chirag, who is also the LJP parliamentary board chairperson, said the BJP should not allow anyone to “create confusion among the people by raising issues like Ram temple construction and Bajrangbali caste”.

He said: “We have clearly said in the NDA meeting on December 10 that we should stick to our development agenda. Some people raising issues like the Ram temple (construction) and Bajrangbali (UP CM Yogi Adityanath had called Lord Hanuman a Dalit) only confuses people. The temple can be the agenda of one party but not of the NDA or government. Let us wait for the court’s order on it.”

Asked if the LJP, like NDA ally JD (U), had also decided to oppose an ordinance on the construction of a Ram temple, Chirag said: “It is a hypothetical situation. Our stand is clear – we will abide by any verdict given by the court. As for the ordinance, I do not see it coming. The BJP has not yet discussed this with alliance partners. I do not think the government will bring an ordinance on it.”

Chirag, who has been looking after his party’s affairs with his father not being in the best of health, said he had appealed to Prime Minister Narendra Modi to focus on the youth and farmers. “It is the youth who played a big role in making Narendra Modi the PM in 2014…there has been some resentment among farmers. Though our government has done some good work for farmers, we have to review the issues of farmers.”

According to Chirag, the recent Assembly poll results, when the BJP lost three Hindi heartland states to the Congress, required a shift in strategy but was “no reason for disappointment”. “The BJP got 0.1 per cent more votes than the Congress in Madhya Pradesh and was only 0.5 per cent lower than the Congress in Rajasthan. Chhattisgarh is surely a matter of concern but MP shows that despite triple anti-incumbency, the BJP still has a good hold in the state,” he said.

“Our focus needs to be only on development. We know Ram temple has long been part of the BJP agenda but as an ally, we expect development to be the core NDA agenda.”

Chirag also partially agreed with JD (U) national vice president Prashant Kishor’s reading that the BJP’s popularity had slumped from 2014. “When there is a government for 4-5 years, some anti-incumbency does creep in. But having said this, when we hit the ground, we still find the NDA far ahead and the PM is still popular,” he said adding that confusion had been also created about the Ordinance on the SC/ST Act amendments.

“One should know the Act is not against upper castes as some people are trying to suggest but it is against criminals. The Act is not being misused, it was only made stronger,” he said.

[ie_backquote quote=”“Our focus needs to be only on development. We know Ram temple has long been part of the BJP agenda but as an ally, we expect development to be the core NDA agenda.”” cite=”Chirag Paswan”]

Chirag, however, denied that LJP had been more aggressive and assertive after the BJP’s poll debacle. “I would not call it aggression. We are an ally and will surely talk about NDA priorities,” he said.

He also denied claims of RJD leaders Tejashwi Prasad Yadav and Raghuvansh Prasad Singh that the LJP has been in touch with them.”I have also heard rumours about my party being ready to crossover to another side. It also makes me laugh to hear that my father wants to quit the NDA and that I am resisting it. Let me say with full authority as LJP parliamentary board chairperson and also on behalf of our national president that we are strongly with NDA.”

According to Chirag, the RLSP quitting the NDA will not impact its chances. “I have tried my best to hold Upendra Kushwaha back but he had been riding two boats for a long time. He chose the public domain rather than the NDA forum to air his grievances. But his exit will not hurt us. The BJP, JD (U) and LJP are a formidable combination. In any case, we should back our strength instead of talking about the Opposition’s strength”, he said.